A Mirror in the Sky: Camille A. Brown’s Black Girl: Linguistic Play – The Feminist Wire

A Mirror in the Sky: Camille A. Brown’s Black Girl: Linguistic Play 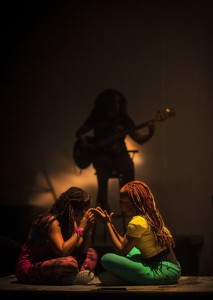 As I was watching Camille A. Brown and her dancers in Brown’s latest work, Black Girl: Linguistic Play during a run through on Sunday afternoon I kept thinking, “so, this is what that feels like.” I understand that the range of human emotion is full and complex. We feel things we haven’t developed the language to explain and the words we do have for the emotions that move through us are often inadequate. But, sitting in the Joyce Theater witnessing Black Girl LP was the first time I sensed that I was feeling something I had never felt before. This is what it feels like to have yourself handed back to you, to be honored with the gift of your contradictory, hard won, still in process, beautifully flawed, inimitable self. This is what people want you to feel when they casually say, ‘I feel you.’ This is what it might feel like to live in a world where you are seen.

The tangled and painful history of Black women and representation is well known, even if simultaneously denied by those with the power to create representations and engineer their enduring impact. This is why the past few days, which have included Viola Davis fearlessly calling out white privilege in all of her Emmy winning glory and President Obama’s centralizing Black women and girls in his speech at the Congressional Black Caucus, matter so much as more than just nods of recognition or appreciation. To be properly named is a validation that you are not, in fact, crazy. Because not seeing yourself can literally make you feel insane.

Black Girl: Linguistic Play is Camille A. Brown’s divine intervention in our relationship with ourselves. This full evening length ballet features an all woman cast and is comprised of three duets. The opening duet between Camille and Catherine Foster (Cat) is a study in Black girl rituals of space making and space claiming. The two dance with the ease and beauty of girls who can confidently take up room in their homes and neighborhoods because these are the spaces that, for better or worse, grew them. There is a floor to ceiling blackboard upstage left that partially covers the brick wall backdrop. Words and images written in colorful chalk by the dancers themselves cover the entire board. Camille and Cat fly across the stage on four raised platforms of varying heights. The precision in their intricately rhythmic movement is exhilarating. They take an almost irreverent type of care with their bodies and how they move in them. Is there such a thing as strategic freedom? I see it sometimes in the movements and voices of pairs and trios of teenage Black girls in public. I don’t know that I’ve ever felt it until now. This is serious play.

Camille stops to turn her face and then extend her arm to the sky. Still looking up, she touches her hair and the side of her jawline, angling her head to get a better glimpse of herself in one of the seven mirrors affixed to the ceiling. In that moment and in the others that follow where the dancers shift their gaze, expand their chest, float an arm, or extend their fingers upward, looking for themselves and ultimately seeing their self-defined humanity becomes an exalted act.

At a point in her solo before Cat’s entrance, Camille takes a piece of chalk in her hands and rubs her palms together to create a cloud of white dust. The dust dances with the stage lights to create an illuminated halo that briefly encircles Camille. But then, she moves again and the cloud is at her feet, dust trailing her in syncopated puffs that keep time with her feet. As the piece progresses through two more solos, the play in and on chalk continues.

Beatrice Capote and Fana Fraser guide us through a duet that starts from a place of giddy girlhood innocence to the futile competitions we stage within our own bodies and against ourselves, just as much with one another, in a quest to feel beautiful, sensual, seen. Throughout this duet Beatrice and Fana break each other’s hearts and ours, piece them back together again, and then dance along the cracks they can’t meld back together. The duet takes the pair back to the blackboard where they slam themselves against the board, backs to the wall. They hold onto one another and squirm out of the other’s grasp all the while sliding, dipping, and falling along the board. The flat immobile wall forces a two-dimensionality that Beatrice and Fana fight against through every movement and gesture they make. The wall is backbone and barrier. It holds them up and confines them. By the end of the duet, they are covered in chalk from the pictures and tags they wrote on the board, and we actually see the narrative residue from the stories they struggle to write about themselves on their bodies.

It is hard not to replay every moment of BGLP because Brown’s choreography is so textured and rich. I was at opening night last night and experienced details and nuances that escaped me in the run through. There are no movement or narrative clichés in Brown’s work. And, although you will recognize yourself in the piece, you won’t be able to predict what that self will look like or how you will be ultimately changed after Brown asks you to bear witness to your own complicated story. You need to see this. I am concerned about you and your overall health and wellbeing. So, I will say it again, you NEED to see this.

I won’t even write extensively about the third duet with the glorious Yusha-Marie Sorzano and Mora-Amina Parker. You have to feel for yourself. But, I will say that I have never experienced an expression of life through dance that was this painfully beautiful. Their movements ache with a vulnerability that is so tender so strong and so clear, you can feel their fingers on your own skin when they touch one another. The visceral impact of this duet is a testament to Sorzano and Paker’s fearless honesty in embodying their (our) experience. Go. Feel. Yourself.

Each performance of Black Girl: Linguistic Play is followed by a moderated dialogue with the full company and the audience. This is not superfluous but an integral part of Camille Brown’s process and central to the completion of the final staged performance. Stay for this.

The brilliant Scott Paterson on piano and Tracy Wormworth on bass guitar provide the original compositions that are more co-text than subtext to the narratives that unfold.

For more information and to purchase tickets (if you can still get one): http://www.joyce.org/performance/camille-a-brown-dancers/#.VgKiHY9Viko