Lydia took the rat tail end of the comb and slid it over her daughter’s scalp. The hair’s thickness reminded Lydia of the blue wildrye that Rochelle had braided in the woods behind the domestic violence shelter where they currently lived. “Public art,” Rochelle had said about the closed lotus formation that emerged in the grass. “Somebody will stumble across this and be amazed.” Like the tall blades of grass that Rochelle had separated that day, the strands of Lydia’s daughter’s hair appeared finer and vulnerable when manipulated from their upright position.

“Pass me the grease,” Lydia said.

Her daughter raised a jar of oily yellow paste. Lydia scooped a hunk of it with her finger and smeared that onto the back of her left hand. Then she rubbed her right index finger into the grease. With her finger she spread the slick oil along the parts; first, she oiled the part that went from the girl’s forehead to her crown, then she oiled the part that went from ear to ear.

“How long this gon’ take?” her daughter asked.

“I’m not acting new,” the girl said. She was too fragile, always teetering on the verge of tears.

The girl huffed defiantly. She sat on the floor of the shelter’s recreation room. Lydia sat behind her on the sofa, her legs straddling the girl, a pillow propped behind her on the couch to support her lower back. Her daughter patted the floor with one hand until she felt the t.v.’s remote control come within her grasp. She picked it up and began surfing through cable channels. She had clicked past a reality show and a Honda commercial when Lydia commanded her to stop.

On the screen was a church funeral and at the bottom of the screen on a little banner were these words, “Breaking News.” It was the televised funeral of another black boy who’d been shot dead by police for no reason. That made five in almost as many months. Behind the pulpit dozens of politicians, activists, clergy—but also the boy’s grieving parents—stood shoulder to shoulder while dressed in dark clothes. Even as they waved church hand fans, everybody looked sweaty and hot. A celebrity pastor was giving the sermon, his voice raspy as he shouted. Lydia and her girl watched for several minutes. They were speechless. “So sad,” Lydia said, finally breaking their silence.

She looked down and imagined the globe of her daughter’s head beneath all of that hair. She had to visualize her designs before she started. She would do curved cornrows leading to two ponytails in the front and curved cornrows leading to one ponytail in the back. (She hoped to God she could fit all the hair in one ponytail in the back, but truth be told she would probably have to do two or three). She’d do three or four double-strand twists in each ponytail. And she’d do one basket weave in the front, which was her signature.

She used the pointed end of the comb to make the first row. Again she dipped her finger in the oil and spread it along the part. Then she picked up the fine strands at the hairline and started braiding. On the television, a professor was talking about the nation’s appetite for violence against black men. The professor was a black man himself. He wore a vest and thick-framed glasses and he spoke like his words were fighting each other to escape his mouth. . “I have a son,” he said. “I have to tell him that he could be killed for no other reason than that he is black.” Lydia felt several emotions wash over her as she watched him talk. Sadness. Anger. But she also felt proud at how eloquently the professor described this tragedy. This must be hard for him, Lydia thought, telling his business to everybody watching t.v. As she watched, her fingers moved over and under, grasping and pulling at the hairs on the girl’s head.

Lydia glanced up from the sofa. “Hey, Rochelle. You finna leave?”

“Just about. I came to say goodbye.”

“Give me one minute,” Lydia said. She finished her first braid and then swung her leg over the top of the girl’s head and stood from the couch. “Where are your boys?”

“In the art room. You want to come say bye to them?”

Lydia and Rochelle walked out of the rec room and into the hallway. The posters on the wall informed them of the “house rules” and of local businesses that offered counseling on immigration rights and health services for women and kids. The biggest poster had fancy purple letters. Its title was Support & Empowerment Groups and underneath the title was a list of groups that the women who stayed in this place were encouraged to join. Next to this poster was a large painting of the former slave and abolitionist after whom the shelter was named.

“Are you sure your Ex is not going to be in town?” Lydia asked as they walked.

“Not according to his Facebook,” Rochelle said. “He arrived in Houston last night to visit his brother. I know he’s not going to turn right around and drive back home to Phoenix. That gives me some time. I only need about four hours to get everything out.” Rochelle’s eyes darted back and forth as she spoke.

At the end of the hall, they made a right turn into the art room. Inside, children were sitting at round tables where they drew or painted as part of the shelter’s mandatory expressive therapy for kids.

All four of Rochelle’s boys were standing in the corner, their backpacks piled next to them. Although the boys huddled together they were not talking to each other. They did not laugh or fight. One of the boys appeared to be talking to himself. He had a crooked smile on his lips and a faraway look in his eyes. Each of Rochelle’s boys seemed contained in this way, like their true selves were wrapped in plastic.

“Bye, babies,” Lydia said spreading her arms wide for a group hug. Of course, she knew these boys were nowhere near being babies. They ranged in age from ten to fifteen, and they were taller than their mother. The oldest one was the first to walk sheepishly toward her and then the others followed. None of them made eye contact with her.

“You sure have some handsome young men,” Lydia said intending this comment for the boys. They didn’t respond. “Take care of them, Rochelle. You know what’s going on out there,” Lydia said.

“Oh, I know. It’s crazy. I saw you watching the funeral back there.”

“Are you sure you have to travel right now?”

Rochelle nodded. “I need to get our stuff. We’ll be alright. I’ve got my map all highlighted and everything.” She pulled out a map that she unfolded and held up against the art room wall. Rochelle had highlighted and notated their entire drive from Seattle to Phoenix.

“So it’s sixteen hours from here to Bakersfield,” Rochelle began, “which is our longest leg of the trip. We’re going to stay overnight in Bakersfield. Then it’s two hours from Bakersfield to Los Angeles. That’s all on I-5.” She moved her finger along the route they would take down the Pacific coast into California’s inland empire. “We’ll stop in L.A. for a minute, and then we’ll drive five-and-a-half hours to Phoenix. It’s going to be a fun road trip,” Rochelle said, “like National Lampoon’s Vacation. Remember that movie, Lydia?”

“Never heard of it.”

Rochelle laughed in the screwy way that she had. She was just the right amount of crazy. “We’re going to Walley World, right boys?!” Rochelle laughed again. “I’ll call you, Lydia, as soon as we get back. I’ll let you know our new address here in Seattle.”

After they said their goodbyes, Lydia returned to the rec room by herself. Two other women had come in while she was gone. One was reading a book and the other one was sitting in a recliner drinking from a Starbucks cup. She nodded at the women then moved toward the couch. Her daughter was sprawled before it like a mess of noodles. Lydia stood there and stared at the girl. The girl stared back. Lydia wished there was one thing worth noticing about her daughter, something that would distinguish her—a nice nose, some dimples, brighter skin—but there was nothing. Lydia sat on the sofa and picked up her rat tail comb.

“Turn back to breaking news,” she said.

Her daughter picked up the remote and pointed it at the television with a limp wrist. An older man, identified as a mayor, appeared across the screen. He stood at a podium in front of a police station. Lydia made a second curved part at the top of her daughter’s head. She would give the girl a pretty cornrow design. She would moisturize the hair as she styled it and make it really shine. And as she braided, she would listen to this man talk.

“And you do. It’s gon’ take as long as it usually takes. Three or four hours, at least.”

Lydia started the second braid. The girl wiped a tear from her cheek.

“We’re forming a task force to study this incident,” the mayor said, “with the goal of ending any future incidents of brutality.” 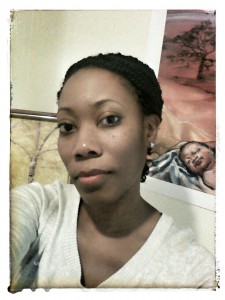 Renee Simms‘ stories and essays have appeared in Joyland, Full Grown People, Salon, North American Review, Hawai’i Review, and in the 2014 anthology All About Skin: Short Fiction by Women Writers of Color. She received a Notable Story mention in storySouth and her fiction has been supported by fellowships from Vermont Studio Center, PEN Center, Kimbilio, and VONA. She has an MFA from Arizona State University and a JD from Wayne State University. She teaches writing and African American Studies at University of Puget Sound in Tacoma, WA.