COLLEGE FEMINISMS: In the Hour of Consciousness: Three Poems by Kathryn Eichner – The Feminist Wire

COLLEGE FEMINISMS: In the Hour of Consciousness: Three Poems by Kathryn Eichner

in a stale lecture hall,

flooded with fluorescents too dim

for anything to grow on its own.

It’s not our fault.

We believed regardless of common sense—

regardless of the irony—

We were already rooted in our doomsday bunker.

along my poorly sun-lit windowsill

despite my apathy to transplant it

after finally bringing it home from the hospital

along with my father who came close to dying from colon cancer,

though really it wasn’t the cancer

that would have killed him.

The absence of sun

helped me to appreciate mornings not

I sip my loose-leaf tea

until it gets cold and I will remember I am not a
morning person.

My appreciation is still wedged between the drooping leaves and the dew,

the same dirge written everyday by the morning air.

The sun pretends to rise like the rest of us;

The sunless sky bleeds from the horizon

mocking our earthly investment in blood.

Virulent beams will force themselves west

until they flower in front of your grave.

is to be spared the image of this country burning;

I have dreams of flowers licking my tombstone.

I drown what’s left of them in white noise—

vaporize them with electric heat—

before the sun has its chance to burn up

what’s left of the night.

I was the meanest woman

I had known up until

I sat on the sofa and

watched the news, but all

I could focus on was the high-pitched

noise coming from the tube; it was

making me nauseous. Those pompous

of their path to nirvana funded and fueled

by dollars that hadn’t even been printed.

The skin tightened on my ribs

drinking in the kitchen window.

I was skilled at self-damnation.

I sat back down on the same sofa

and opened the bottle. I poured myself

a good-sized glass, though I didn’t even

It seems there is a lot to forget.

MUTE hovered and vibrated in the

right corner of the screen. The sterile blue

outside the opposite window.

I stepped out onto the deck because

I didn’t remember the last time I had

been outside. There was no point anymore.

Lights flickered from what

used to be the backyard. These were

an old citronella candle; I would have

poured it out, but mosquitos

I grazed my fingers over my chapped lips

to remind myself I still haven’t eaten

I think it was 9PM by the looks of

the traffic, even though the flow

is always the same

around here now, no matter

what time of day. The cool hue

poured out onto the lawn from

the refrigerator I must have

I wonder if any of the passing cars

knew that our house was still here,

or was the soft light extinguished

by the steady stream of

to pay my electric bill or buy groceries but not both.

that stirs the kitchen from the inside out.

The flow of the traffic is always the same around here now,

no matter what time of day.

I take a trip to the store, mostly to get away from watching the traffic.

My unfilled cart ticks past miles of over-branded cans and raw meat.

Her almost perfect body hesitates on the cement path,

I see her through the glass doors,

and she makes a beeline for the produce.

Across from her now, I am mesmerized by the even sway of her legs like fresh wheat,

and the authoritative clack of her high-heels on the laminate.

and I do the same. The golden hair above her kneecaps is exaggerated in the fluorescents

She thumbs a pock-marked avocado, and the muddy green skin apologizes

to her blushing fingers.

I ignore the tollbooth lanes of checkout lines, merge through the sliding doors,

and contemplate the dew on her cheekbones and the uneven cement.

As I climb the stairs, I hear

the refrigerator doors swing with the flow of traffic.

I must have left them open from just looking. 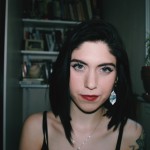 Kathryn Eichner is a senior at the University in Connecticut. She is double-majoring in Women’s, Gender, & Sexuality Studies and English with a concentration in Creative Writing. Her recent work has appeared in The Long River Review.