On Nicknaming Predators – The Feminist Wire 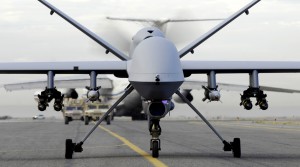 I have been asked by a number of people about naming drones.

“Do drone operators name their drones?”

“Do drone operators give their drones nicknames?”

“If you bought a drone, would you name it?”

“What would you name your drone?”

Multiple people have asked me these questions since the start of my project—my advisors, my peers, my friends—and I had not given the matter much thought until I was asked. How would I even answer whether or not drone operators name their drones? I do not know any drone operators.

The answer found me soon after. In an article published on The Intercept by Jeremy Scahill and Glenn Greenwald, the two speak with a Joint Special Operations Command (JSOC)[1] ex-drone operator named Brandon Bryant about the NSA’s role in the US drone program. Bryant explains how Predator and Reaper drones are often given nicknames, including “Lightning” and “Sky Raider,” and then clarifies that the “Sky Raider” is also referred to as “Sky Raper.”[2] He says it is “‘because it killed a lot of people.’ When operators were assigned to ‘Sky Raper,’…it meant that somebody was going to die.’”[3]

I have heard the term “rape” used as slang to imply that someone was going to put forth great effort to defeat or accomplish a task. I first think of the nickname in this context. By nicknaming a drone “Sky Raper,” operators—who are actors of the State—own the use of rape for domination and to defeat a target, while simultaneously participating in the normalization of rape as a larger systemic issue. The drone that takes this name is literally a weapon of war, operated by US persons in the War on Terror.

Nevertheless, we must keep in mind that rape is pervasive both within the US military and within US society, but also that sexual violence has been used by US persons in this war and as a tactic of power in prisons, such as Abu Ghraib. Not only are operators suggesting that it is appropriate to use rape as a weapon against individuals in a time of war, they are also making light of sexual violence more generally.

Based on a Department of Defense report[4] on sexual violence, Time wrote[5] that in fiscal year 2014 there were 5,983 reported sexual assaults within the US military, though only an estimated 25 percent of victims filed complaints. These numbers prove a serious issue. Further, each year there are roughly 293,000 victims of sexual assault in the United States, while only 32 percent of assaults are reported.[6] These numbers alone should alert you to a problem of sexual violence in this country. The sexual domination of women, men, and gender non-conforming individuals alike is a pervasive problem within the patriarchal structure of the US.

Sexual violence has been used as a tool of war for centuries, from Antiquity to the start of the colonial era to the War on Terror. It is a mechanism of asserting power and dominance over the body of a precarious Other. While sexual violence has historically been associated with fear of the hypersexualized black or brown male—a racial and sexual monster of the 18th and 19th centuries[7]—we must consider this same racialization and sexualization of brown-skinned men as part of the sexually aggressive white patriarchal response of the United States since 2001.

In fact, immediately following 9/11, posters depicted Osama bin Laden being anally penetrated by the Empire State Building with the caption, “The Empire Strikes Back… So you like skyscrapers, huh, bitch?”.[8] Cultural critics Jasbir Puar and Amit Rai explain how “the US state, having experienced castration and penetration of its capitalist masculinity, offers up narratives of emasculation as appropriate punishment for bin Laden, brown-skinned folks, and men in turbans.”[9] The link between this sexually violent response and the name “Sky Raper” is important to remember, especially when “Sky Raper” is used to describe a weaponized drone that kills a lot of brown people.

Puar and Rai attribute this sexually violent response to the 9/11 attacks to a constructed psyche of the terrorist as one of failed heterosexuality, thus prompting a response of aggressive heterosexual patriotism.[10] In other words, by describing the attacks on 9/11 as an unwanted penetration of an American capitalist masculinity—or a sexual violation—the US must respond with a militarized hypermasculinity.[11]

Puar explains then that the sentiments of US victimhood after the attacks were “attached to gendered, sexualized, and racial codings of [the body of the monster-terrorist as queer.]”[12] Within this narrative, the US must retaliate to the attack on its capitalist masculinity by emasculating the terrorist—whose failed psyche is essentially tied to queerness as sexual deviancy—and “turn him into a fag.”[13]

I want to make the existing gendered, sexualized and racial codings of brown skinned people clearer with the example of sexual violence against prisoners held at Abu Ghraib Prison. After the US invaded Iraq in 2003, Amnesty International published a report documenting abuses—including sexual violence such as rape and sodomy—by the US military at Abu Ghraib.[14] Photos were later widely disseminated displaying naked men piled on top of each other, or forced to perform sexual acts on one another in front of American military police.[15] These men were emasculated in the process of their sexual humiliation.

These actions of rape, sodomy, and forcing individuals to perform sexual acts on one another illustrate the use of sexual violence for patriarchal domination of other people. These abusive acts also serve to demonstrate exactly what Puar and Rai discuss as the othering and quarantining of subjects classified as “terrorists” and the queerness (as sexual deviancy) that is tied to the terrorist figure as a mechanism to weaken the terrorist subject.

To bring this back to the “Sky Raper,” consider the drone as operating as a tool for sexual abuse of brown skinned people within the institution of the Global War on Terror. The Predator or Reaper to which this nickname is given represents and can be physically characterized as the “white Western phallic power”[16] that Puar and Rai describe. The drone is a tool used by the US—with a distance between the operator and the target, which enforces the power of the West—to ultimately emasculate and sexually violate the quarantined (due to geographic distance) gendered, sexualized, and racialized terrorist-monster.

[15] You can read more specifically about these abuses in the essay “On Framing the Other,” page 62. 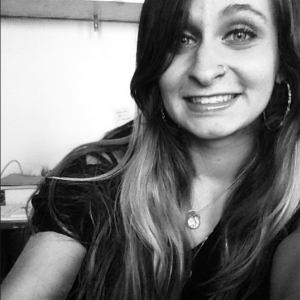 Erin Corbett is a recent graduate of Hampshire College. Her final thesis, titled “Drone Lyrics: US Terrorism and Digital Biopower” explores systems of State oppression in the wake of the Global War on Terror through the lenses of race, political, queer, and feminist theory. Her work has been published at The Nation and Feministing.

Related ItemsAbu GhraibDepartment of Defensedronerape and warsexual violenceUS Militarywar on terror
← Previous Story COLLEGE FEMINISMS: In the Hour of Consciousness: Three Poems by Kathryn Eichner
Next Story → COLLEGE FEMINISMS: Hillary Clinton for President? Why She’s Not the Woman We Need