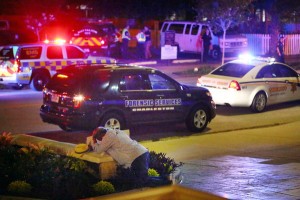 Today I mourn with the families and community of the historic Emanuel African Methodist Episcopal Church (AME) in Charleston, S.C. I mourn for the living and the dead. I mourn for Black life. But simultaneously, I rage. I rage against the executions, beatings, dispersals, and assassinations of Black people everywhere.

I am calling out the current manifestation of Black genocide, racial cleansing, and white terrorism happening in the U.S. And I resist the urge to name and/or frame ‎the terrorist murderer Dylann Storm Roof‬ as a lone actor, bad apple, or a good kid gone bad. No. He is a foot soldier of the evil racist regime, which kills unarmed and unsuspecting black boys while playing in the park, physically and sexually violates black girls while swimming in the pool (and here), and executes black teens and adults, male and female alike, while shopping in Walmart, driving without a taillight, hanging out with friends, jaywalking, and while unable to breathe (and here). Today we add studying the bible and praying to this list. 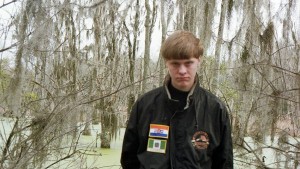 Last night, Roof, a 21 year-old white man, massacred nine Black people during Wednesday night bible study at Emanuel AME Church. While the racial spinning and whitesplaining and washing has already begun, Roof is not a kid. He is not crazy. He is a man. He was intentional. He was calculated. And what he did was not only evil but sin. At some point in time, wearing his apartheid era South African flag and the flag of Rhodesia, symbols of twisted white supremacy, Roof decided to walk into a historic Black Church, sit among the people who welcomed him, and slaughter them to death.

According to one survivor, he reloaded his gun five times and said, “I have to do it. You’re raping our women and taking over the country. You have to go.” So many questions abound. Apart from D.W. Griffiths 1915 racist propaganda film Birth of a Nation and its offspring of seedy news media outlets, where is Roof getting his information? And what makes him judge, jury and executioner? Are Black folk still dying in the name of white women’s honor in 2015? Last I checked, while police violate unarmed Black folk daily, most violence in this country is intra-racial. And more, six of the nine people Roof murdered were Black women. In an article titled, “The Charleston shooter killed mostly black women. This wasn’t about ‘rape’,” Rebecca Carroll writes,

There is something inconsistent with the Charleston shooter’s alleged evocation of the historical myth of black man as beast and rapist of white women, and the fact that he killed mostly black women. Did he only shoot black women because there were no more black men to kill? Because black women birth, care for and love black men? Or because he didn’t see black women as women at all, and, as something less than women (and certainly lesser than white women), felt us undeserving of the same valiance he conjured on behalf of the women he claim to be protecting?

The shooter allegedly used the salvation of white women’s bodies as a motivation for his acts, an old trope that was once used to justify the lynching of black men and the denial of rights to all black people. The idea that white women’s bodies represent that which is inviolable while black women’s are disposable hasn’t changed enough since it was first articulated by white men; but again, aimed at black men on Wednesday night, it was predominately black women who suffered by their invocation.

Roof’s masacre was not about rape. It was about his own hatred and fear. The second half of his words were likely the most honest, “You’re…taking over the country. You have to go.” Black folk “have to go” because white folk fear that they are losing power. What’s interesting about this is that for many Black folk, white supremacy seems not only alive and well but to be thriving. Since the Zimmerman trial white hatred for Black life has run amok without recompense. Unarmed black people are killed by police or white vigilantes [now less than] every 28 hours. So tell me, who is to be feared America??? Exactly who should fear for their life???

Roof walked into the Black Church and murdered nine innocent, unsuspecting and unarmed Black people. And again, and without apology or ambiguity, I say, he did not act alone. Every single witness who saw signs of evil and hatred in Roof but never spoke is guilty. Every person who chose or chooses to stand mute as American apartheid creeps upon us is guilty. Every media or institutional outlet that refuses to call a spade a spade and name these violences as white domestic terrorism against Black life is guilty. 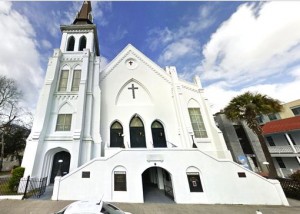 And that the mass murder happened at Emanuel AME is not happenstance. It stands within a long line of hate crimes specifically targeted at not only Black diasporic people but the historic Black Church. In case you’ve forgotten, there is the 16th Street Baptist Church, Birmingham, AL bombing that took the lives of  “4 little girls.” Addie Mae Collins, Cynthia Wesley, Carole Robertson and Carol Denise McNair, we speak your names.

Yet history tells us that violence against Black religious life goes at least as far back as the plantation — to hush/bush harbors, also known as the “invisible institution,” where ex-slaves secretly assembled in hopes of making sense of and providing hope for their lives. Contrary to popular belief, most enslaved didn’t accept the religious bigotry of plantation masters. Using a range of African and New World cultural sources, beliefs, movements, rhythms, mechanisms, thought and tools, they fashioned their own Christian faith tradition, what we know today as the historic Black Church.

By centering the liberative works of Christ over and against the oppressive moves and ideas of the white owning class, the ex-slaves constructed theologies of freedom, hope, love, self-affirmation and possibility. These meetings created free, safe and empowering socio-religious-cultural-political space. To this end, these spaces were also interpreted as dangerous. If the ex-slaves were caught meeting severe punishment would be meted out, to include whipping and death. One must pause to ask, what makes the idea of Black freedom, possibility, thriving and love not only terrifying but a crime? 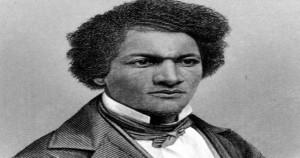 Emanuel AME is the bastion of such theologies. Denmark Vesey is a founding member. The recent massacre occurred a day after the anniversary of “what would have been the largest slave revolt in American history.” Vesey believed in a liberative theology, which demanded freedom for all people. Unfortunately, the details of the 1822 revolt were leaked and Vesey (along with several others) was captured on June 22 and hanged on July 2.

There were approximately 35 executions, to include Gullah Jack, an African-born conjurer, and Vesey’s chief lieutenant. Afterward the church was burned to the ground. “Worship services continued after the church was rebuilt until 1834, when all black churches were outlawed. The congregation continued the tradition of the African church by worshipping underground until 1865 when it was formally reorganized, and the name Emanuel was adopted, meaning ‘God with us’.” Again, what might historic and present day racial violences against and within Black churches tell us? Clearly Black folk aren’t safe, even in places of worship. But what is it about this space — this free, creative and liberative space — that gives rise to further white fear, anxiety, violence and hatred?

The historic Black Church is the only Black institution to exit slavery. That is not to say there weren’t other Black religious expressions (there were), or that those expressions didn’t survive (many did). But the historic Black Church, regardless of its struggles and contradictions, thrived as an institution within and beyond North American slavery and is the largest non-profit organization of black folk. I don’t have the answer/s to the questions raised here. I’m merely asking out loud. However, I’m asking not rhetorically. I’m really asking — because I believe we will all learn something by knowing. At minimum, we will better understand why Roof (and others) chose to target a historic Black Church, where people were praying and studying the bible, for a hate crime. And it’s not because he was attacking religious freedom or because the Christian Right is under attack. Rook targeted politically active, self and liberation loving Black folk who believed their God was on the side of justice. Truth lies somewhere in there.

To that end I want to reiterate: Roof’s actions were racist, hateful and calculated. He meant to kill. Or as he uttered, he had to kill. Black folk who love themselves enough to stand up for their rights and assert their innately given value, “have to go.” White supremacy demands it so. The question is who’s next?  What racial or gender group is next? We are mistaken if we think white supremacist tyranny ends with Black life, or that the Black living (or dead) will silently enable such ruthlessness. The #BlackLifeMatters movement is a testament to that. Denmark Vesey and Gullah Jack are testaments too. Movement folk stand on their shoulders as well as those of Sojourner Truth, Harriet Tubman, Frederick Douglass and many others. To be very clear, Black theologies of love and freedom aren’t new. Not all Black Christians or churches adhere to Black liberative theologies, but perhaps this is a wake up call. Neoliberalism and prosperity gospel will not save us.

Rev. Clementa Pinckney knew this all too well. He too was killed on Wednesday night. No. He was assassinated. Roof asked for Rev. Pinckney upon being welcomed into bible study. Then he assassinated him and eight others. Rev. Pinckney was the pastor of Emanuel AME. But he was also a Democratic state senator in South Carolina (since 2000) with deep religious and political ties to the Black community. That is, he preached on Sunday mornings and led bible study on Wednesday evenings. But he also worked the state senate and led local rallies after the murder of Walter Scott. In addition, he was pivotal to new body camera legislation in South Carolina and co-sponsored a bill recently signed into law by the governor. His assassination was no random act. The timing was not innocuous. Let it not be lost on any of us that it is both election season and open season on Black life. These things have always gone hand in hand.

Are we ready to call a spade a spade America? The Black genocide happening here can no longer be masked. It’s about time we tell the truth about it.