Beyond Saying Her Name – The Feminist Wire

Home / Activism / Beyond Saying Her Name

Beyond Saying Her Name 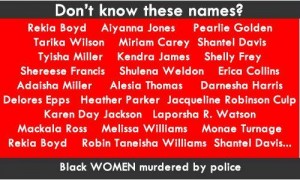 Today the African American Policy Forum, the Center for Intersectionality and Social Policy Studies at Columbia University and Andrea Ritchie, Soros Justice Fellow and expert on policing of women and LGBT people of color released #SayHerName: Toward a Gender Inclusive Analysis of State Violence, a document highlighting stories of Black women who have been killed by police and shining a light on gender and sexuality specific forms of police brutality often experienced by Black women such as sexual assault, police violence against pregnant and mothering women, and police abuse of lesbian, bisexual, transgender, gender nonconforming Black women.

The report’s release is timed to support mobilization for a National Day of Action on Black Women and Girls called by Black Youth Project 100, Ferguson Action, and #BlackLivesMatter on May 21st. It is intended to serve as a resource for the media, organizers, researchers, policy makers and other stakeholders to better understand and address Black women’s experiences of profiling and policing.

What follows is an introduction to the report by co-author Andrea J. Ritchie.

#Say Her Name draws, builds, and expands on the cases, themes and analysis of a body of work beginning with Anannya Bhatacharjee’s groundbreaking 2001 report Whose Safety? Women and the Violence of Law Enforcement and the Audre Lorde Project’s groundbreaking work and analysis of police violence against women and LGBT people of color, through the writings and organizing tools published by INCITE! over the past decade in The Color of Violence: The INCITE! Anthology and Law Enforcement Violence Against Women of Color and Trans People of Color: A Critical Intersection of Gender and State Violence, to the publication of Queer (In)Justice: The Criminalization of LGBT People in the United States in 2011 and Beth Richie’s Arrested Justice: Black Women, Violence, and America’s Prison Nation in 2012.

It is also informed by a long legacy of efforts to lift up Black women’s experiences of police and state violence dating from Harriet Jacobs’ (writing as Linda Brent) harrowing accounts of the abuses of enslaved African descended women by slave patrols, to Ida B. Wells’ documentation of lynchings of Black women along with Black men, to Angela Y. Davis’ calls for attention to physical and sexual violence against Black women by law enforcement agents from the Civil Rights movement to the present, to a report published in the mid 80s documenting police brutality against Black women in New York City described by Joy James. 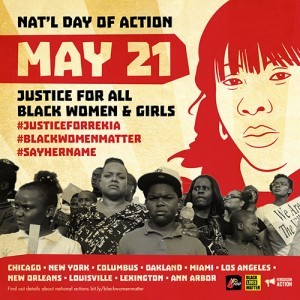 Over the past two decades this body of work has surfaced the experiences of Black women and women of color with racial profiling and police abuses, and identified contexts and trends in the nature and quality of the police interactions that have driven the mass incarceration of Black women and women of color. It has described the operation of controlling narratives theorized by Black feminist scholars such as Patricia Hill Collins in Black women’s encounters with police, and offered critical recommendations for ensuring that the names of Black women killed, brutalized, and abused by police never again go unsaid.

In conversations about racial profiling, we have continued to raise the reality that racial disparities in stops, searches and arrests are the same for women as they are for men, and that racial profiling of women of color, including queer and transgender women of color, takes gender specific and sexuality-specific forms, based on stereotypes rooted in slavery and colonialism, in the context of the war on drugs, the policing of motherhood, and the enforcement of prostitution and trafficking laws.

We have emphasized that Black women and women of color’s experiences of racial profiling and police brutality are not aberrations or distractions from the central conversation, which features cisgender, heterosexual Black men and men of color as the prime protagonists, but rather are central to our understanding of the impacts of policing on our communities, and to the solutions we pursue. 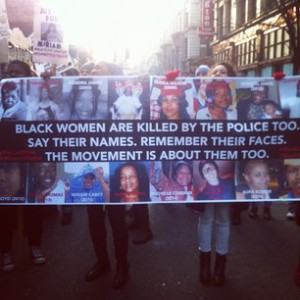 And we have insisted that Black women and women of color can no longer be expected to lead movements challenging police brutality but be silent about our experiences, or be boxed into a frame that only allows us to be grieving mothers, sisters, partners of men of color or collateral damage in attacks on them. We are saying, once and for all, that we are, and forever have been, targets of state violence in our own right, and our experiences must inform the demands of the marches we organize and the movements we lead.

Bringing the experiences of Black women to the center of conversations around profiling and policing reveals that gender and sexuality represent central axes around which policing takes place, in conjunction with – and in service of, race and poverty-based policing. In other words, racialized gender-based violence by law enforcement officers is fundamental to the institution of policing itself.

The present moment offers opportunities to go beyond saying that police brutality happens to Black women too and naming the specific ways racialized state violence is visited upon us. It calls on us to engage in organizing and advocacy that is both gender inclusive and gender specific. What does it change to bring these voices and experiences from the margin to the center? How does it shape our actions, our demands, our visions for the future?

Recommendations for addressing discriminatory policing of women of color made to the President’s Task Force on 21st Century Policing by over 75 organizations and individuals – from organizers to academics to lawyers to anti-violence advocates – represent the beginnings of an agenda for policy reform rooted in the realities of Black women’s interactions with police and specific to our experiences. The Task Force’s adoption of several of key recommendations in its final report released earlier this week has created opportunities to begin the process of more systematically documenting Black women’s experiences of policing, preventing the specific forms of discriminatory policing they endure, and offering meaningful remedies that address intersectional experiences of police profiling, discrimination and abuse more holistically. 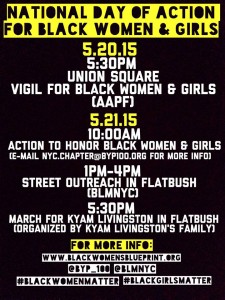 The present moment also offers opportunities to go beyond data collection, policy reform and systemic remedies to ask ourselves what Black women’s experiences of policing mean for the solutions to violence we envision or pursue – whether we are talking about domestic violence, sexual assault, or trafficking in persons. Does reliance on police to investigate and address violence ultimately hold the promise of increased safety for Black women given the ways in which the criminal legal system is constructed around policing of racialized notions of gender?

It also begs the question of how our communities must be transformed in order to ensure that the experiences, voices, and visions of Black women and women of color – queer and not queer, trans and not trans – are inextricably interwoven into our analysis of state violence and of structural racism. That question is the one we now hold, and which points to the road ahead. Only then will we be able to truly ensure individual and collective safety and justice for everyone in our communities. 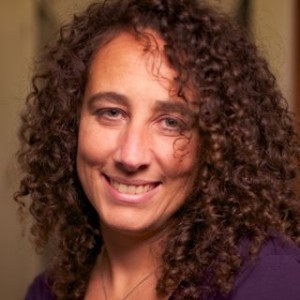 Andrea J. Ritchie is a Black lesbian police misconduct attorney and organizer who has engaged in extensive research, writing, litigation, organizing and advocacy on profiling, policing, and physical and sexual violence by law enforcement agents against women, girls and lesbian, gay, bisexual and transgender (LGBT) people of color in over the past two decades. She the co-author with Joey Mogul and Kay Whitlock, of Queer (In)Justice: The Criminalization of LGBT People in the United States. Currently, she is a Soros Justice Fellow whose work focuses on profiling and policing of women of color. In January 2014, Andrea was The Feminist Wire’s featured Feminist We Love during Tanisha C. Ford and Hakima Abbas’ co-cureated and co-edited Mass Incarceration and the Prison-Industrial Complex in honor of and featuring Mumia Abu-Jamal forum. You can follow Andrea on twitter at @dreanyc123.