Spent more time with mommy than the other girls at school.

Older cousin says, “I’ll show you mine if you show me yours.”

A seemingly innocent “game” turns into something more.

Years go by.  Are her memories real?  They’re only nightmares.

Hot summer day at the pool with your best friend.

Dog can’t stand the heat so he turns on the little girl.

Twenty percent of each lip gone.

She hides behind a hospital mask.

Can’t bear to look at her mutilated reflection.

She must not draw attention to her mouth…Don’t want to offend anyone.

Lexapro and Vyvanse tell most people they have a problem.

They tell her she is the problem.

She can’t relate to boys or have real conversations with them.

So she must communicate in the only way she knows how:

Sex, lots of sex… all kinds of sex, all sorts of partners.

One day she gets sick—after three false negatives, she gets a positive.

She thought she was better. Why isn’t she better?

After all that therapy.

She smiles, even though inside, sometimes, she wants to die.

Dyes hair dark, can’t stop obsessing over the fat on her thighs.

Tries to embrace her curves. Tells herself guys like girls with a fat ass, too.

Police harass her friend.  She stands up. They make an example out of her.

Mom tells girl Dad says not to say anything.

Don’t want to stir up the family.

Gets a little drunk at a bar.  A bouncer takes advantage of her in a back room closet.

This time she doesn’t even bother telling anyone.

Meets boy.  She calls it love, even though she knows deep down she’s just lonely.

Turns out boy is in a serious relationship with alcohol.  She is the third wheel.

How long will I remain silent?

What will it take to speak out?

I may have been silent and silenced, but NO MORE.

Silence is golden. NO MORE.
You will hear my voice. I apologize NO MORE.

Won’t apologize, not even for the occasional high-pitched stammer that you might recognize as the voice of the little girl that still traps herself inside of me. NO MORE.

Tells me she finds comfort resting in the resilience of my soul. I tell her, baby, you’ll be okay it’s time to part ways—

Dependent on me NO MORE.

I will never be voiceless again. 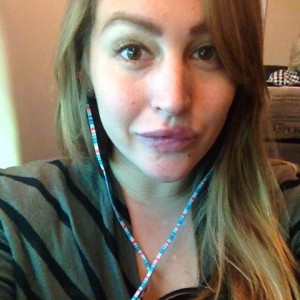 Katie Wayhart is a feminist, activist, friend, sister, daughter, survivor, and recent college graduate. Her writing encourages the empowerment of feminist and differently abled bodies with a focus on healing and the power of community.

Related ItemsActivismBlack Feminismbody politicsFamilyfeminismGenderHealthPatriarchyPoetryrapesexismsexual violenceviolence against womenWritingYouth
← Previous Story Hello vs. Holla? A Letter to the Hollaback Folks
Next Story → The Religion of My Rape