The Limits of Speaking on Catastrophe: Confessions of a Palestinian Teacher – The Feminist Wire

Home / Ethnicity / The Limits of Speaking on Catastrophe: Confessions of a Palestinian Teacher

The Limits of Speaking on Catastrophe: Confessions of a Palestinian Teacher

I am a Professor of English at Guilford College.

I am Chair of the English Department.

I am a faculty member in the Women’s, Gender, and Sexuality Studies Program.

I am also a Palestinian.

More specifically, I am from Arab Al-Sawahreh.

My tribe is so big that its name, The Sawahreh Arabs, appears as a location on some maps of Palestine (and there are many of this relatively small country). We live on Jabal Al-Mukabber, one of the Mounts of Jerusalem – “the mount of he who calls out the greatness of god.”

Now, a wall runs through it.

One part of my tribe has been divided from the other. Sometimes the same family is separated from itself.

From the house where I grew up in Amman, Jordan to Jabal Al-Mukabber in Palestine, it takes 45 minutes. 45 minutes – less than it would take us right now to get to Raleigh, or Durham, or Chapel Hill.

She died of cancer in a Jordanian hospital, having never returned.

My uncle was a Fida’i, a Palestinian Freedom Fighter. Exiled out of Jordan after Black September and unable to go back to Palestine, he loitered in a large waiting room called the world – sometimes Pakistan, sometimes Saudi – until King Hussein finally “forgave” the Feda’yeen.

21 days ago, my relative Mohammed was killed in a hail of bullets in Jerusalem. The Israelis say he was going to ram his van into a busload of Jewish settlers; his family says he was just driving by and a spooked settler shot him.

So what do I say about Gaza on this small campus in Greensboro, North Carolina, 6,000 miles from Palestine?

At least, we do not have Anna Akhmatova’s problem.

Anna Akhmatova was a Russian poet whose husband had been killed and son imprisoned by Stalin’s regime. Terrified of causing more harm to her son, but determined to live out the role of the poet as witness and as memory, she wrote a poem entitled Requiem. Here are some of the first lines of that poem:

In the terrible years of the Yezhov terror, I spent seventeen months waiting in line outside the prison in Leningrad. One day somebody in the crowd identified me… and asked me in a whisper… “Can you describe this?” And I said: “I can.” Then something like a tormented smile passed over what had once been her face.

Still afraid her poem would be discovered and her son punished even further, Akhmatova burned all of her poems, including Requiem, but not before she had her friends commit them to memory. There was no other way to preserve this witness. One of the friends remembers “going out late at night into the empty streets repeating a poem to herself over and over again, terrified she would forget a word or get something wrong.”

But we do not have Akhmatova’s problem. We are all witness. The images of Gaza bombard us.

A friend of mine shows me on her iPhone happy pictures of her visit to Ramallah, Palestine, this summer, her kids playing in the gardens of grandparents. Her thumb slides softly over the screen, and every once in a while, interspersed among the images of her smiling children, a mutilated corpse of a Palestinian child appears – images, no doubt, downloaded to her gallery through Facebook or What’s Up – thousands upon thousands of “likes” and “shares” and “posts.” Her thumb passes lightly over them; we don’t say a word about these images.

We are witness to so much. And not just in Gaza – in Iraq and Syria and Ferguson.

So what can I say about Gaza?

As an Arab woman, raised Muslim, I have often had to choose between competing selves. Sometimes, even small daily moments call for putting my Arabness ahead of my womanhood, or my womanhood before my Arabness, or my Muslim identity ahead of both.

Always, however, I am a teacher. Teaching is my passion. It is my vocation. It is the place where my divided selves are salved – where I can reconcile being an Arab and being a woman. My nationalist self comes to terms with my feminist self because I can intellectualize this division and make it a teachable moment for my students.

So what can I say about Gaza?

I have nothing for you but my confession:

Today, it’s hard for me to be a teacher. Today, I am a divided being. My teaching self is at odds with my Palestinian self. This is very problematic, even to me: I dwell in the life of the mind; intellect and theory are my daily bread.  But I have seen dark glimpses of this and always tried to pretend it away. On the rare days I teach Palestinian literature, a deep nausea and melancholy settle in my body and soul in a way that is all but debilitating.

This is not a teaching moment for me, except that it teaches me that perhaps there are limits to intellectualizing catastrophe. In the face of death, in the face of rivers of blood, in the face of hungry children and lifeless hospitals, sometimes horrified silence and righteous anger are what are called for.

And here, too, is my confession:

When I envisioned Guilford’s response to “Protective Edge,” it did not look like this discussion panel. I envisioned it like a clear line drawn in the sand, like that story a former professor of mine at Drew University told me about the Quaker board of Trustees of Bryn Mawr, who after the bombing of Cambodia, shut down the College and cancelled classes and told the students to go out in the world and work for peace.

And here, too, is my confession:

At this moment, I don’t want to teach about Palestine so that others may take a stand; I want to take a stand that teaches others.

In planning this panel, as we struggled to create a safe space for our students, all I could think about was that large, unsafe, deadly prison of besieged people. What blue shirted person(1) does a Palestinian child seek when they are not feeling safe? The UN’s?

The missiles find them there as well.

As we struggled to create possibilities for dialogue, opportunities for learning, potentialities for peace, all I could think about were the little strewn bodies of impossibility, the never would be’s, the finality of death.

As we struggled to honor our students, all I could think about were those little bodies that drew their first breath in Casts of Lead, learned to read in the shadows of Pillars of Clouds, and were finally silenced by a Brother’s Keeper or the sharp blade of a Protective Edge.(2)

Who keeps and protects these children now?

On a daily basis, I walk into a classroom with very clear pedagogical goals in mind; chief among them is that my students should leave with more questions than answers.

So here, too, is my confession:

Today I want you to leave with more answers than questions.

Today I have to choose between being a Palestinian and a teacher. So I choose to be a Palestinian, but I hope you can see that by taking a clear stand, I can be both. Because I hope that intellect is not diametrically opposed to activism. That it need not distract us from action, nor be a soothing substitute for action. I hope we don’t feel better about ourselves that we have come together on this hallowed ground, where Quakers have taken a clear stand against great inequities and risked great peril to their lives and property,(3) and talked things through.

And even if this choice does mean that I have failed as a teacher – in my bones, I can live with myself as a Palestinian.

The original version of this essay was delivered as a talk on the panel “Perspectives on Gaza: Israel, Palestine and the Ghosts of Catastrophe” held on the campus of Guilford College in Greensboro, North Carolina on August 28, 2014.

1. Audience members were encouraged to seek out Guilford College’s Conflict Resolution Resource Center volunteers in the blue shirts if they needed a private and safe space to express their feelings.

2. The names of various Israeli offensives against Palestinians.

3. The woods of what is now Guilford College were part of The Underground Railroad. 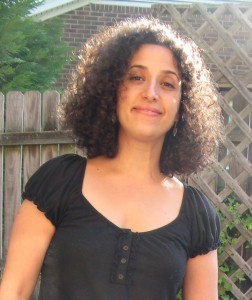 Diya Abdo is a first-generation Palestinian born and raised in Jordan. She loves teaching and writing about the work of Arab women writers and Arab and Islamic feminists. She is an Associate Professor of English and current Chair of the English Department at Guilford College in Greensboro, North Carolina.