“I Am Because We Are: Ferguson, Family & Freedom” #FergusonFridays – The Feminist Wire

Home / Activism / “I Am Because We Are: Ferguson, Family & Freedom” #FergusonFridays

“I Am Because We Are: Ferguson, Family & Freedom” #FergusonFridays 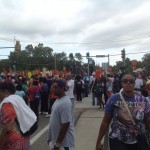 “Where one is oppressed, none are free.”

So said several of the signs I saw in Ferguson, Missouri, nearly 3-weeks ago today.

My trip to Ferguson, both a member of the Feminist Wire team and as a Black Life Matters rider, represents many things for me: activist commitments, civic participation in community, and Black feminist solidarity.  While there are multiple entry points for making sense of my experience in Ferguson, the aspect that is most salient for me lies within the embodied spiritual- or the internal space/realm of feeling (sensory emotions) in which purposeful engagement meets political commitment. 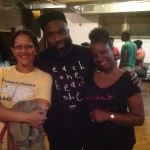 The fact that I had chosen to mobilize in conjunction with others who made the same choice- some folks I’ve known and worked with before- but the majority with whom my only known connection (initially) would be this work: the work of Ferguson; Black Lives Matter. One of the most crucial things to come from my time there is a deeper understanding of community solidarity and collective action. I saw these principles reflected in the planning process, as folks took a “by any means necessary approach” to raise funds, reaching for one another in social media, using their networks, and otherwise reaching thousands of miles across the nation to be in touch with the community of Ferguson and folks on the ground. 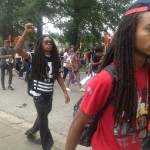 What I witnessed was a willingness from all involved parties (residents in the St. Louis area, Ferguson community members, and supporters from around the country) to bridge a myriad of differences- in age, experience, talent, sexual identification, religious beliefs, and more. Professor Tricia Rose, during the Ferguson Teach-In at Brown University, highlighted the dynamic power of ‘internal diversity’ bound together by shared/communal outrage. Witnessing and participating in this space brought home for me the beauty and necessity of inclusive solidarity, and the sheer power of what this practice can look and feel like when choose for ourselves together.

Spotlighting the Ferguson coalition, Tricia Rose speaks to the broader historical context, referring to it as a “tipping point.”  Part and parcel to this country’s history of racism and emblematic of persistent institutional racism in the post civil rights era and purportedly “post race” America, Ferguson signifies a “tipping point” in terms of intra-racial diversity and intersectional leadership and solidarity. Not only did folks come from across the nation, but folks came from different walks of life (hence the important role of social media campaigns, networking and grassroots organizing) and specific personal locations. Young, queer leadership from New York and from the west coast joined forces with established community leaders, such as Reverend Starsky Wilson. Youth and elders- Black and white from Ferguson and other nearby communities joined with one another and with Black Life Matters riders.

The inclusivity of the movement- yes, it is (and must be) a movement not merely a moment, is remarkable from a historic standpoint. The riders from around the country were young, queer, trans, and all gender iterations.

Some were church folk, and some were not. There were students, professors, community members, other professionals, artists, healers, musicians, journalists and laypeople.  This is what solidarity at the tipping point looks like.  No longer are the Bayard Rustins and Claudette Colvins of the movement relegated to silent or closeted positions for the sake respectability; aside from a refusal to be marginalized, these folks are leaders. Their creativity, strategic organizing, and ability to delegate and empower (instead of micro-managing and control freaking) others across skill set, passion, and expressed local needs was unlike anything I’ve witnessed prior.

For me, serving with my people- from the academy, from the streets of Jersey where I grew up, from my fields- Women’s Studies and Education, from my welfare class background- and above all, serving with two of my former students who are residents of St Louis: Waylon MacDonald, an aspiring organizer who has ties to the community through non-profit work, and Elizabeth Vega, whose community connections come via arts-based therapy and healing work; both are active members in the Organization for Black Struggle. Their insight and their stories guided me, while I was on the ground. They introduced to me a variety of local folks who were kind enough to share their stories, they marched beside me at the protest; Elizabeth brought me to a community theater training aimed at helping residents of Ferguson use theater as outlet for their experiences- as a way to address trauma and begin healing. 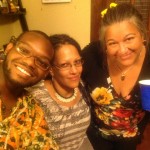 Waylon attended Black Lives Matter events (organizing workshops/instructional sessions) at the church with me, and drove us (myself and my TFW colleagues) around the city. Marching, protesting, and demonstrating with my former students filled me with pride. Mentorship and teaching matter…those connections can be deeply powerful and transformative in ways I had not yet experienced firsthand- yet another gift that Ferguson gave me while I served.

The privilege of being with (and working alongside) a range of folks in this new intersectional “Black Life Matters” movement was the lifeblood of my journey to Ferguson. The “tipping point” turned movement requires continued diligence on behalf of Mike Brown and vigilant justice-seeking with and on behalf of the residents in his community. It doesn’t matter if we live there or are from there: we are kin- everyone who loves justice and believes in the value and significance of Black life is invited to be a part. And it is truly a “come as you are” situation where folks work together, listen, love on each other, and combine personal knowledge, resources and passion to mobilize in dynamic and innovative ways.

Perpetually generating and replenishing this movement means a continued commitment to inclusive solidarity with women and LGBTQ folks.  It also means exhibiting a willingness to support youth leadership. A sustainable movement means organizing and recruiting, because in the words of indigenous feminist scholar, Andrea Smith, “if you go to power without a base, your demand becomes a request.”

It means truth-telling about white supremacy and police violence in communities of color; it means drawing the larger historical connections for folks, so they can see themselves as part of a legacy of struggle and change.

Borrowing from Outkast, it means reaching the nation from your corner– in terms of local, grassroots organizing where you reside. As evident, here in Boone, North Carolina, I participated in the Watauga NAACP Vigil and demonstration for Mike Brown. I’ve also worked with student organizations, staff and other faculty at Appalachian State University to speak on roundtables, march locally and to demonstrate on campus. Doing this work with students, colleagues, children- including my own, and elders has been a gift. And even in our remote location of Boone, we know that it matters- because Black Life everywhere matters. 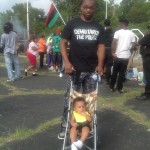 In addition to bringing the work home, the new coalition of activist-organizers who were in Ferguson are maintaining our intersectional community and harnessing our collective energy virtually, through ongoing social media efforts such as  #FergusonFridays, #BlackLivesMatter on Twitter, and on Instagram, and through numerous other outlets. Many of us will return to Ferguson, as the folks there have requested a massive outpouring of support for protests and demonstrations in mid-October: get in where you fit in, just be there and be in solidarity with…be in fellowship with….be in community with…be on the right side of history with.

We all have a day job, but our participation in Black Lives Matter and in demanding justice for Mike Brown and others, we step into the fullness of are humanity, our community and ourselves. We’re the ones we’ve been waiting for: female, gay, trans, young, old, poor, religious- and we have each other.