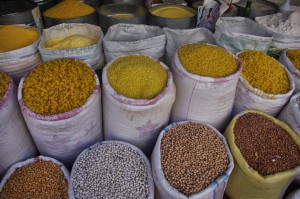 I traveled to Fez and Casablanca, Morocco, earlier this month to dialogue with Islamic Feminists there and to see, feel, and stretch myself to and in Northern Africa. What follows are a few thoughts about the complexity of traveling and being from the United States today while also being committed to building coalitions for peace, especially among feminists. And today means now, this urgent moment after the Israeli bombardment of Gaza.

Nothing I say here is universally true. Some of it may be more momentary than lasting. It would be easy to disagree or pose a differing viewpoint. But, yet, I think it is worthwhile to risk myself to maybe find newly honest dialogue.

Some of my musings are cryptic and partial, but I share them if they might help us to think about the urgency of now. Though there is nothing new in saying the U.S. is imperial, racist, misogynist, and militarist, we may be in a newer, more vengeful phase of it, with unknown consequences for everyone.

Both Fez and Casablanca are in part replicas of walled-in cities. The medina bespeaks a life built at the ready for defense against new conquest. Unsettled histories of tribal conquering, militarism, and colonialism defined the early architectures of these cities and much of it remains. The tribal and then colonial past by Portugal and then France still lines the contours of everyday life. 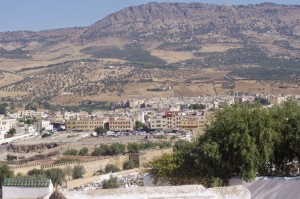 While walking in the streets of Fez, I was conscious of being Caucasian and therefore of the West. Most often I was asked if I was Australian. There were no North Americans in easy view for me to see. As from the west, and then “American,” I symbolize the wars in Iraq, Afghanistan, and Syria, and in Morocco the wars seem closer and they are. Unsuccessful revolutions in Tunisia and Egypt, and the continuing blood bath in Syria, are on people’s minds and bespeak the callousness of war spoils: displacement, refugees, death.

These countries suffer U.S. imperial projects in ways that we do not at home. There is no daily presence of endless displacement here in the U.S. Food and electricity is available for most, and bombs are not heard or seen. But northern Africa suffers our doings more closely and worries about them more. Some people I spoke with think their king is figuring out ways to avoid an Egypt, while others remain skeptical.  Drivers of petite red taxis are at the ready to peg us for a visit to the old synagogue and graveyard. As soon as it known I am from the U.S., it is assumed I am Zionist. The actual “being a Jew” is not the identity here. I wonder whether U.S. Christians get this—which they too represent, the travesty of Zionist politics. This is the new political identification and conflation—that the U.S. and Zionism are one. The Israeli destruction of Gaza exposed this more clearly than ever.

While chatting, walking, and eating in Fez it seems like such a homosocial society across the genders. There is open hugging and kissing of men with men; women with women. They seem totally affectionate with each other. There is physicality across the identities of sex and gender in public venues. It is not clear how this covers over misogynist privileging of male life or how its sets different contours of it. There are few young women out and about. Men dominate in numbers in public spaces.  And the cafes are almost all filled with males. But women are hustling about doing the work they do in every country. 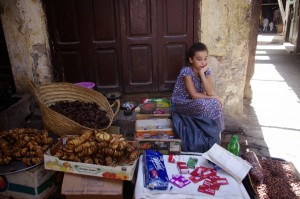 Men dote on their young daughters in public. So many of them are incredibly loving and affectionate, and I wonder when and why and how this changes to set the patriarchal markers that limits women’s lives in both public and private spaces. I assume domestic violence exists behind closed doors, just like at home and everywhere. I wonder about the similarities, the universalisms that are specifically written in Casablanca.

I see more families out and about than in the States. Intergenerational groups fill the streets of Fez on Friday evening near the medina. Many people have cell phones but are speaking on them, instead talking with one another. Restaurant tables are set for groups of six or more; I hardly see a setting for two that is so much more ordinary back home.

The petite red cabs pick you up for short fares. It does not matter if others are already in the cab. They move over and we share the seat.

The mint tea became a ritual for Richard, my spouse, and me. We would slow ourselves down and sip it together leisurely and muse and wander. We go to buy some of the tea for friends back home and only see Chinese-made tea. The salesperson laughs and finds us some made in Morocco. But China is all over the economy, as it is here. 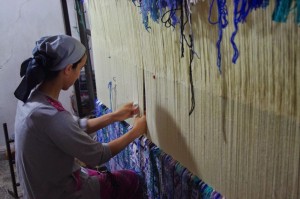 I see every kind of dress and panoply of head coverings and scarves for women and just a very few niqabs. As usual, most men are dressed in western garb. All the Muslim fashion and variety of dress seems more freeing than constraining. Most of the women I spoke with see themselves as believing and as feminist. And they see Morocco as engaging in the long slow struggle of progressive change.

It was surprising to see Richard’s white hair as so much of a marker as we walked the streets of Casablanca. Most older Moroccan men, at least in the cities we were in, dye their hair. Richard’s head of white hair marked us as different. Maybe my mix of blonde/white/grey also did.

We walked the cities to get to know them. The streets in Casablanca are rutted and broken even in the rich neighborhoods. Rich and I wondered why these fancy neighborhoods did not have fancier streets. The disrepair reminded me of streets in the Bronx. And we wondered what actually defines/makes a country poor, especially when it has many rich people in it. I am still wondering now that I am back home. 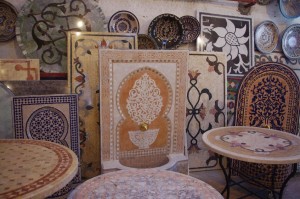 We are told that you are supposed to bargain in the medina when you are buying something. The vendor will give you a high price, similar to a U.S. price and you push for less. Neither of us wanted to do this. After all, why should the price be less? After seeing the workers with their exposed bodies in the tannery vats filled with chemicals for softening the leather for hats, shoes, and bags, we wanted to buy nothing. I just wanted to give my money away. And I wanted to not be seen as a rich westerner.

Computers are down at the Casablanca airport for our return creating a slow chaos of meandering lines going nowhere. Then, the entire system crashes. I realize it is very possible we will not leave today. But then the computers are back online and we start to move and our passports are checked and stamped. We leave, late, but we are finally on our way home.

On the return, our plane was filled with 75 percent Sub-Saharan Africans, 23 percent Moroccans or North Africans, and three whites, including us, from the United States. But at customs, so many of the Black Africans come into the U.S. citizen line. I stood on the line thinking that you can tell nothing or almost nothing by looking at any of us. U.S. citizens come in all colors, but the symbol is still white.  And everything depends on what people think they see.

I am unsettled and wondering in the best way. It is why we travel.

I carried our U.S. wars around with me in North Africa so I am not sure how much anyone can extrapolate from my feelings about the world just now. But I cannot help but think that feeling the wars up closer is good even if heartbreaking. And it felt important to be a pro-Palestinian feminist from the U.S. in Morocco to open dialogues that are too closed.

I was and am devastated to return home to the smugness of U.S. superiority and exceptionalism, as Obama promises the world that he will smash ISIS. The streets of Fez and Casablanca felt challenged but vital in the chaos and turmoil of the surrounding world. Coming home, it feels as though we are stifled, too removed from the mess of the world, and simply repeating vengefulness. I offer my snippets of thought as an anti-imperial feminist looking for alternatives to punishing “Others” and instead building coalitions towards a just peace.

All photographs provided by the author 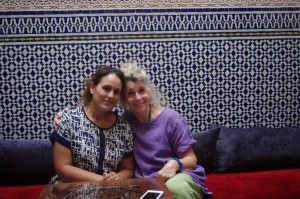 Related ItemsCasablancaFezGazaimperialismIsraelMoroccoPalestineTravel
← Previous Story “I Am Because We Are: Ferguson, Family & Freedom” #FergusonFridays
Next Story → What My Mother Taught Me: Loving Self