When I asked Hawa and Luam who they were, Hawa said: “I’m a storyteller and organizer. My family moved from Somalia and I have grown up in Canada since I was young. Somalia has a rich tradition of oral poetry, entire histories are passed from elder to child in the form of rhythmic storytelling. Hooyo (my mother) told me and my five other siblings stories and Somali folk tales as often as we were fed. The experiences of displacement, home, and ancestry are what guide my storytelling.” and Luam said: “As a child of an Eritrean woman freedom fighter, I grew up between Ethiopia, Eritrea and various places in Europe and North America. Stories of resistance, protection, intimacy and movement have raised me and continue to guide me. Curation as a practice of remembering and holding space is something that I have begun to immerse myself in. Our stories need to be told.”  Together, they are NSOROMMA. 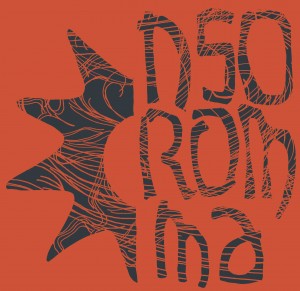 NSOROMMA started as an idea in a casual conversation over a year ago about things Hawa and Luam would love to be working on: they both had a desire to curate and to be a part of conversations about creating archival strategies in Black communities. But their story goes back much further to when they met seven years ago while they were both doing organizing work with youth. Together they created arts based curriculum for programming with Black youth and delivered this programming in Uganda, Tanzania and Canada.  They went their separate ways but stayed in touch as Black women with similar interests and visions.  Their separate paths had kept them interested in storytelling, the self-determination of African communities, and movement building.  The combination of art and resistance has always drawn them both and acted as a site for collaboration between them.  About a year ago, though both now in different fields of work and in different geographical locations, they started talking about working together again and NSOROMMA was born.

“NSOROMMA is part of a Black Arts Movement that cultivates creative action and innovation in Black communities. Through the incubation of Black artists’ works, NSOROMMA ignites responsive dialogue and supports Black art, thoughts and movements. NSOROMMA maps the currents of Black peoples to incite dynamic arts processes that shape global consciousness.”  The NSOROMMA blog is an online curatorial space of global Black arts and resistance.  One of the current projects of NSOROMMA is guest editing a special issue of the Canadian Centre for Policy Alternative journal on ‘Black Radical Tradition, Art and Black communities in Canada’.   They are also in the final stages of producing a short experimental film by Shimby, a diasporic Ethiopian filmmaker. The experimental short is set to the track Black Love by Gabriel Teodros featuring Sarah MK. The film will be released at the end of this month.

In addition to working together to build NSOROMMA, Hawa and Luam both continue to create and write. You can read some of Hawa’s writing here and Luam’s here and here.  You can follow NSOROMMA @NsorommaGlobal.

TFW: Tell us about the inspiration and need to set up NSOROMMA, as a curatorial space for Black arts and consciousness.

Hawa and Luam: In 1986, June Jordan said: “I still do not recognize a necessary conflict between the sonnet and the bow and arrow, I do not accept that immersion into our collective quest for things beautiful will [hinder] our own ability to honor the right of all human beings to survive.” 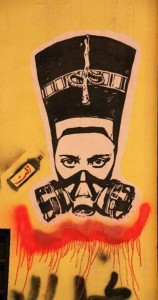 When we created NSOROMMA it was out of a desire to imagine Black communities connecting beyond constructed borders. In order to begin doing this we realized that we needed to respond not react, to transform not replicate, we needed to envision Blackness outside of the constraints of the margins. With this in mind, we devised an operational strategy, now in its (very) early stages of implementation, to place Black consciousness in a geographical, historical and political landscape. Archiving art for the purpose of inciting dialogue and creation.

NSOROMMA’s intended purpose is to inspire ourselves and our communities through the creativity and innovation of Black arts. As a curatorial space NSOROMMA brings together art, community, and Black consciousness to examine not only the state of the world and the impact on Black communities but to also asks critical questions: What is the relationship between archiving strategies and building community capacity? How can artistic practices act as sites where the seeds of revolutionary thought and action grow? How does art and artistic intervention create contested spaces of ambivalence, between aesthetic production and politically contentious creativity?

Our mandate is to forefront works by Black artists that are concerned with a decolonial aesthetic, liberation and freedom in order to politicize art as a site for experimentation and movement building.

TFW: How can art tell a Black and feminist story? 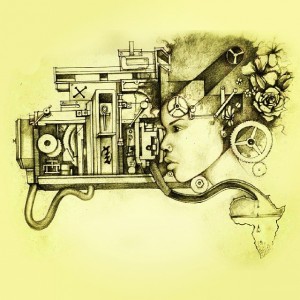 Cross Section of the Afro-Puff by Komi Olafimihan

Hawa and Luam: It is the aim of white supremacy to reduce Blackness, to create a single narrative in which the Black subject is one dimensional, criminal and unwanted for anything other than exploitation. Oftentimes, in an attempt to respond to white supremacist frameworks with a counter narrative we in the Black community opt to forward a Black subjectivity that defies notions of Black criminality but still does not sufficiently challenge heteronormativity or patriarchy. In doing this multiple Black subjectivities, including but not limited to, queer and feminist positionalities are further marginalized. There exists many Black feminist stories, Black queer feminist stories. Art is a medium in which realities are contested and shaped. We founded an arts based organization because we wanted to contest the narrow ways in which stories are created and told about Black subjectivities. We believe that the deliberate naming and creation of spaces that not only allow for multiple stories to flourish from them and cannot exist without them are critical for the growth of Black freedom movements.

NSOROMMA was born from that need, the need to create intentional space for art cultivation, creation and curation for Black communities at the intersections of, among other things, queerness and gender. The marginalization and exclusion of Black women and queer peoples matters because cultural production is as much a site for contestation the way for instance political or social fields are. Also, cultural production sits within, informs, affects and shapes political, personal, social, and political spaces. Black women and queer peoples are affected by all of these spaces, inform all of these spaces, exist in all of these places, and as such should definitely have, at minimum, their cultural contributions highlighted.

TFW: The Black Power movement had a very recognizable resistance aesthetic globally.  With the recent murders of Mike Brown and Trayvon Martin in the U.S, we see protest messages and symbols like Don’t Shoot and Hoodies spread rapidly through social media not necessarily create an aesthetic but markers of protest. What is the place of symbolism and aesthetic in Black struggle? 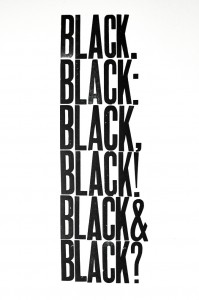 from the ‘Punctuated Blackness’ series by Kameelah Janan Rasheed

Hawa and Luam: Symbolism and aesthetics are interesting categories of discussion because they can act either as platforms for subversion or for essentialist suppression. It is for this reason that when we talk about aesthetic we are careful to specify a decolonial aesthetic. We are not interested in stylistic gestures that perpetuate social expectations of respectability or a ‘right’ expression of Blackness.  We should note that when we say aesthetic that we are not referencing what something looks like but rather how something is done. The ‘how’ we are talking about is rooted in practices of resistance. Toni Cade Bambara’s and Steve Biko’s writings have a decolonial aesthetic, Radio Freedom had a decolonial aesthetic. A decolonial aesthetic stems from aspirations to use artistic practices and processes to write, draw, sing, photograph, speak self-determination. We believe that a decolonial aesthetic is central to Black struggles because it is a tool, with multiple entry points of engagement, that we can use to imagine, shape and communicate our visions of freedom.

TFW: The Black arts movement is thought of as global but has often had a biased reach and connection in North America and Europe. As Diasporan Africans from Eritrea and Somalia, what do you see as the possibilities of connection with art being produced by Africans based in Africa and Black people in and of the Diaspora.

Hawa and Luam: Creative practices of resistance are the possibilities for connection. Art is a space of connection and meeting. It is our hope that the spaces that NSOROMMA curates are a part of and contribute to building a Pan-African Arts Movement that takes lessons from the Black Arts Movement and also expands its scope to encapsulate arts movements both in the Diaspora and on the Continent.

Editor’s note: all the art featured in this article was sourced from the NSOROMMA blog. 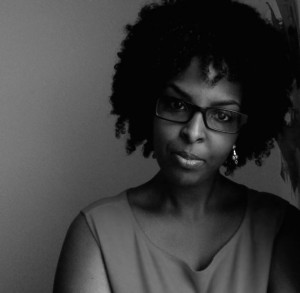 Hawa Y. Mire is a diasporic Somali storyteller, writer, youth advocate and strategist with a focus on Blackness, (dis)connection and (un)belonging. Hawa has worked locally, nationally and internationally with service providers focusing on the combined use of arts-based dialogue and expression, experiential learning and root-centred education to support, mentor, and spark innovative leadership.  Follow her @hymire. 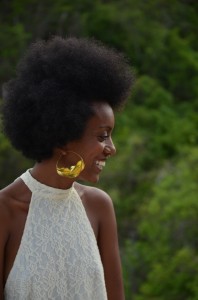 Related ItemsActivismArtsBlack FeminismBlack WomenWorld
← Previous Story Elementary Feminisms: A Call to Young Women
Next Story → “I Am Because We Are: Ferguson, Family & Freedom” #FergusonFridays