Elementary Feminisms: A Call to Young Women – The Feminist Wire

Recently, I came across an old post that had quickly surfaced on Tumblr. The post was discussing the problem with teaching girls “how to avoid rape.” I decided to share this post with a male friend of mine, and his was response was, “If girls continue to dress a certain way, how can you blame a guy who can’t control himself?”

Prior to this encounter, social issues did not have great importance to me. However, as I grow up, the harsh realities of life slowly seem to unfold. As a young girl, my parents sheltered me from the violence of rape culture. For the first time in my life, the veil was lifted and I saw the world for all its ugliness. Since this realization, I am compelled to analyze the issue of rape culture.

Being harassed or assaulted is something that most women have or will experience in their lifetime. Sexual violence too often is said to be the “realities of life” and therefore “normal.” This belief that gender based violence is normal contributes to society’s desensitization to violence and rape culture as an urgent social issue. For instance, sociologist Heather Hlavka at Marquette University conducted an interview with a hundred girls age three to seventeen. Hlavka discovered that these girls believed their everyday experiences with harassment were part of normal life.

It is heartbreaking for me to know that my generation believes that we simply can’t help sexual violence and therefore it is O.K. Why is it acceptable that “men are supposed to be aggressors” and “women are expected to tolerate these sexual advances” because, after all, “boys will be boys?”  Too many times, I have heard that it is simply our biological nature to act on impulse. Regardless if the latter is true, it does not justify nor excuse disrespectful, violent behavior.

I recall an incident last year, when a man approached me outside the mall. He inched closer and his voice crawled under my skin with each word he spoke. His hot, coated breath stifled the atmosphere. I bit my bottom lip and stared into the red circles illuminated beneath his eyelids. I ignored him for a few seconds and then I snapped around. He laughed a cynical snort. “Give me a little touch aye girl?” He stroked his hand against mine and walked away. I stared at him, dumbfounded that a man of his age would approach a girl my age.

In that singular movement, I looked at my hand as if it were covered in filth. I wiped it furiously against my skirt and ran towards the bus station to get home. I did not know then that this would not be the last time I would be harassed or shouted at with sexual requests. I remember telling my parents and, perhaps with good intentions, their response was, “How you carry yourself depends on how men will respond to you.” Such advice has never been more deceiving and dangerous. Their response was unsettling to me.   I made it a habit to change out of my navy knee-length uniform after school. I was under the impression that somehow, if I dressed differently, men would stop harassing me. But they did not. 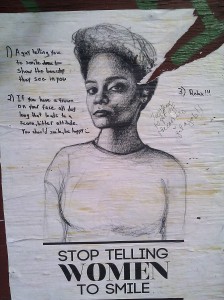 My generation, and society as a whole, needs to know that a predator can stop themselves from harming his victim. Telling women to be mindful of what they wear and how they carry themselves reinforce sexism, misogyny, and bigotry; it contributes to a false sense of security and victim blaming. When a woman is assaulted, we hear absurd responses such as, “Well, what was she wearing on the night of the attack?” and “Where was she?” Part of the problem of these questions is that they suggest that we do not recognize gender based violence as something real and tangible.

We cannot simply tell young women to avoid the so-called dangerous places. Such a warning creates the idea that gender and sexual violence only happens in those places and therefore if you do not go there, then these warnings do not apply.

It is not enough to tell women to carry and dress themselves “properly.” What is proper, and whose terms define it as such? For some, it seems perfectly justifiable to tell women to stop dressing provocatively. Problem solved—not.  This is victim blaming.

Again, I came across an article that discusses the role of the media and its influence on the perception of women. Reading this article made me draw connections between rape culture and the media’s influence on youth. Years ago, it was uncommon to see sexually explicit ads, or video games that depicted violence. While some did exist, the general public considered them to be disrespectful or perverse. As society continues to evolve, we become more desensitized to gender and sexual violence.

I recall an incident where a mixed gender group of youths were huddled around a table staring intently at a computer screen, I decided to peep over their shoulder. It was a music video with two women groomed for the male gaze. Some of the lyrics explicitly explained the man’s plans for the evening. I argued that the video encouraged male dominant sexual attitudes against women, which contributes to the normalization of rape and sexual harassment. The video suggested that women should tolerate any advances men make toward them. I argued that the media promotes the over-sexualization of women and this informs how our generation interacts with each other. As expected, the repetitive assertion was made that when women dress “provocatively,” it only provokes the predator’s interest. This made me realize that part of the problem lies in cringe-worthy comments such as these.

In today’s world, it is common to hear rape jokes by men and women. While the media does influence the minds of youth, it is ultimately us who allow it to do so. We are becoming immune to injustices just because society is saying it is trivial. This is not OK. We need to continue to change the way we view socially constructed ideas of gender. Men are not the aggressors and women are not weak. When we start questioning the roles society tells us to play, it is only then that rape culture will stop.

The purpose of this the article is not to blame men. I say this because too often I feel the need to apologize for fear of sounding too prejudice against men. I hope one day I can raise awareness to social issues without being labeled as a “ranting feminist,” which is simply a deflection tactic to end the conservation. For now, I want to encourage and support young girls in recognizing different realities of gender and sexual violence. I want people to have productive conversations that build strategies to fight against rape culture. I want young women and girls to be confident, fearless, and to respect themselves. I want young women and girls to define themselves not by what they wear, but by their character and the unique individual they are striving to become. 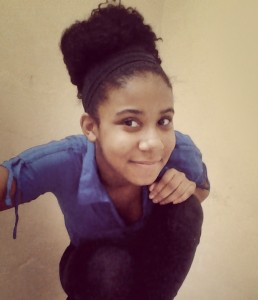 Shama Nathan is a seventeen year-old freelance writer. With a voice for feminist issues, she’s working on her first non-fiction novel The Dark Side of Our World.

Related ItemsActivismbody politicsEducationFamilyfeminismGenderPatriarchyPoliticsrapesexismsexual violenceViolenceviolence against womenWomen's HealthWritingYouth
← Previous Story Back Up, Back Off, and Listen
Next Story → Feminists We Love: Hawa Y. Mire and Luam Kidane of NSOROMMA