A Latina’s Perspective on MBK – The Feminist Wire

A Latina’s Perspective on MBK

On July 10, women of color spoke out on President Obama’s My Brother’s Keeper (MBK) policy initiative, in a webinar sponsored by the African American Policy Forum. The 90-minute webinar followed a June 17th letter signed by over 1,400 women of color from all walks of life—activists, artists, nurses, teachers, day laborers, students, academics, mothers, community leaders, and business owners, identifying as straight, queer, and transgender, and calling for a gender and racial inclusive lens that includes girls and young women of color in MBK.

As organizers of the women of color webinar noted on their website, we “all share a commitment to the expansion of ‘My Brother’s Keeper’ (MBK) and all other national youth interventions to include an explicit focus on the structural conditions that negatively impact all youth of color.” Kimberlé Crenshaw, one of the organizers stated, “The letter signed by over 1,400 women of color calls for a realignment of the frame, for the inclusion of girls and young women in the President’s initiative. One cannot advance a community’s interests without putting girls and women at the center.”

As the Latina discussant in the webinar, I spoke about the contradiction—actually, the paradox—between MBK’s stance on securing the wellbeing of families through father-centered interventions and the Obama Administration’s immigration policy of mass deportation that has been compared to the policy of mass incarceration. The most significant threat to many Latino families is Obama’s immigration policy. 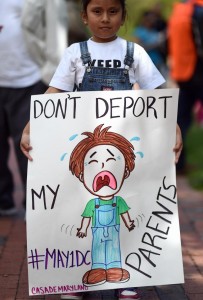 The mass deportation of hundreds of thousands of undocumented parents of U.S. child citizens is deplorable. Since President Obama took office, nearly 2 million undocumented immigrants have been deported—more than during the Bush Administration. There are 1,100 deportations on a daily basis and this indefensible policy of mass deportations is having devastating impacts: tearing Latino families apart, shattering communities, and leaving hundreds of thousands of children without parents.

When we consider the President’s policy of mass deportation in relation to the MBK’s racial justice campaign built around a theory of Black family pathology and father-centered initiatives, this Administration’s differential treatment of Latina/os is clearly evident. Because when it comes to Latinos, the Obama Administration is instituting the very fissures that it seeks to repair. Its immigration policy is not only fracturing Latino social networks, families, and creating chaos in communities, it is fundamentally reshaping Latino families in a negative way, leaving thousands of U.S. children fatherless and motherless precisely because of the President’s mass deportation policy.

It is no wonder that many Latino immigrant rights groups have baptized President Obama as the “Deporter in Chief.” Even Janet Mungia, the president of the largest Latino advocacy organization, the National Council of La Raza (an early supporter of his immigration policy), has referred to Obama as the “deportation president” and “Deporter in Chief.” 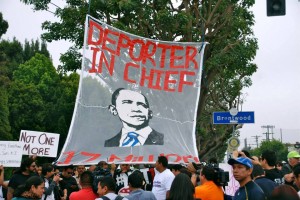 As Latinas, we need organize a Latinas Speak to articulate our position on the MBK. At the July 10th webinar, I spoke about some of the challenges Latina youth face, some we share with other women of color and others that are specific to Latina/o communities. Latina girls are beset by high drop-out rates, sexual harassment in the workplace, gender-based violence in the home and family silencing around sexual violence, as well as sexual violence outside the home in institutions such as detention centers and prisons, perpetrated by individuals and institutional actors. Our familia-first orientation has been central to our survival in the face of racial and class injustices, but when it comes to girls and young women, there is also a downside to this family-comes-first ideology.

I teach mostly Latina and Latino students at the University of California, Santa Cruz, and frequently Latina students visit me during office hours to talk about family matters. Often in tears, young women tell me stories about fathers not supporting their desire to attend college away from home; about having to miss mid-term exams and term projects to deal with family matters; about requesting an “incomplete” for course work because they needed to care for their siblings and/or parents during family crises. The parentification of children is especially acute for Latinas: the expectation that girls and young women should be the primarily caregivers for all family members or sacrifice their own aspirations for la familia, is perhaps why the four-year college graduation rate is lowest for Latinas than for other racial groups in the U.S.

We need to articulate a Latina vision for gender and racial justice in our communities that takes into account the specific challenges Latina/o youth face, girls as well as boys, because we simply cannot accept a “one-size-fits” all approach like MBK, nor an either/or framework that leaves Latina girls and young women out of the equation. Like Women of Color Speak and the earlier open letter signed by over 200 African American men that my colleague Darnell Moore wrote about, we must insist on a gender, race, and sexuality inclusive lens, a both/and framing of the problems affecting communities of color, boys as well as girls.

A re-screening of the July 10th Women of Color Speak webinar is scheduled for July 25th, with a live Q&A following the event.