200 Black Men Ask POTUS: What About Our Sisters? – The Feminist Wire

Home / Activism / 200 Black Men Ask POTUS: What About Our Sisters?

200 Black Men Ask POTUS: What About Our Sisters? 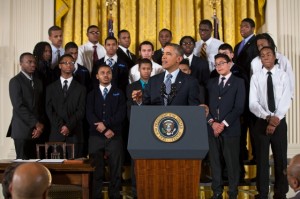 Today, the White House released a report that was spearheaded by an interagency task force organized to advise President Obama on the My Brother’s Keeper (MBK) policy initiative.

Announcing the Initiative in February, Mr. Obama expressed hope that, “By focusing on the critical challenges, risk factors, and opportunities for boys and young men of color at key life stages, we can improve their long-term outcomes and ability to contribute to the Nation’s competitiveness, economic mobility and growth, and civil society. Unlocking their full potential will benefit not only them, but all Americans…”

But MBK lacks a gender equitable lens, which, if applied, would also illuminate the particular issues impacting girls and women of color. Significantly, girls and women are not mentioned in the report, which was introduced as “a statement of progress” that only “scratched the surface of this complex issue and opportunity.”

For this reason, more than 200 African-American men signed an open letter to President Barack Obama calling for the inclusion of girls and young women of color in MBK. As Kiese Laymon, one of the organizers noted, “The men who came together to lift up this issue are organizers, professors, recently incarcerated, filmmakers, taxi drivers, college students, high school teachers, ministers, former pro­athletes, fathers of sons, and fathers of daughters. These men, identifying as straight, queer and transgender, all share a commitment to the expansion of My Brothers Keeper ­­ and all other national youth interventions ­­ to include an explicit focus on the structural conditions that negatively impact all youth of color.”

MBK is framed as a public-private collaboration between philanthropic organizations, corporations and nonprofits committed to working collaboratively to improve life outcomes for boys and young men of color. Leading foundations have promised to contribute 200 million dollars in addition to the 150 million dollars already spent to support interventions that work.

But writers of the open letter–key supporters of President Obama–say they were “surprised and disappointed” by the exclusion of girls and young women from an initiative designed to address the unique problems facing youth of color.

Marlon Peterson, a writer, criminal justice and peace advocate, and host of the television show, Both Sides of the Bars, reflected both the sentiments of those who celebrate a renewed focus on race-specific obstacles facing youth of color and those who worry about the consequences of the Initiative’s failure to address the community as a whole. “While I am glad that My Brother’s Keeper is geared to taking a race specific look at the solutions for boys of color, it misses the mark of correctly identifying that women in these same neighborhoods–that queer boys and girls in these neighborhoods–also need saving. We can’t fix the ghetto by thinking our boys live in those ghettoes by themselves.”

Historically, efforts to address opportunity gaps and other factors that disproportionately affect communities of color have been gender inclusive, yet MBK’s targeted interventions do not address obstacles facing women and girls of color. Pivoting on the President’s theme of responsibility, the letter asserts that “as Black men we cannot afford to turn away from the very sense of a shared fate that has been vital to our quest for racial equality across the course of American history.”

Organizers noted that while the exclusive framing of MBK raised some eyebrows, critics have been cautious about how to engage the President’s Initiative given how few efforts have been targeted to address the critical conditions facing youth of color in recent years. “Some say a half loaf is better than nothing, and fewer still want to criticize a President who is subject to pressures than no other President has confronted,” said Luke Charles Harris, one of the organizers of the  letter. “But African Americans share a long tradition of critical debate about how to best advance our freedom struggle, and our commitment to justice today should be no different than it was in our past. How can we tell our sisters to wait when we as a people stood up against those who told us to wait because the time wasn’t right for justice to be done?” Amplifying Harris’ reasons ‘why we can’t wait,’ prominent UCLA historian Robin Kelley noted, “the current social policy and proposals not only ignore black women and girls but they put them in greater danger, making them more vulnerable.” Paraphrasing Dr. King in responding to those who agree in theory, but would urge women and girls to take a back seat for the time being, Kelley urged, “it’s always the right time to do the right thing, even if the right thing isn’t always popular or safe.”

While the letter takes aim at the Initiative’s exclusive gender focus, organizer Darnell Moore, managing editor of The Feminist Wire and co-founder of YOU Belong, suggested that addressing the President was less of a focal point of the action than drawing attention to the moribund state of racial justice politics.  “While our letter directly addresses President Obama, it is really addressing the context that makes a racial justice initiative lacking a gender equity piece possible. It’s never easy critiquing a culture that ignores women and girls of color because so many of us men benefit within such systems. It’s also never wrong to want transformative justice for all even if that means we may have to disagree on approaches to get to that end.”

Some have justified the exclusion of girls as a mere reflection of “the metrics”–a claim that the data reflecting key benchmarks for boys and girls of color proves that there is a crisis for boys while girls enjoy far less negative outcomes. But as Oscar Blayton, a Virginia attorney countered, “Many people don’t have a clue about what black girls are facing, and simply assume that girls are doing fine. In fact, along some measures, racial disparities among girls are just as great if not greater than disparities among boys. In relative and in absolute terms, Black girls are just not thriving.” Pointing out that Black girls are suspended more than any other girls, and also more than most boys, UCLA Law Professor Devon Carbado added that Black women experience the highest rates of homicide among young women, and that Black women “are certainly not immune to racial profiling and violence as a long list of cases ranging from Latasha Harlin to Renisha McBride clearly reveals.”  They are several times more likely to be incarcerated than white women, and more likely than men to lose custody of children when they are incarcerated, more likely to have lost property during the economic downturn, and more likely to have lost a job during the recovery than their male counterparts. Studies also show that they are vulnerable to discrimination in the job market, some being excluded due to their Black-sounding names. Recounting these often hidden statistics, Carbado, concluded that “the nation must divest itself from the notion that racism impacts black men more directly than black women.”

In their attempt to debunk the myth that black women persist unscathed in spite of sexism and racism, and in their efforts to reflect the diversity of African American men, the letter is potentially unprecedented as a political statement. Noted author Kiese Leymon observed, “The men who came together to lift up this issue are organizers, professors, recently incarcerated, filmmakers, taxi drivers, college students, high school teachers, ministers, former pro-athletes, fathers of sons, and fathers of daughters. These men, identifying as straight, queer and transgender, all share a commitment to  expansion of My Brothers Keeper — and all other national youth interventions — to include an explicit focus on the structural conditions that negatively impact African-American women and girls.”

In addition to the inclusion of women and girls in both the public and private programs, other key outcomes that organizers are calling for include increased funding, expanded policy provisions, and a greater focus on structural conditions that defy individualist solutions.

This is the first of several activities the group is planning in order to facilitate dialogue between those who are concerned about the longterm consequences of MBK and those who support the Initiative as one step in the right direction.  The group plans to host a webinar, “My Brother’s Keeper: A Strategy for Success”  in June. Says Ricardo Guthrie,  a webinar organizer, “The overall thrust of the webinar and our other activities will be to extend the focus and dialogue around MBK beyond boys, beyond private philanthropic intervention and investments, and to include research and resources that effectively address gender-inclusive concerns for Blacks, Latinos, Native Americans and other non-white, at-risk youth.”

To register for the webinar or to sign the letter, write to: blackgirls2014@gmail.com