J. Crew Is Into African Fashion Now? – The Feminist Wire 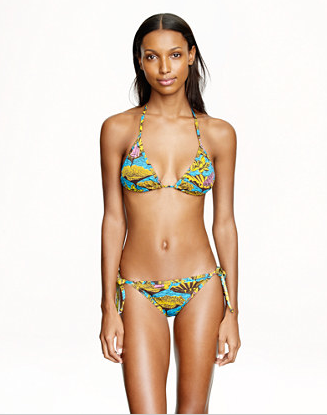 To kickoff swimsuit season, J. Crew announced the launch of its Bantu African swimwear line. Perhaps best known for its summer in the Hamptons look, J. Crew has now joined the “African” fashion trend. In recent years, a number of other U.S.- and Europe-based companies have started mass-producing imitations of African textiles and silhouettes.

Instead of simply pilfering prints, J. Crew has partnered with Bantu Wax, an African beach and surf lifestyle brand. Ethiopian designer Yodit Eklund, launched Bantu Wax in 2008, tagging it “real swimwear from the real Africa.” Eklund was born in Germany to a white father and an Ethiopian mother. She grew up in Sudan, Kenya, Egypt, and Ethiopia. Bantu Wax was inspired by her youth in the coastal cities of Ghana, Senegal, and Côte D’Ivoire. She wanted to create an ethical and sustainable African swimwear line that could help build the local economy by paying workers a living wage and operating completely from Ethiopia. Eklund’s vision is more than admirable. J. Crew, however, is a company with a questionable corporate social responsibility record that sees African fashion exclusively in terms of its market viability. 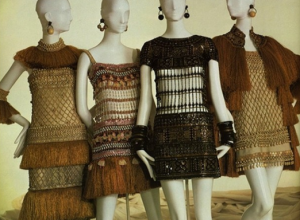 Minh-Ha T. Pham reminds us that cultural appropriation in the fashion world is nothing new, especially in the case of Africa. In 1967, French designer Yves Saint Laurent launched his Africa Collection, which he said was inspired by his childhood in French colonial Algeria. Saint Laurent used wooden beads, shells, and raffia to enhance a basic shift dress silhouette. Fashion critics praised him for taking the Western world on a sartorial safari through Africa. Harper’s Bazaar called Saint Laurent’s Africa Collection “a fantasy of primitive genius.” In effect, the magazine reinforced racist notions of Africa as “the dark continent” whose people had no sense of fashion but whose culture could be mined for raw textiles. Ultimately, Saint Laurent took credit for putting African fashion on the map.

A aso one mini shift dress from Shade Thomas-Fahm’s collection.

But a host of African designers in the 1960s, mostly women, transformed the continent’s fashion landscape. Nigerian Shade Thomas-Fahm opened Shade’s Boutique in Lagos in 1960 where she sold her original ankara print jumpsuits, aso oke dresses, embroidered culottes, and hand-beaded shoes. In Swaziland, Zora Kumalo designed elaborately beaded couture gowns that she sold to Swazi royalty and the wives of wealthy European businessmen. While Yves Saint Laurent became a fashion legend, many of these African designers were never recognized by the Western fashion world. However, this generation of designers left a lasting legacy on fashion in Africa.

Today, social media makes it harder for African fashion designers to be ignored or marginalized. J. Crew may have 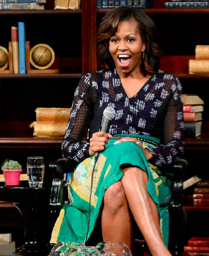 considered partnering with African designers because of the ways they have successfully used social media to create a global audience for their clothing lines. Contemporary designers including South Africa’s Nkhensani Nkosi of Stoned Cherrie and Palesa Mokabung of Mantsho and Nigerian designer Amaka Osakwe of Maki Oh have received praise from the mainstream fashion industry for their innovative designs. In 2013, Maki Oh launched a video campaign—featuring music by Solange Knowles—that went viral. That summer, First Lady Michelle Obama (who is also a J. Crew fan) wore a Maki Oh adire print top to a youth day event in South Africa. 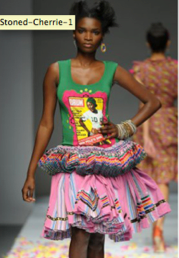 The core issue with U.S. interest in “ethnic” fashion is bigger than J. Crew’s African swimsuits. The United States’ relationship with the burgeoning African fashion industry reinforces American empire. The U.S. has dominated other African markets—oil, copper, and diamonds—for centuries. Fashion is the new frontier. Under the guise of the African Growth and Opportunity Act (AGOA) established in 2000, the U.S. government has invested large sums of money in the African fashion market, offering trade preferences and tax breaks to designers like Yodit Eklund. Other African designers and textile producers, particularly in Southern Africa, have taken advantage of the AGOA incentives. Without partnerships with Western investors, many African designers would not be able to launch their lines internationally due to exorbitant tariffs. Such unequal power relationships give the U.S control to shape the economic contours of Africa’s fashion industry.

Fashion is part of a larger debate on the continent about how much African nations should depend on foreign aid. Some businesses are opting to seek funding from private African-owned investment firms and partnerships with Africa-based international organizations. Keeping the economic power on the continent allows African fashion designers to counter Western paradigms of “authentic” Africanness. Fashion shows and fashion magazines (such as Abina, Agoo, and Oh Yes) produced on the continent become spaces where African designers can (re)define what is fashionable on their own terms. 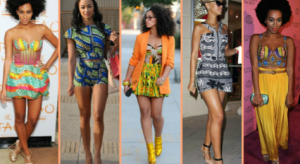 I am excited to see African fashion designers getting much-deserved international recognition for their designs and subsequently for their work to encourage ethical production practices. Contemporary designers such as Amaka Osakwe are remixing the styles and techniques of 1960s designers like Shade Thomas-Fahm, bringing them to a global new millennium audience. Yet, companies from J. Crew and Burberry to Forever 21 and H&M that sell African-inspired garments keep African designers from cornering the international fashion market.