Trump and the Narrative of White Male Victimhood: “It Hurts” – The Feminist Wire

Home / Academia / Trump and the Narrative of White Male Victimhood: “It Hurts”

Trump and the Narrative of White Male Victimhood: “It Hurts”

By Guest Contributor on November 7, 2016

In the beginning of September I published a short article on a Hawai’i news site analyzing what I thought to be obvious to most folks in Hawai’i – Donald Trump is the ultimate haole. “Haole” is a native Hawaiian word originally meaning foreign and now meaning white, particularly attitudinal and behavioral whiteness. In my scholarship I argue that haole is a particular form of situated American whiteness forged in historic and on-going colonization of the islands. The naming of haole and haoleness can be thought of as a counternarrative of whiteness, part of resistance to white dominance and U.S. settler colonialism in Hawai’i. Anyone in Hawai’i can be chided for “acting haole,” when we display arrogance and step outside communitarian cultural norms. Here’s an excerpt from my article:

Trump talks too loud, never listens, takes up too much space, and is showy and obnoxious. He is totally oblivious of others (as evidenced by how he talks about communities in cartoonish, patronizing ways, “I love the undereducated,” and to African Americans, “What do you have to lose? Try something new, like Trump”). He is a textbook narcissist—everything is about him, his entitlement knows no end, he has zero empathy, he has a grandiose sense of his own importance, he believes he is incredibly smart, talented, strong—he is “a Winner.” He, and only he, can save America. He knows everything, has all the answers. Not only does he know nothing about communities of color, immigrant communities, and indigenous peoples—he feeds white supremacist hysteria and victimhood. He and his followers are going to Make America White Again.

You would have thought I said something outrageous or truly remarkable given the immediate angry backlash. What’s interesting is that those pushing back weren’t Trump supporters. The majority were haoles offended at being associated with Trump and mad at me for my description of his ultimate haoleness. Now, it’s hard to fault the anger if I was arguing haoles are all like Trump. But I wasn’t saying that. I was saying Trump provides a textbook example of how haoles should not behave. We can’t change the fact that we are haole, but we can decide how we haole. I wrote, “for those of us who pay attention, there are important life lessons in being called out as haole.”

This experience was a sharp reminder that, even in Hawai’i where whiteness is challenged – not “unmarked” or “invisible”– or maybe especially here, because of that challenge, the narrative of white victimhood is gaining strength. In Hawai’i this narrative is tied to a particularly pernicious form of colorblind logic that makes Kanaka Maoli (native Hawaiians) perpetrators of reverse racism against non-Hawaiians. And that belief is now fueled by the national upsurge in white anger and disaffection catalyzed by the Trump campaign. (And, by the way, Hawai’i’s exoticism and national liminality in the imaginary of many white Americans worked quite well for Trump as the backdrop for his racist Birther movement, which is far from dead according to a recent poll).

Scholars in Ethnic Studies, Whiteness Studies, and Critical Race Studies have offered important insights and identified a constellation of factors behind the contemporary white racial upsurge in the U.S.: the rapid “browning of America;” the Obama presidency; the economic collapse; and movements for racial, immigrant, and indigenous justice. In terms of white male disaffection, I would add the increasingly likely transition from our first Black president to our first woman president. The gender and racial gaps in this election make clear that anti-Black racism and misogyny continue to be closely linked, especially in narratives of white male victimhood.

Donald Trump has breathed new life into white victim discourse. Describing this discourse in The Cult of True Victimhood, Alyson Cole wrote, “only victims who restore patriarchal power and enhance the retributive state readily receive recognition as true victims” (173). Sound familiar? Cole recently offered this in Fortune, “when Trump rages against the vast conspiracy colluding to bring him down—claiming last week, “I am a victim”—he’s speaking for his primarily white, male supporters who presume that they too have been denied what they rightfully deserve by a system rigged to benefit everyone else.” Trump uses racist, anti-Semitic, misogynist, Islamaphobic, anti-immigrant, ableist, and otherwise hateful language and behavior to attack oppressed communities. He demeans and degrades those brave enough to expose the violence he has done to them. Then he says HE is being slandered and is martyring himself, taking “slings and arrows” in order to reclaim America.

In her impassioned speech calling out Trump’s misogyny and defense of sexual assault, Michelle Obama said “it hurts.” Such a simple claim. “It hurts.” It hurts psychologically and it hurts physically. My students of color, women, and gender non-conforming students report increased harassment and physical assaults, along with less than satisfactory police, administration, and/or community response. They feel unsafe. This is anecdotal at this point, but I am sure social science will follow, tying Trump’s rhetoric to upticks in violence. We already have the horrific reactions (and courageous editorial response) to the Arizona Republic newspaper’s first ever endorsement of a Democrat. Long-time political commentator, Mark Shields, said of Trump on the PBS News Hour, “He’s not a dog whistle. He is a canine choir of dark impulses.” And, when the “rigged” election declares Trump a “Loser” (to use his language), those invested in the white male victimhood narrative will feel even more aggrieved.

Taking the feminist axiom the personal is political to heart, what then must we do? Positionality is important as it is the denial of structural positioning that fuels much of the vitriol, as well as the less aggressive but more pervasive white defensiveness. How do I, a white (haole), middle-class, genderqueer dyke teach in ways that are responsible and accountable in this context. And how might those methods be attuned to the different places where I might be teaching (Hawai’i, New England, the west coast, the South)? Looking beyond November 8, how do we respond to the upside-down logic that turns the perpetrators of violence, and those who benefit from state violence, into victims? While I may not reach the hard-core Trump supporter, what about those haoles turned off by Trump, but defensive about their own haoleness? And how might I connect with my white male southern students who are used to thinking in binaries (race, gender) that have helped hide their privilege, but are also sensitive to regional cultural difference. How do we make visible the deep, real, and on-going violences of racism, colonialism, classism, misogyny…? How do I make room for “it hurts” and how do I participate in stopping the harm?

I think the feminist axiom contains at least part of the answer. I hope to keep finding ways to make it personal – to tell my stories of privilege/oppression/solidarity, to encourage others to share their lived experience, to show not tell, and to listen. When we are real to each other, when we share where it hurts, we build empathy. This is nothing new to progressive pedagogies and organizing (the platforms of Showing Up for Racial Justice, BlackLivesMatter and Idle No More all emphasize building empathy and/or alliance). Learning how to move on the path of white decolonial anti-racism is a journey, and one that always needs to be attentive to people and place. Learning how to haole differently is one particularized process, a current in the larger sea. Trump can help on both fronts, the general and the specific/located. He challenges those of us who are white/haole to do better. To materialize our disidentification with him and ultimate haoleness, we need to construct alternative models for humble, compassionate and respectful being and doing. The narrative of white male victimhood is not inevitable, just as Trump is not forever. 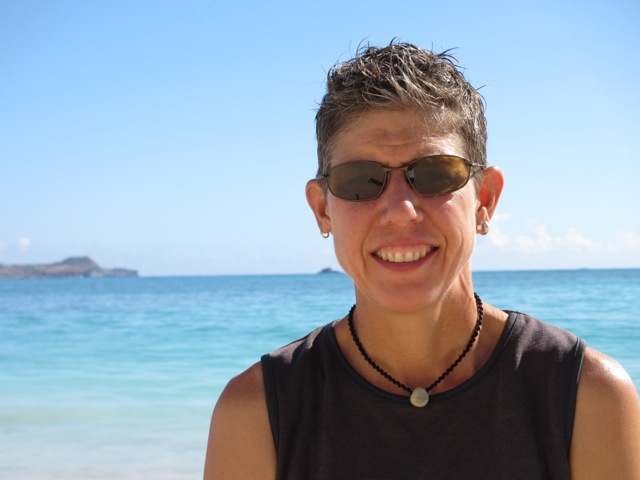 Judy Rohrer is a theorist with expertise in a number of fields that animate critical interdisciplinary scholarship: feminist studies, queer studies, indigenous studies, critical race theory, critical ethnic studies, and disability studies.  She grew up in Hawai’i and earned her M.A. and Ph.D. in Political Science from the University of Hawai’i at Mānoa.  Her latest book is Staking Claim: Settler Colonialism and Racialization in Hawai’i (The University of Arizona Press, 2016).