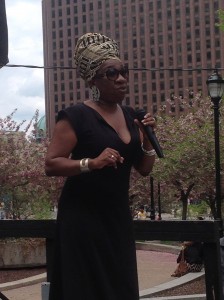 Tarana Burke, Just Be, Inc., and Organizer of Rock A Gele for Our Girls

On Saturday, May 3, 2014, documentary filmmaker and TFW Associate Editor Aishah Shahidah Simmons participated in the “Rock A Gele For Our Girls” Rally held in Philadelphia in support of efforts to rescue and safely return the 234-276 girls who were abducted in northern Nigeria three weeks ago. In approximately 48-hours, Activist and Cultural Organizer Tarana Burke, the Founder and Director of Just Be Inc., an organization focused on the “health, well-being, and wholeness of brown girls everywhere!” conceived and organized the rally whose purpose was to raise awareness about the growing, global grassroots movement to #BringBackOurGirls. Burke put out the call:

On April 16, 2014, 234 teenaged girls were abducted from their school in northeastern Nigeria. They have been missing for two weeks without any major media coverage. As a show of solidarity for the mothers and families of these missing girls we are calling on women to wear headdress in the tradition of African women and join us as for a rally. We encourage everyone who believe #blackgirlsmatter to come out so collectively we can draw attention to this International travesty. 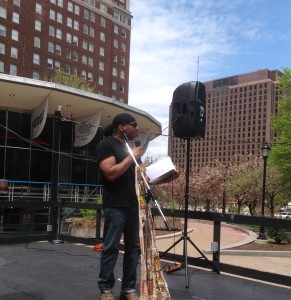 The Philadelphia rally was a part of a global movement of rallies/protests in response to the sobering reality that for almost two-weeks there was minimal on the ground efforts by the Nigerian government; and essentially no coverage in the western mainstream media on any activity to try to locate the girls and return them to their families immediately.

Filmmaker, Storyteller, and Activist Jos Duncan, who is also the Executive Producer and Director of GriotWorks, produced, directed, and photographed a powerful short video, which captured the highlights of the rally.

While there is unanimity in the #BringBackOurGirls movement about the imperative need to rescue and return the girls to their families post haste, there isn’t a consensus amongst many activists about the best route to take.

A precursor to the current state of affairs 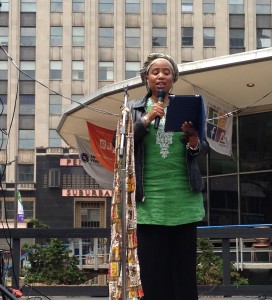 During her remarks on May 3, 2014 which are published in their entirety on her AfroLez®femcentric tumblr blog, Simmons joined the chorus of concerned activists in Philadelphia and nationally, who both raised the issue of gender-based violence against girls, while cautioning everyone to refrain from military intervention and Islmaphobia:

…WE MUST hold our elected officials accountable and DEMAND that they to put pressure on the Nigerian government to locate and rescue these girls immediately.

…WE MUST ALSO DEMAND that this ATROCITY is NOT USED as a SCAPEGOAT for a US/Western invasion of a sovereign nation (troubles and ongoing destabilization not withstanding). In the US, we can look to our not too distant past to recall how rescuing girl children and women from the Taliban was used as one of the reasons to invade Afghanistan. Rescuing the girls and women was the excuse not the reason. The real reason was for US/Western control of the region for their resources.

We MUST NOT ALLOW ISLAMAPHOBIA cloud our vision. There are numerous reports that state that the girls have been trafficked into forced slavery (under the guise of marriage). Some reports link this inhumane behavior to Islamic traditions. Make no mistake the origins of forced-marriages are equally connected to Christianity and Judaism as they are to Islam. The Rev. Dr. Wil Gafney wrote a brilliant article on May 2, 2014 for the online publication Religion Dispatches detailing the painful ancient origins of this contemporary practice.

Regardless of their rhetoric, the militia group Boko Haram that many cite as being responsible for this (among so many other) unspeakable crimes is not practicing Islam. They are an opportunist, heavily armed militia whose objective is political and not religious or spiritual. This mass kidnapping is NOT connected to Islam. Let’s not allow the media, elected officials, colleagues, comrades, family, and/or friends lose focus. The issue is the return of the girls as swiftly and as safely as possible.

Let’s resist any attempts to sacrifice these girls for a larger (US/Western control of Nigeria’s oil) agenda, which could result in an invasion in their names and on their bodies.

We call for the rescue and safe return of our girls without additional or as little bloodshed as possible.

We demand that western nations refrain from scapegoating the kidnapping of our girls for a larger agenda. Keep the focus on bringing our girls back… 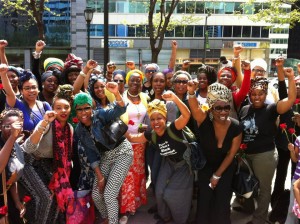 Rock A Gele for Our Girls
photo credit: Bill Holmes

In response to the latest news about a US/UK military intervention, Dr. Dana-Ain Davis who is a professor of anthropology in New York said,

I find it really interesting and problematic that women of color support for the girls’ return is equated with supporting military intervention. Many of us, myself included, wanted more attention paid to the issue, especially in the media. We wanted the world to know that those girls lives matter to us. However, the backlash is mounting and we’re being treated as hash tag activists who don’t understand international politics. Many of us were not asking for military intervention. We were and are asking for updates, political analysis of what is happening in Nigeria. We’re asking for the girls’ safe return while simultaneously exposing gendered violence in Nigeria and globally. We understand global politics and are able to make important distinctions about issues on the world stage. 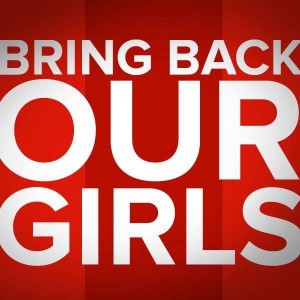 This story is unfolding daily and sometimes hourly. Please visit the BringBackOurGirls Facebook page  and @BringBackOurGirls twitter page for some of the most up-to-date information on this latest crisis occurring in Nigeria. Regardless of if you’re in favor of a US/European military intervention or not, it is imperative that we always keep the focus on the girls’ lives at the center of any and all discussions and decisions.