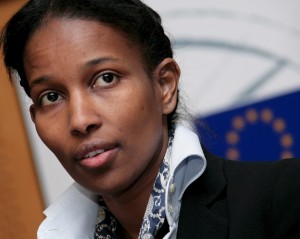 According to the Brandeis Muslim Students Association,

There is a fine line between freedom of speech and hate speech. Hirsi Ali has shamelessly passed this boundary as her remarks no longer regard her experiences, but rather condemn an entire religion and other minorities as a result of her prejudices and biases. Instead of encouraging respectful discussions and debates, she incites and supports insensitivity and irresponsibility by abusing freedom of speech as a way to justify her hate speech.

But even as Brandeis admitted that Hirsi Ali’s past statements “are inconsistent with Brandeis University’s core values,” they still described her as an “advocate for women’s rights.” Coverage of the controversy that followed Brandeis’ decision likewise presented Hirsi Ali as a “feminist,” a “women’s rights advocate,” and a “vocal critic of women’s oppression.” Even progressive commentators have called her a “fierce advocate for the rights of women, particularly Muslim women.”

In these narratives, Hirsi Ali’s reputation as a feminist works as a kind of progressive redemption – the “silver lining” balancing her other reputation as a bigot. But in the eyes of many Muslim women, who are constantly battling the double-edged sword of Islamophobia and misogyny, Hirsi Ali’s intervention into the cause of women’s rights, and the public approbation of said intervention, renders her even more dangerous.

The concern is not over Hirsi Ali’s chosen subject matter – hardly anyone is claiming that misogyny is absent in Muslim majority countries – but how an American audience will interpret what she is saying and apply it to the already pernicious debate around Muslims in the United States. Considering the tendency for right-wing Islamophobes to co-opt “women’s rights” to justify their anti-Muslim bigotry, as well as Hirsi Ali’s own history of promulgating such bigotry, the concern is that her intervention into the issue of gender equality in Muslim societies will strengthen racism rather than weaken sexism.

Hirsi Ali is one extreme of an oppressive “double-bind” facing Muslim women’s rights defenders. When Muslim women challenge gender injustices in their communities, their struggles are often hijacked by Western Islamophobes to bolster the racist claim that Muslims are uniquely or particularly misogynistic. On the other hand, when Muslim women speak out against this Islamophobia and racism, they are accused of apologizing for Muslim fundamentalists, something we have seen quite starkly in the Hirsi Ali/Brandeis controversy. For instance, Jonathan Tobin at Commentary magazine dismissed criticisms of Hirsi Ali as a “refusal of the West to confront the truth about Islamism” while Zev Chafets at Foxnews.com said that Hirsi Ali was a victim of “honor killing” at the hands of Brandeis University because she “dared to criticize Islam and Muslim behavior in the same way other religions and other human behaviors get criticized in an open society.”

The stereotype that Islam justifies violence against women, or that Muslims uniquely hate women, is unfounded, dangerous, and brings devastating effects to both Muslims and non-Muslims alike. At the same time, no community is immune from gender discrimination and oppression. Muslims, like everyone else, experience gender injustice. And, like many other forms of injustice, this sexism is justified in the name of “religion,” “culture,” or “tradition” by patriarchal spokespeople who take advantage of their power positions to promulgate right-wing religious interpretations. When Muslim women challenge these patriarchal interpretations, they are regularly accused by members of the Muslim Right (and even some American leftists) of betraying their culture, religion, and nation in the name of their “imperialist oppressors.” What is clear is that both right-wing fundamentalists and right-wing Islamophobes work under a common MO: manipulate women’s bodies to consolidate political gain.

The more Ayaan Hirsi Ali becomes the “face” of Muslim women’s oppression and resistance, the tighter this bind becomes. Contrary to the accusations of right-wing pundits who cast her as the victim of “censorship,” Hirsi Ali enjoys many opportunities to disseminate her views, from memoirs to TV appearances, and Brandeis itself has extended an invitation for Hirsi Ali to speak on campus. Not only are many deserving voices drowned out by the mainstream media’s preference for Hirsi Ali, but also her monopolization of the discourse works to reinforce the dubious association between feminism and imperialism. This association alienates many Muslim women who are rightfully frustrated at having their experience manipulated in this way, and it leaves Muslim women’s rights defenders more vulnerable to accusations of “imperialism” by the Muslim right.

Worst of all, the double-bind made worse by Hirsi Ali encourages Muslim women to stay silent on the issue of gendered violence in their communities, lest their words be “recruited” by right-wing xenophobes. It is this aspect of the double-bind that is the most pernicious, as it is based on a conversational shift from the dangers of bigots using feminism, to the dangers of feminism as it could be used by bigots.

The difference is subtle but it has profound implications. When any discussion over gender justice in Muslim societies presents the threat of being co-opted by Islamophobes, the temptation to avoid the discussion altogether becomes disturbingly strong. As a feminist from a Muslim background, I myself struggle with this discursive temptation every day. Instead of condemning the co-optation of feminism by deplorable ideologies such as racism and colonialism, the double-bind tempts me into condemning otherwise admirable values such as gender justice simply because there is the possibility they could be co-opted by deplorable people.

To be clear: There are plenty of great reasons to reject Hirsi Ali for an honorary degree besides the fact that she represents one extreme of the double-bind. Contrary to the claims by right-wing pundits, Hirsi Ali was rejected for an honorary degree at Brandeis University because she espouses deplorable positions, not because she’s a “critic of Islam.”  And we need not invalidate or belittle her personal experience with gender violence to find her political positions and actions deplorable.

Take, for instance, her bigotry (She calls Islam “a destructive, nihilistic cult of death” and called Islamophobia a “myth”); or her militarism (“we are at war with Islam” and must “crush” the enemy with force); of course, her paranoia and fear-mongering (“there is infiltration of Islam in the schools and universities of the West”) is also illustrate of her unworthiness.  There is also her hypocrisy (she’s a self-purported advocate for free speech but advocates the abolition of Muslim schools, saying “All Muslim schools. Close them down.”) And her apologetic stance towards right-wing terrorism, extremism, and fascism (she said Norwegian terrorist Anders Breivik’s views were “censored” and that  “he had no other choice but to use violence”) is yet another indicator of her views and politics.

These are the legitimate grounds upholding the reversal of Hirsi Ali’s honorary degree, not airing our dirty laundry. The real issue in the Brandeis debate is (or should be) her and not how people might interpret her.

Crucially, critics of Hirsi Ali should avoid the urge to overcompensate in their critique of colonial feminism by generalizing from the sins of Hirsi Ali to local women’s rights movements in the Muslim world. A number of Muslim women’s rights activists and scholars raise this concern, warning Western-based feminists that, in their laudable mission to dismantle the kind of colonial feminism espoused by Hirsi Ali, they often (unintentionally) mischaracterize sexual politics in Muslim contexts, bolster local conservatism, or belittle local women’s rights defenders working in Muslim contexts. Critics of Hirsi Ali can undermine genuine anti-racist feminists working in Muslim contexts when they reduce said feminists to their orientalist “recruitability,” that is, their potential to be hijacked by Western imperialism, regardless of how nuanced their analysis or how vigilant their strategies against the dangers of colonial co-optation.

Given that Western imperialism has done a very good job at co-opting things over the last couple hundred years or so, this leaves very little room to discuss violence against women in Muslim contexts legitimately, if legitimacy is based on the litmus test of recruitability. So for those of us who insist on an open discussion of violence against women in Muslim contexts, the knee-jerk reaction to reject all calls for women’s rights on the grounds that they could be co-opted is not an ethically viable one. And yet, we must figure out how to have this conversation in a way that does not undermine our shared struggle against bigotry and that is simultaneous, compatible, and integrated with a discussion of Islamophobia.

Surely one step is to acknowledge the conundrum in the first place. We need to bring the double-bind to the fore, to expose how it operates to silence women who are concerned by both bigotry and sexism. Only then will we figure out how to dismantle it. But regardless of how we end up escaping the bind, one thing is clear: Ayaan Hirsi Ali won’t get us there. 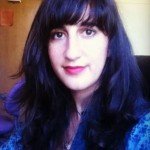 Rochelle Terman is a Ph.D. Candidate in Political Science at the University of California, Berkeley studying the dynamics and consequences of transnational human rights advocacy, especially around “Muslim women’s rights.”  She is also a council member for Women Living Under Muslim Laws.