Internalized Misogyny within the Geek Community – The Feminist Wire

Internalized Misogyny within the Geek Community

When geek culture started to truly flourish with the increasing profitability of superhero movies, supernaturally based TV shows, and renewed interest in the science fiction and fantasy genres, new fans started pouring in. The effect of social media is a large community of fans — or fandom. Keeping in contact, planning events, having meet-and-greets, and developing friendships has become a staple of online fandoms. Sharing theories on the latest episode of Sleepy Hollow, debates on the original Star Trek series vs. the reboot, speculation on upcoming Marvel movies, gushing over the newest Flash trailer, and complaining about the wait between Sherlock series, are parts of belonging to the geek community. Not everyone likes the same shows, movies, books, or comics, but everyone can belong to a fandom within the larger community.

At least, this is the core of what a community should be.

There is, unfortunately, a long history of problematic behavior within the geek community. As geek-related media becomes more mainstream, there is a notable increase of diverse fans within the community: women, people of color, queer people, and other minorities. We’ve always been there, but the gift of social media has simply shined the light on us. 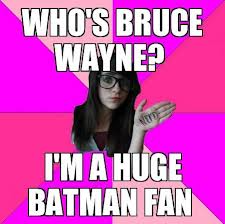 It is because of this light that backlash has formed. Women, in particular, are often on the receiving end of this backlash. When women emerged as  a noticeable contingent within the geek community, male fans created the “fake geek girl” meme in response. The meme portrays a young woman wearing glasses, in make-up, holding up her hand which contains ‘nerd’ written in marker. Impact font words discredit her geek cred. Examples are “Who’s Bruce Wayne?/I’m a Huge Batman Fan” or “I love to read/Harry Potter, Twilight.” The point of the meme is to discredit female geeks and exclude them from the community.

This is not a new phenomenon.

Major names in the geek community have contributed to the exclusion of women and other minorities for years.  Michael Kantor, Gerry Conway, and Todd MacFarlane have implied that because women and minorities have been marginalized throughout history they are marginalized in comics as an excuse for why there is not more minority representation in comics.

Frank Miller is one of the biggest names in the comic book field today, and a main staple of his writing involves the rape and violence of women. Miller denies that there’s anything wrong with using violence against women as a storyline. Such storylines are designated with their own trope, called “women in refrigerators.” A trope wherein female characters are killed (or raped, or suffer some other form of violence) solely to further a male character’s story or development.

Celebrity geek Kevin Smith refused to include any women on his show Comic Book Men because, as he explained, “the show’s called Comic Book Men” and including women would be against “the reality of the comic book stores.” Comic book companies also contribute to misogyny by sponsoring contests in which the contestants are required to draw a popular character in a bathtub on the verge of killing herself.  hings like this could be potentially avoided if companies included more women in their ranks as writers, editors, and artists, but unfortunately, companies like DC Comics, fired and avoided hiring women for their new line of comic books, known as the New 52.

You’d think that women hoping to carve out a space within the community would band together and protect each other. This, sadly, is far from the truth.

Internalized misogyny is still a truth we have to deal with everyday. Women are often socialized to compete with each other. Not for jobs or educational rankings but for the approval of men. This effect trickles down into all aspects of our lives, and impacts how women deal with other women within the greater geek community.

Allie Townsend wrote an article 2011 on Time Tech titled “There’s a New Geek Girl Site in Town. I May Already Hate It.” Townsend claims that the “internet culture has evolved way past the gender divide” and yet her very article reeks with internalized misogyny. Instead of supporting a new site created to give women a safe space within a community that positions women as sex objects or discredits women’s abilities at every turn, Townsend invalidates its very purpose. Throughout her article, Townsend puts down women-centric geek sites and blogs.  She implies that because she’s never personally experienced any sexism in geek fandom, it must not exist. This invalidates the experiences of real life women who have been harassed at conventions for their costumes or aggressively pestered by men when walking into a comic shop.

In 2012 Tara Tiger Brown wrote a similar article called “Dear Fake Geek Girls: Please Go Away.” Already the article singles out women as the “other,” seeking to shame them and make them feel unwelcome within the community. Brown claims that as a legitimate “geek girl,” she doesn’t like the sudden influx of “pretentious females” who have apparently “figured out that guys will pay a lot of attention to them” if they pretend to be interested in video games or comic books. What is ironic is that Brown is directly playing into the hands of the patriarchy by singling herself out from other women. She indirectly places herself above other women as if to say to men within the community, “See. I’m not like those other girls.” Other women who do this seek to gain male approval by tearing other women down.

Brown closes her article with this statement:

Those that are deceitful about being a geek do it because deep down they want to feel that hunger to be so into something you can’t eat or sleep, but just haven’t found their thing yet. Don’t pretend to love something because you think it will get you attention. Don’t think that you can take a shortcut because there isn’t one. Dig deep, dig to the roots, dig until you know things that others you admire in the subject matter don’t know or can’t do. Then go ahead and proudly label yourself a geeky girl.

One has to ask: how does a woman find this elusive, magical place that Brown describes? And when she has found it, how does she prove herself to Brown, Townsend, and the men who would seek to challenge her claim to geek culture?

Brown and Townsend are products of the patriarchy that encourages a division between women. You have women like yourself, and then you have “other girls.” Women who claim to be real women, or real geeks as Brown and Townsend do, are only contributing to the overall sexism that persists in our society.

Further ostracizing women from the community doesn’t earn one a place within it. Male fans will continue to harass and ridicule women in an attempt to exclude them. There is no magical sign or symbol that flashes “not like those other girls” when a woman is at a comic book convention. Male fans will still see someone they believe doesn’t belong.

Feminism at its core is about creating equality between all men and all women. So what does it look like to create a feminist geek community?

We should be embracing and celebrating all women, and that includes all women. If a woman of color expresses her disappointment and frustration over the lack of other women of color in Marvel’s movies, listen to her. If a trans woman wants to know if there are any series with trans characters in them, show her. If there’s a cheerleader at your high school or local college who wants to know more about comics, guide her.

There isn’t any set criteria for what makes a woman a geek. If you like Dr. Who, Supernatural, Sleepy Hollow, Pacific Rim, comic books, young adult novels, or anything within those parameters and have a passion for it, you can be a geek.

Most fans are born through someone introducing them to the content. So if women want to start reading Thor comics so they can learn more about their favorite character Loki, don’t accuse them of just being dumb hormonal fangirls. Tell them what issues heavily feature the character. Give them an overview of the character’s overall history. Link them to his wiki site. Share your favorite scans with them.

No one is born with all of Marvel’s 60+ years of history stored in their heads. No one wakes up having seen every season and movie of Star Trek without watching them first. No one is born knowing every doctor who ever was on Dr. Who. It takes time and effort to know and learn all you can about TV shows, movies, books, comics, etc. Time and passion, which are really all you need to be a geek. It’s truly as simple as that. 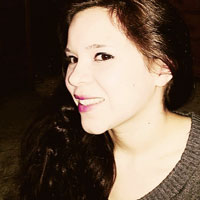 Desiree Rodriguez is a burgeoning writer with a heavy social justice slant worthy of an intersectional queer feminist. In her leisure time, Desiree examines various fictional media through this lens. Through writing both non-fiction and fictional pieces, Desiree hopes to further educate herself on social issues, as well as create a wider spectrum of representation and awareness in media related subjects.