May 25th is African Liberation Day (ALD).  The Feminist Wire is celebrating ALD with two interviews of African Feminists We Love: Amina Doherty, a Nigerian feminist ARTivist, and Fadzai Muparutsa, a Zimbabwean queer feminist activist whose interview will be published on May 30, 2014. 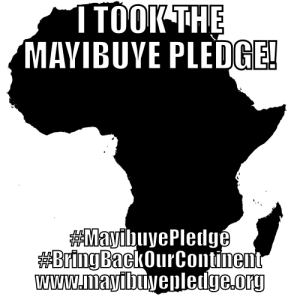 “We rise up and come together as Africans globally, working for a continent where self-determination, as well as physical, emotional, social and economic wellbeing are guaranteed to all.” says the Mayibuye Pledge, a statement written on this African Libereation Day by Africans ‘from many physical, spiritual, and political locations’.  Both Amina and Fadzai have committed themselves to the pledge and called for a return to Africa outside of neo-colonial, neo-liberal and reactionary paradigms. 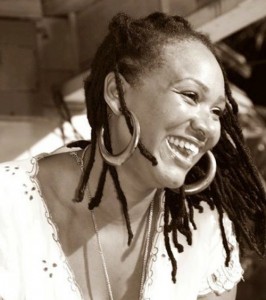 Amina Doherty is a Nigerian feminist ARTivist whose work focuses on feminist philanthropy and creative arts for advocacy. She has facilitated learning initiatives on women’s rights, youth development, philanthropy, and economic justice. Amina actively supports several community-led media platforms and brings to her activism a passion for music, art, travel, photography, fashion and poetry. Prior to her role as the Founding Coordinator of FRIDA | The Young Feminist Fund, Amina worked in the women’s rights grant-making program at the Sigrid Rausing Trust in London. Amina sits on the boards of Just Associates (JASS) an international feminist organization that trains and supports activist leadership, the Blue Mountain Arts Institute in Jamaica, and the Global Fund for Women.   Amina is the co-creator of Our Space is Love, an online community platform created by two African feminist friends who recognize love as revolutionary and the guiding principle of their feminist practice.  You can tweet her: @Sheroxlox or find her on Tumblr: @sheroxlox

Hakima: How did you come to feminism and how do you feel it is defined in your life and activism?

Amina: I formally came to name myself feminist during my undergraduate years at university. It was there, sitting alone in empty classrooms and cubby holes that I found myself lost in the writings of women like Chandra Mohanty, Gloria Anzaldúa, June Jordan, Patricia Hill-Collins, Joan Morgan and Audre Lorde. It was there, in the cold dark corners of the library, that I found myself fingering my way through dog-eared books looking for language to help me articulate who I’d always known myself to be. At the time I struggled with the complex academic language that I found in a lot of feminist literature but I came to understand that so much of what these women talked about was so much a part of my own life and my own struggles. From their words I was able to make connections with the life stories of my mother and my grandmothers – women who (at least in my eyes) were finding ways to actively resist everyday oppressions and were creating alternatives for themselves and families. It was at this time that I was able to recognize in myself a messy and quite complex African middle-class feminism; a feminism that didn’t have all the answers, but that on a very basic level imagined a world in which all women and all people could be free.

Over the years my journey to feminism as a political ideology, and as a way of being in the world has been informed by my experiences as a Black, African woman living in the diaspora. The feminism wherein I have come to call home is one that is informed by community, by collectivity, by play, by celebration in both my work and daily life. It is a feminism that honors both my own needs and the needs of those around me.

Hakima: You often work at the intersections of culture, art and African feminism.  An intersection that sparked the popular imagination this year: from Chimamanda Adichie to Beyoncé.  How do you understand this intersection and what opportunities do you see within it for advancing a feminist agenda?

Amina: Well, first off, I think that we must be allowed to be diverse and different.  Culture is a process – a constant becoming – it is characterized by our differences as well as our similarities. I have to say, I respect Bey who, it seems, is working through her own understanding of feminism under the scrutiny of the public eye. We have not and will not all come to feminism in the same way. And yes, there may be folks who have no coherent politics and there are others who are working through their politics – there is no one right way to be feminist. At the end of the day it is up to each of us to determine what we take from what is around us and what we use to inform our practice.

I do think, however, that what popular culture and art provides is a space to generate dialogue and to help us both collectively and individually navigate the messiness that ensues as we begin to interrogate our ideas around sexuality, power, race, class, gender and identity. I think that it is precisely within the domain of culture and art that we see some of the most visible, vibrant and persuasive expressions of African feminisms today. Engaging with culture and art does help (I think), to equip us with thinking tools, new language and ideas that can help us not only reflect our realities but to also begin to imagine and create our own alternatives.

I recently watched a conversation between bell hooks, Janet Mock and Marci Blackman and Shola Lynch who talked about liberating the black female body. Although I could talk about so much of what was said, what really struck me was this idea of creatively constructing an alternative vision of a universe that we (as black women) want for ourselves. bell hooks asked the beautiful question: “What do I look like when I am free?”

Hakima: You have been deeply involved in global young feminist activism and philanthropy.  What are some of the ways in which young feminists are pushing the boundaries and advancing feminist agendas globally?

Amina: As an African feminist and as part of the largest generation of young people in history, I recognize that young people and especially young women have a critical role to play in the world today. Even as we continue to hold the line in the face increased discrimination and violence, and as we face new challenges and opportunities posed by changing economies, the rise of religious and cultural fundamentalisms, climate change, armed conflict and the social impact of new communication technologies, young women are actively organising and using a variety of creative strategies to do this.

I look at for example, groups across the continent like Nazra for feminist studies in Egypt working on knowledge production and documentation, and Katswe Sistahood in Zimbabwe who are using creative means like theatre to support young, LGBT and rural activists and sex workers and are working to combine safety and wellbeing with rights organizing; or groups like YFem Namibia using poetry, spoken word and other means of creative activism to generate new feminist knowledge, nurture creativity, and encourage sisterhood and solidarity and healing. I look at the connections being made and expressions of solidarity between young African and Caribbean feminists via platforms such as Code Red for Gender Justice and the CatchAFyah Caribbean Feminist Network and I am so inspired! I am moved by these young feminists who are stepping up and stepping out and leading feminist community organizing under increasingly violent circumstance as new forms of patriarchy show up under the guise of a neo-liberal capitalist agenda and through rising fundamentalisms, conservative traditionalism and militarism. Also at a time where much of our language has been depoliticized and spaces to further radical struggle are being lost, there is a much stronger urgency to show up and to organize. That said, I am inspired by the various forms of grassroots organizing that are bringing us (as African feminists) closer together and making us collectively stronger through inter-generational alliance building, solidarity from across the continent and diaspora, relationships that are emerging both online and offline – I think we know that we cannot be satisfied with doing things the same way that we have been so I think there is a collective waking up happening. I recently signed the MAYIBUYE! iAFRICA! pledge recommitting myself to this work.

Hakima: As a global African, living and working in the Caribbean and of Nigerian origin, how do you understand the intersections of your African identity and identity as a feminist.

Amina: Mmm. What is it to be a Black, African, Queer woman living in the diaspora and moving through the world in that way? Well for me that has meant naming myself as such so that while geographically located in the Caribbean, this has meant working in the broadest, most inclusive sense.  Having  lived at the intersections and on many margins and having been forces to negotiate belonging in many spaces, I have come to imagine African liberation as something that far exceeds the limitations of national borders and boundaries. My identity as a Pan-Africanist and transnational feminist has led me to become deeply committed to helping to unite and elevate the voices of women from across the continent and the diaspora. We have so many stories to share and so much to learn from each other.

Hakima: From who do you draw inspiration for your work and activism?

Amina: Such a large question and there would be too many to name! (laughing) But I suppose I will say that I draw inspiration, knowledge and leadership from the many feminists particularly from the South who have led the way in Africa, in the Caribbean and globally. I am inspired by the many feminists that continue to recognize and build resistance to all forms of discrimination and oppression against women.