Demeter Press at Risk of Closing: Is Motherhood a Feminist Issue Worthy of Support? – The Feminist Wire

Home / Family / Demeter Press at Risk of Closing: Is Motherhood a Feminist Issue Worthy of Support?

Demeter Press at Risk of Closing: Is Motherhood a Feminist Issue Worthy of Support? 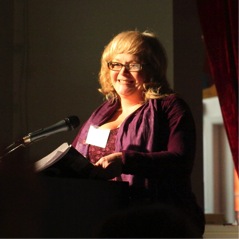 Do we need a feminist movement for mothers? Do motherhood scholars need their own association and publisher? Andrea O’Reilly, founder of Demeter Press, the first book publisher focused specifically on the topic of mothering/ motherhood, says we do, and she calls it matricentric feminism. Demeter Press has published books on several facets of motherhood, and future titles include: Muslim Mothering, Mothering and Performance, Black Motherhoods, Feminist Mothering, Mothers Under Fire: Mothers In Conflict Areas, a memoir on raising an adopted child with Fetal Alcohol Syndrome (title TBA), and the first edited collection on the SlutWalk movement.

O’Reilly calls motherhood the “unfinished business of feminism.” Mothers, as a category, bear the economic costs of reproducing in terms of lost wages, access to paid employment, and a lifetime wage gap. O’Reilly goes further to argue that a feminist movement for mothers is necessary to bridge the gap between maternal experience and feminist theorizing. I confess since graduate school, I’ve not kept up with developments in feminist theory and the rich work coming into the canon from intersectionality theory, global feminism, queer feminism, and womanism. But I understand why Andrea O’Reilly is calling for ‘maternity’ to be understood as a subject position worthy of its own room in the house of feminism:

Significantly, during the 2nd wave when white women were rightly challenged for their white bias and privilege, they recognized the need for change though they were not themselves racialized women. So I am left still asking questions: Why are non-mother feminists not capable of doing the same for mothers today? Why are non-mothers not able to appreciate and respond to the demands of inclusion made by mothers as white women did for racialized women in the early years of the 2nd wave? Why is motherhood not acknowledged as a subject position in constituting gendered identities? Why do we not see maternity as an interlocking structure of oppression as we do with race and class and include it in our gendered analysis of oppression and resistance? Why do we not recognize mothers’ specific perspective as we do for other women whether they are queer, working-class, racialized, et cetera? Why doesn’t motherhood count or matter?

Despite the centrality and significance of the topic of motherhood in academe, as evidenced by the numerous articles published each year on motherhood, and the growing number of university classrooms across the disciplines and academic levels that are now teaching this topic, a research association and a scholarly press on the topic of motherhood did not exist prior to the founding of the Motherhood Initiative for Research and Community Development (MIRCI) in 1998 and Demeter Press in 2006. Indeed, scholars from a multitude of fields (including but not limited to Sociology, English, Family Studies, Psychology, Women’s Studies, Canadian Studies, Cultural Studies, Religious Studies, Anthropology, Law, Fine Arts, Political Science, History, Communication, and Literature) name motherhood as their central research area, yet they did not have a press or association they could “call their own,” one that specifically focused on their research interests. (Keynote address, Museum of Motherhood conference, New York, March 6, 2014) 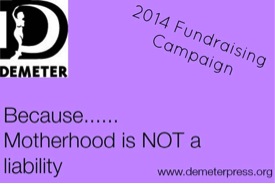 In 2006, Demeter Press (DP) was born in the living room of an old farmhouse in rural Ontario, and this month it will crack the spine on its fiftieth publication. Despite tremendous international support, and the worldwide distribution of its fiction, non-fiction, and academic titles, the Canadian government denied DP a publishing grant that was both anticipated (DP received these funds in 2013), and needed (it costs close to CAD$6000 to publish each title). The reason for the denial? In spite of a hugely profitably year, and some of DP’s books entering a third print-run, the Editor-in-Chief was told that DP’s publishing ethos was too focused and not worthy of funding. This news translates into the message that: Motherhood is a liability. In response, DP launched an Indiegogo campaign, which runs through June 9 and to date, has raised nearly the CAD$20,000 needed to continue publishing the books in its list for 2014-2014 and be eligible for grants next year.

Authors and readers of Demeter books who love their books may give back to Demeter and support the press in a variety of ways: buying books through a 50% off sale, asking libraries to do the same, making a donation in any amount to the fundraising campaign, and spreading far and wide their call for support. Full details may found at www.demeterpress.org. 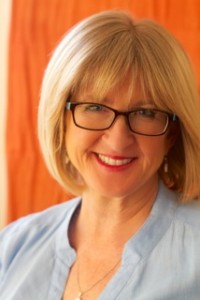 Christine Morton, PhD, is a sociologist whose research has focused on women’s reproductive experiences and quality improvement in maternity care. She founded ReproNetwork.org in 1998, a listserv for social scientists who study reproductive experiences, behaviors, and ideology. Since 2008, she has been research sociologist at the California Maternal Quality Care Collaborative at Stanford University. She is the author of Birth Ambassadors: Doulas and the Reemergence of Woman-Supported Birth in America.