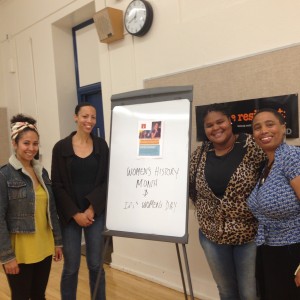 On Friday, March 7, 2014, TFW Associate Editor Aishah Shahidah Simmons gave a presentation on the importance of naming and ending sexual violence with approximately 50 African-American and Latino students from Washington Prep High School  and Duke Ellington Continuation School’s Women of Color in the U.S. class  in South Los Angeles. Usually based in Philadelphia, Pennsylvania, Ms. Simmons was in residence in southern California as the Erma Taylor O’Brien Distinguished Visiting Professor at Scripps College. This International Women’s Day (IWD) presentation was conceived and organized by TFW’s Contributing Editor Sikivu Hutchinson who is an award-winning author, senior intergroup specialist for the Los Angeles County Human Relations Commission, and founder of the Women’s Leadership Project (WLP), a high school feminist mentoring program. While WLP’s focus is on girls, this IWD presentation was mixed gender because sexual violence impacts everyone directly and/or indirectly.

During her presentation, Simmons screened an excerpt of her internationally acclaimed, award-winning film NO! The RapeDocumentary, shared parts of her own incest and rape survivor herstory, and talked about some of the issues covered in the film. They included: rape as a community issue that reinforces interlocking systems of oppression; the role of religion in violence against women; media stereotypes about Black women; and Black men as profeminst allies in the anti-sexual violence movement. 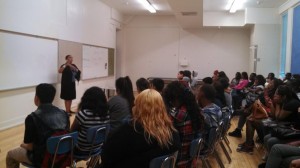 In spite of the time constraints, Hutchinson and Simmons were able to persevere with their shared vision for the late morning session, which focused on raising awareness about the prevalence of sexual violence. They created a space where students could freely ask questions and discuss topics, which are often viewed as taboo and inappropriate in an academic context. Additionally the students also had an opportunity to meet and engage with a Black feminist filmmaker and cultural worker who uses the camera lens and other cultural mediums to break deafening taboo silences and make visible the invisible.

Since 2006 WLP has been based at South L.A. high schools like Gardena and Washington Prep High School, and Duke Ellington CS. Using a humanist curriculum with a social justice lens, the goal of the program is to empower young women of color to develop their own voices, increase their self-esteem, foster healthy relationships, promote critical consciousness about and activism around race, gender, and LGBT equality, and prepare for college and careers. WLP guides young women through public advocacy projects of their own choosing, toward helping them develop and sharpen their critical thinking, writing, organizing and leadership skills. 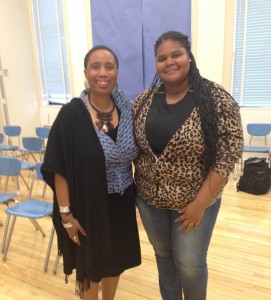 The presentation was supported by program coordinator Betty Rosenda Green and intern Jamion Allen, a 2013 graduate of Washington Prep High School. Allen, a WLP alum, was featured in  TFW’s April 19, 2013 “Feminists We Love,”  profile and is presently in her first year of college. In addition to her technical expertise, Allen played an important role in co-faciliating, with Hutchinson, the opening icebreaker, which dispelled some of the countless rape myths and misconceptions.