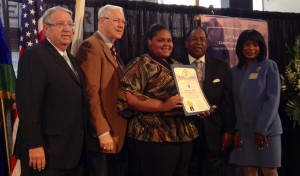 Seventeen year-old Jamion Allen is a senior at Washington Prep High School, a predominantly African American and Latino school in South Los Angeles.  Over the past two years, she has been one of the major voices in the Women’s Leadership Project (WLP), Gay/Straight Alliance and No Haters club at Washington Prep, sponsored by the L.A. County Human Relations Commission.  She and her peers in WLP just completed a series of Women’s History month presentations that focused on the cultural relevance of feminism for young women and men of color.  Throughout the discussion, few of the student participants could name contemporary or historical female of color activists, intellectuals, scientists or artists (beyond Rosa Parks).  Jamion believes that this highlights the urgent need for youth of color to feel some ownership of legacies of activism and resistance in communities of color.  On April 15th, she received a youth Volunteer of the Year award from the County of Los Angeles for her outstanding leadership teaching workshops on school climate, homophobia, sexual harassment and women’s rights.  In this interview, Jamion discusses community issues, reproductive rights, education, her life ambitions and the role the double/triple burden plays in the lives of young women of color:

What does feminism mean to you as a young woman of color growing up in South L.A.?  Feminism means the empowerment of young women, educating them, moving them forward, keeping them from getting involved in criminal activity like prostitution and being on drugs.  I see some girls getting pregnant in order to gain acceptance, be loved and stay in a relationship.  High pregnancy rates prevent girls from succeeding.  Some young women don’t have access to the care that they need like birth control or abortion. People judge you – for example, if a young girl wants to have an abortion there are so many critics, but these people aren’t going to step up and pay for the baby or give you a check every two weeks.  Also, I don’t understand how you get religion and God out of giving up a child but some people take it there.  Some girls end up having a baby and not being able to get a job.  One of my friends from middle school just had a baby and she was stealing because she couldn’t provide for her family.  Because there aren’t many options in our communities I think young women are easily targeted for rape and sexual abuse.  You can’t even walk down the street without something happening.  I read a book by Alice Sebold where she talked about being raped as a freshman in college. She was criticized even though it wasn’t her fault.  Girls are ridiculed for being attacked as though it was their fault.  For example, I’m thinking of Denim Day (which promotes global sexual assault awareness activism in April) and how girls are criticized for wearing tight clothing and bringing sexual assault on themselves.   Black girls are viewed as hos and “ratchet” because of rap videos that portray us in a sexual way. WLP is a feminist program that trains young women at my school to understand media images, how to succeed in college, and learn how to challenge issues that affect our well-being and education. I contribute my ideas and experiences on how young African-American women are treated in this community and portrayed in the media.  My involvement in WLP has helped me understand and become educated on issues that I was unaware of.  I had no idea that intimate partner violence is the leading cause of death for black women. I had no idea that black females have the highest HIV/AIDS contraction rates.

What are your ambitions in life? I want to move farther than being a stereotype of South L.A. I want to go to college, further my education and be a lawyer.  I get support from my family and the groups that I’m in like WLP.  I have a big support system that motivates me to move farther.  I have a fear of being a statistic or stereotype.  I use my voice to inspire people and explore different areas in life that would take me beyond the struggles, poverty and discrimination in my community.

Who or what inspires you to speak out and achieve? I personally just love to help people. As a child we are taught “do unto others as you would want done unto you.” This has stuck with me throughout my childhood and I will take it into adulthood. I have a passion in everything I do and hope that I can continue my work for years to come.

Where do you see yourself in five to ten years? I see myself in college. Hopefully I’ll have the necessary degrees to further my career.  I’d like to be a politician, I don’t want to just have a job, I want to have a career and make a difference in people’s lives.  I know how it feels to be down on your luck and be depressed and feel that no one is there to help you.  Ten years?  I feel that a lot of males grow up without positive male figures in their life.  If I can help them it would prevent them from selling drugs, joining a gang or killing each other.  Unfortunately in my neighborhood there aren’t a lot of after school programs that create a safer community.  Also, some kids think, oh I’m going to get shot walking around after dark, and they might not want to participate.

What are some of the major barriers to college-going at your school? Youth at my school don’t have a lot of mentors.  For example, they aren’t educated about financial aid or “first year experience” programs.  Many young people are stuck because there is no positive reinforcement or a push for them to succeed.  Certain teachers only come to school for their paycheck and when a student is being disruptive in class they put them down and say you’re not going to do anything anyway so why do you even come to school.

Do you see similarities between the lives of African American young women and Latinas (i.e., when it comes to issues like media representation, educational and job opportunities, etc.)? I hear black girls and Latinas say that they have some of the same obstacles like staying at home, cooking and cleaning, taking care of siblings, trying to make ends meet.  For Latinos who are undocumented it’s hard for their parents to find work or get benefits.  Girls may have to work to support their families.  Some might not come to school and there are stereotypes that all Latinas have multiple babies.  Some black girls only have a single parent and the parents are always at work and you have to take care of the younger siblings.  My mom is a single parent, so I help her with my brothers and sisters and sometimes it feels overwhelming.  I’ll make dinner, give them their baths and help them with homework until my mother comes home from work.  Sometimes you question whether or not you’ll meet your goals.