Op-Ed: What We Lose When We Focus Our Discussion on Jared Leto Rather than Rayon: Queer Politics and the Forgotten Heroes of the AIDS Crisis – The Feminist Wire

Home / Bodies / Op-Ed: What We Lose When We Focus Our Discussion on Jared Leto Rather than Rayon: Queer Politics and the Forgotten Heroes of the AIDS Crisis

Op-Ed: What We Lose When We Focus Our Discussion on Jared Leto Rather than Rayon: Queer Politics and the Forgotten Heroes of the AIDS Crisis

While Rayon’s death in the Dallas Buyers Club was not the stereotypical death of a tragic transgender character, it was a tragic death stereotypical of the millions of victims of the AIDS crisis that continues to plague our communities, as well as set the global political agenda in regards to health, identity, and sexuality. The recent attention to Jared Leto’s performance detracts from the heart of Rayon’s narrative, that of the forgotten victims and unassuming heroes of the AIDS crisis. Let me be clear. There is a grave need for more accurate representations of transgender characters, specifically trans women, in TV, in film, in all forms of cultural narration. And there is an even more pressing need to assure that transgender roles go to transgender actors. Our focus, however, on whether or not Leto should have played the role has had the added effect of vilifying the character of Rayon. Commentators have called Rayon everything from “a pitiful victim” to “sassy, tragic-yet-silly.”

Rayon’s story is tragic not because Rayon is tragic, but rather because our government, our medical establishment, and our wider society, whether knowingly or not, deemed the Rayons of the world—sex workers, intravenous drug users, gender variant queers—already too tragic to necessitate the kind of rapid, structured, and well funded response this kind of epidemic required. The central narrative of the film, told primarily through the character of Ron Woodroof, focuses on the highly controversial and politically polemical AZT drug trials of the late 1980s.

After the failures of phase II of the AZT trials, the randomized control trial in which Rayon is being treated and from which Ron is buying AZT, the FDA approved market release of the drug through a single manufacturer, Burroughs Wellcome. This effective monopoly allowed Burroughs Wellcome to control the supply of AZT, the only known treatment for AIDS at the time, and charge unfathomable amounts of money, making the drug virtually inaccessible for the most disenfranchised people with AIDS. Simultaneously, as is well documented in the film, research and experimental drugs being developed in other countries were not allowed in the United States. In addition to the many “buyers clubs” that came to be across the country, many of the most notable AIDS political organizations, among them ACT UP, were born in response to the inadequacies and inequalities of the FDA’s approach to AZT.  (For a spectacular documentary on ACT UP and this particular time in the AIDS crisis see How to Survive a Plague). 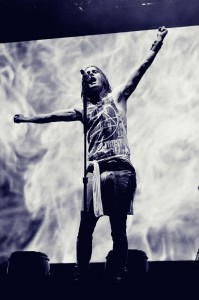 From the first days of the AIDS crisis, the community mobilization around networks of care, demands for research funding, and attempts at treatment protocols far outpaced those of established healthcare and government networks. Nancy Stoller, a scholar and prominent AIDS activist, in her book Lessons From the Damned: Queers, Whore, and Junkies Respond to AIDS, argues that it is precisely the unlikely alliances among society’s most marginalized figures—the Rayons of the world—that propelled the kind of radical politics we associate with the AIDS crisis today. This kind of radical politics not only had major effects on the shift in governmental approaches to HIV/AIDS by the early 1990s, but also radically upended the knowledge hierarchy in which doctors and government officials have the most authority and are thus able to control who and how individuals gain access to life saving medical treatments. The reversal of authority and insistence on patient knowledge created the conditions of possibility for the ever-increasing ribbon campaigns of patient empowered health politics that we know today (two of the biggest that come to mind are breast cancer and autism).  As unseeming as the relationship between Ron and Rayon appears, it is precisely these kinds of unlikely leaders who stepped forward in the darkest hours.

To be sure, critique is a motor of change and there is much to critique in this film, from Ron Woodroof’s savior narrative to the requisite heterosexual romance as the dramatic culmination of Ron and Eve’s collaboration. And yet, in a time when certain bodies are allowed to inhabit queerness in the public gaze—for example, Ellen hosting the Oscars in a tuxedo—while others continue to be policed, I am left to wonder about the space for “men in dresses.” Rather than demand a singularly authentic trans narrative, what kind of critical queer space do we open when we allow Rayon the messiness of an identity like trans feminine gay man? And in a time when Big Pharma produces more and more narcotic painkillers, an increase which has a direct correlation with our country’s current heroin epidemic, what could it mean to understand IV drug use not as a tragic character flaw but as a coping mechanism for myriad tragedies and traumas that mark certain lives as unworthy of social dignity? Rather than demand that our queer characters maintain a pre-determined respectability, what could it mean to witness the violences and inequities of a capitalist driven healthcare system?

We can, and should, hold Jared Leto accountable to his self-appointed position of representation of trans communities and trans experiences. But we need to hold ourselves accountable to Rayon. Although the character of Rayon may be entirely fictional, the portrayal is a tribute to the real people who persist in a world that deems queerness, gender deviance, drug use, and sex work undeserving of dignity and respect. The tragedy is not how these lives are lived, the tragedy is how quick we are to dismiss them or forget them. I’ve found in Rayon my very own queer hero.

Mairead Sullivan is a Doctoral Candidate and Arts and Sciences Graduate Fellow in the Department of Women’s, Gender, and Sexuality Studies at Emory University. Mairead’s research explores the politics of gender and sexuality in the histories of feminist and queer thought. An avid feminist and ardent queer, Mairead believes that marriage should be privatized, health care should be socialized, and just about everything should be decriminalized.

Related ItemsDallas Buyers ClubHIV/AIDSJared LetoOscars
← Previous Story A Review of “Undoing Border Imperialism”
Next Story → Personal is Political: To My BlackTransSistas: A letter of Healing, Reconciliation, and Love