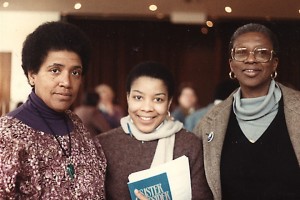 Audre was the first black lesbian feminist that I saw in the flesh. I had discovered her several years before in a black feminist magazine called Azalea. My daughter and niece were in the next room. I remember yelling and immediately clapping my hand over my mouth because I didn’t want to wake them up. But here was this discovery!  So after that I kept looking for her in all the women’s journals.  She inspired me to know that I could leave this whole totally heterosexual trap surrounded by all of the stuff. I wanted to leave and I looked at her and said, “She is out here by herself.” It felt like she was coming out over and over again, all over the place and I said, “She’s got to have help. She’s got to have an army.”

I was living in Connecticut isolated from other black feminists and I was reading what she had to say about black feminism and the black experience. Her rage, the beauty of her language and the fierceness of her poetry was astounding. She would tackle any subject;  she would just go wading in.  I saw her as this  brave warrior woman. I mean she would take on anybody.  She would go into the pages of the black scholar and castigate sexist black men. She’d go into feminist publications and try to really talk to racist white women who didn’t want to hear. She dealt with motherhood, and global politics; and I feel that she let me right out into the world, the larger world, the political world I wanted to be in. She gave me permission to leave a pretty comfortable existence. 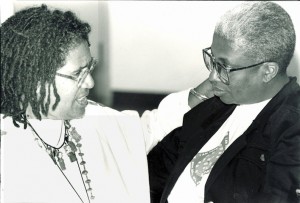 I went to see her speak in a restaurant and I remember her saying in that powerful way that she has: “What are the silences that you live with day by day and you may be afraid to speak, and if you don’t speak you will end up sending messages back from the grave or messages back on little ouija board?” It was wonderful. She challenged us to say what you need to say, say it now, say it while you can whether you’re afraid or not.  And she gave me permission to come out, to live out and be the woman I am today.  She had been out there for 20-25 years by the time I started reading her and I just couldn’t believe how much she had done, how brave she was. She was out there with a siren call beckoning, saying, “Come on out. It is fine out here.” And it is. It is wonderful out here and I thank Audre Lorde for being there for me. 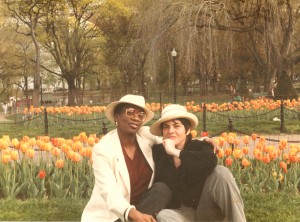 Jennifer Abod is an American award-winning broadcaster and audio and video producer.  She produced and directed the award-winning documentary, The Edge of Each Others Battles: The Vision of Audre Lorde.

She is presently completing the feature length documentary, The Passionate Pursuits of Angela Bowen.

She holds a Ph.D. in Intercultural Media Education and Women’s Studies and was part of the dawning of the second wave of feminism in the U.S.