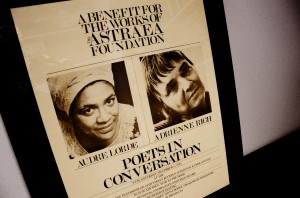 There is a framed poster of Audre Lorde and Adrienne Rich in my office.

It is a poster for a fundraiser they headlined in 1981.  Tickets were $6.50, sliding scale for students, the unemployed and those on fixed income.  I am only the second Executive Director of the Astraea Lesbian Foundation for Justice.

I have taken a seat inside of an institution their fire helped create/demand/architect.

Astraea was born in 1977 out of the radical belief that self-determination deserved to be resourced/funded/fueled.

Today, Astraea is one of the largest funders of LGBTQI activism in the world.  We still raise all of the money we reinvest.  We still fund nascent and emerging groups.   Standing strongly on our lesbian feminist roots, we understand this to be a present-tense ethos demanding, still, the most radical possibility for us all.

No matter where I stand in my office, Audre’s gaze follows.  I’m often in conversation, look up and wonder what she would say or do in the same circumstance.   Likewise, I project myself back and wonder who I would have been then as an adult.   I think I foolishly have not properly held the value of desire as impetus to politically act.  The love required to believe so purposefully in your own self, in your own people, in your chosen tribe, astounds me.  I can barely fathom what it must have meant to take the first steps toward each other.

Why I haven’t written sooner.

This is the thing.  I have been stuck.  I have been stuck on reverence and presupposition and need.  Because I need to talk all the big things thru w you, I need to know you’re watching/guiding/believing in the direction course risk-path we (I) I am taking.  That it’s worthy and righteous and possible even if goddess knows it may not be probable.  I think of you holding court w all the new arrivals and wonder how “new” gets qualified there.  Octavia.  I wanna know if she talks to you about what she knew was coming.  Are you the ones letting us believe fiction speculated can in fact urge the arrival of possibilities not probable but fantastic?   Stuart.  Jose.  Pete.  That’s just this month.  Are y’all taking about how there goes the neighborhood or were you steady ready making room bc we needed more push there for here?  Are you and A.B. getting along, spinning webs of verse, or is there a huffy period?   We. I. am feeling older.  Feeling frontline-ish.  Feeling clear the tide is turning and we are supposed to be taking our lessons and leading.   Purpose.   I have been stuck.  You have surely already known.  I have not asked you what I want to know. 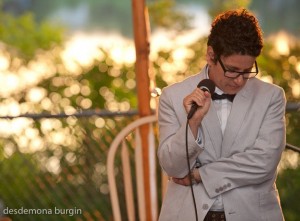 J. Bob Alotta is a  Filmmaker, media-activist and technologist turned Executive Director of the Astraea Lesbian Foundation for Justice.  Astraea was founded in 1977 in order to address the lack of funding for lesbians and women of color.  Today, Astraea is one of the most imperative LGBTQI rights foundations working for social, racial, gender, and economic justice around the globe. Through film, food (!) and at Astraea, Bob engages everyone as if liberation, pleasure and profound happiness is not only possible but probable. She was named The Feminist Wire’s “Feminist We Love” on Friday, June 27, 2014, which was the 44th anniversary weekend of the her/historic Stonewall Rebellion in New York City.