Audre Lorde (from the documentary, “A LITANY FOR SURVIVAL”)

Consider this a love note never sent, Audre, for that brief, clairvoyant moment you publicly danced with me or the afternoon you showed up unannounced at my door on a not-so-happy Birthday, shapeshifting blues to celebration.  It was an alchemy you had: igniting audacity in others.

And you walked the talk – the hard, hard labor of altering invisibility into affirmation one sonnet, one march, one classroom, one homophobic showdown, one cancer treatment, one literary accolade at a time.  To live to tell the tale, you wrote, was survival.

In these global times, academics, bureaucrats, progressives, even Hollywood screenwriters, chisel quotes from your work like talismans of political correctness.  The zen of Audre Lorde is in vogue.  But the tangible impact of your activism will keep surfacing internationally and for generations to come as long as communities of color are still under siege, as long as a woman remains voiceless and abused, as long as the lesbian love that dared “speak its name”  is threatened with sequester.

Consider this love note a chain letter to Audre Lorde.  Pass it on… 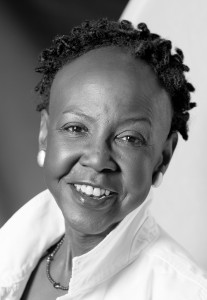 Writer, filmmaker, university professor and performance artist, Michelle Parkerson is from Washington, DC.  Among her award-winning films are Gotta Make This Journey: Sweet Honey in the Rock, But Then, She’s Betty Carter and A Litany For Survival: The Life and Work of Audre Lorde  (with Co-Director Ada Gay Griffin).

In spring 2013, Scribe Video Center held a retrospective of her film work. In 2007, she received a Black Lily Film and Music Festival Living Legend Award. Michelle is also an alumna of the American Film Institute’s Directing Workshop for Women (8th Cycle) in Los Angeles.

Michelle Parkerson is the author of “Waiting Rooms” (Common Ground Press), her first book of poetry and short fiction.  Her work has appeared in several anthologies of Black and LGBT literature over the years – most recently, “Full Moon on K Street” (Plan B Publishing), a poetry collection about Washington , DC from 1950 to the present, and “Where My Girls At?” (BlackLight Press).

Parkerson has served on the faculties of Northwestern University, Howard University, the University of Delaware and Temple University’s Department of Film and Media Arts in Philadelphia, PA.  As Founder and CEO of the Washington-based production company, Eye of the Storm  Productions, she has lectured nationally on film and cultural activism.