Op-Ed: A Difficult Solidarity with Saudi Women – The Feminist Wire

A Huffington Post headline last month read: “Rotana Tarabzouni’s Lorde Cover Will Make You Stand In Unity With Saudi Arabia’s Women (Video).” Covering pop-singer Lorde’s song “Team,” Rotana Tarabzouni, a Californian college student from Saudi Arabia, raised her voice in support of the October 26th nationwide movement against the ban on women driving in the country.  In one lyric of her cover, Tarabzouni sings: “We live in cities you’ll never see on screen, not very pretty, but we sure know how to drive free.”

Calls of solidarity with Saudi women, like the Huffington Post headline above, are rampant in mainstream media. Saudi women are applauded for their bravery and courage.  In this moment, the media acknowledged that the nationwide protest in Saudi Arabia was incremental in the larger struggle for women’s autonomy in the country.

Glossed over in the media frenzy was the forgotten mass of foreign-national domestic workers, a large portion of whom are women who toil in Saudi Arabia under no labour protection law, face the country’s internationally condemned death penalty and according to a report by Amnesty International, are at a “particular risk of sexual violence and other abuses.”

Forming one third of the country’s population, domestic workers are hired mainly from developing countries in Asia and Africa, with large scores of workers coming from the Philippines and Sri Lanka. It is astonishing, then, that such a large portion of women are so commonly be excluded from discussions about women’s rights in the country.

The numbers are not insignificant. For example, while Saudi women are not allowed to leave their homes to work, especially in non- gender segregated environments, an underclass of migrant women fill this “void,” joining the workforce to perform the most menial of tasks.  In a 2010 report entitled: Women’s Employment in Saudi Arabia: A Major Challenge, women’s employment in Saudi Arabia is put at 15%–one of the lowest percentages in the world, especially among Saudi Arabia’s neighbours.  However, the report highlights that; “In 2007, the active workforce in Saudi Arabia comprised of 8.2 million people, fewer than half of whom were Saudi nationals.” Similarly, in a paper entitled “Women and education in Saudi Arabia: Challenges and achievements,” Amani Hamdan explains that women constituted 7% of the workforce in 1990 and 4% in 2003 — in part this is because 4.6 million residents were foreign workers.

In an oil-rich society directly structured around lineage, wealth and privilege, it is an unfortunate reality that Saudi women live in a world apart from their domestic workers.  A recent report from Amnesty International entitled: “Unfulfilled Promises” (October-November 2013) outlines the abuses that foreign-national domestic workers face in the country, which include: “long working hours, non-payment of salaries, refusal of permission to return home after completing contracts, refusal to transfer sponsorship and withholding of passports.”

Despite calls from international human and labour rights organizations, there is no labour law in the country for domestic workers. Laws do not allow migrants to leave their employers, or even the country without signed permission from the employer. Contracts are written in Arabic—a language foreign to the migrant labourers coming from places like the Philippines and Sri Lanka.

And as Saudi women receive international admiration for their courage and bravery in standing up to a system of patriarchy in their society, it’s important to understand how Saudi women, themselves, are complicit in a system of exploitation against women.

An incident in Orange County, California earlier this year brought the issue of abuse against domestic workers in Saudi Arabia into international focus. In July, a 30-year old Kenyan woman flagged down a bus near a luxury condominium in Orange County, holding a suitcase and a US State Department pamphlet.

Shortly afterward, Saudi princess, Meshael Alayban, 42, was arrested by police in Orange County for human trafficking, accursed of holding the Kenyan woman against her will.  Alayban is one of several wives of Abdulrahman bin Nasser bin Abdulaziz al Saud, the grandson of King Abdullah of Saudi Arabia

A California judge set Alayban’s bail at 5 million dollars, requiring the princess to wear a tracking device and prohibiting her from leaving the country without authorization.

The Kenyan woman was hired in Saudi Arabia as a domestic servant in 2012. She had her passport taken away from her upon landing in Saudi Arabia, only to be returned temporarily when immigrating to the United States.

According to prosecutors, her original contract stipulated that she would be paid $1,600 dollars a month to work 8 hours a day. Alayban allegedly only paid the maid $220 dollars and made her work 16 hours per day, forcing her to cook, clean and complete other chores. Four other women, who also worked as maids, were found in the condo. On September 20, prosecutors dropped all charges against Alayban as they were unable to corroborate the charges of human trafficking against the princess.

Apart from workplace exploitation, an astonishing number of domestic workers are currently serving the death penalty– their cases carefully monitored by human rights organizations like Amnesty International.  Saudi Arabia has one of the highest execution rates in the world and according to the Amnesty International report, since 2011 there has been a sharp increase of executions in the country. In 2011, at least 82 executions took place – more than 3 times the figure of 27 in 2010

According to data compiled by the human rights organization, “out of at least 1,938 people executed by Saudi Arabia between 1985 and 2012, at least 954 were foreign nationals, mostly workers from Asia and Africa.”

On January 9 2013, Rizana Nafeek, a Sri Lankan domestic worker, was beheaded for allegedly killing an infant in her care in 2005. According to Amnesty International, Rizana was not given access to a lawyer during her pre-trial interrogation during her trial, was forced to “make a confession under duress” and received inadequate defense because of language. And as a signatory to the Convention on the Rights of the Child (CRC), Saudi Arabia is prohibited from executing offenders under 18 years of age, yet reports reveal Rizana to have been born in 1988. 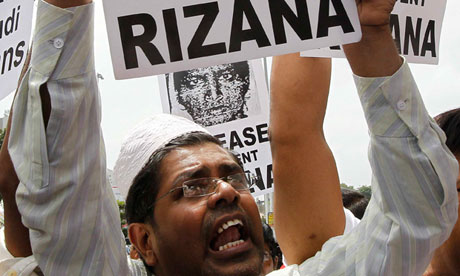 These factors did not thwart her death sentence.  Nor did the Sri Lankan President’s plea for clemency. There was a moment of silence in Sri Lanka’s parliament when news of Rizana’s execution reached her home country.

The details of abuse faced by domestic workers are harrowing. The Amnesty report describes a situation when“ in 2011, L P Ariyawathie, a Sri Lankan employed as a domestic worker, was found to have 24 nails and a needle driven into her hands, leg and forehead when she returned to Sri Lanka. She said injuries had been inflicted by her employer when she complained about her heavy workload.”

Exploitation of domestic workers in Gulf States, like Saudi Arabia, has received wide-scale scorn for being a modern-day form of slavery.  It is, then, under this context that the recent women’s movement in Saudi Arabia must be understood. Previous women’s movements have shown that advocacy must stretch across race and class lines. An in-depth look at the issue complicates the congratulatory and easy calls for solidarity with Saudi Arabia’s women, especially when such a large portion of women toiling in the country are the most vulnerable to exploitation and also, the most commonly excluded.

Sana Hashmi is a writer based in Toronto, Canada.