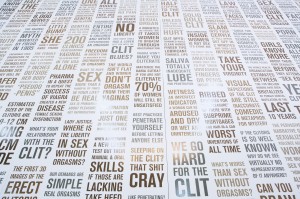 As an artist, my job is to explore an idea aesthetically and then share my work with the public. In this light, it is my expectation that audiences will engage with CLITERACY in their own contexts. Yet some of the contexts that have been projected onto CLITERACY are then written about as fact. While I appreciate critique, I do worry the point of the CLITERACY project is in danger of being misrepresented and grossly misunderstood. I’m grateful for the opportunity through The Feminist Wire to clarify my intentions in creating this conceptual work of art.

CLITERACY, 100 NATURAL LAWS is a project concerned with citizenship and body sovereignty through the medium of text-based objects, unauthorized street installation and interactive sculptural forms. In this work, I intentionally focus on female genitals. They are the means – often the site itself – by which women (and feminized bodies) are subjugated – legally, symbolically and literally. In order to dismantle the taboos associated with female and feminized genitals, I must first reveal these taboos in all of their illogical baselessness. It would be nearly impossible to demonstrate that the clitoris has not been assailed in myriad ways. This continues in the present day. Within this context, the project is ambitious in and of itself. Evidence of this fact is that CLITERACY continues to experience censorship. 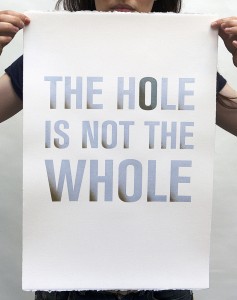 I did not attempt to cover all the ground of my politics with regards to gender, race, sexuality, ability and class with CLITERACY. For those interested to learn more about my work, I invite you to look at my practice over the last 13 years. The clitoris and the vulva, as sites of subjugation, were my focus with CLITERACY. Is it, as some have claimed, cissexist and transmisogynist to create a project that focuses on the clitoris and the vulva? I find this argument troubling.

Some women have vulvas and clits and some don’t. Some men have clits. CLITERACY is not demarcating who can claim which genitals. Rather CLITERACY is a conceptual work of art, not a representational project. It does not offer answers that are definitive or final. In fact, the last law of CLITERACY is “There are more laws.” The work is not closed; instead, it continues and further, invites viewers to contribute.

In a piece published in The Feminist Wire, Kelley Rose Pflug-Back argues that CLITERACY  is concerned with sexual “gratification” for women, and that, as such, it is a “superficial and reductionist critique.” Finally, she takes aim, again without evidence, at my personal biography, politics and conceptual goals for creating CLITERACY.

So then, what is CLITERACY about if not “sexual gratification?”

CLITERACY’s focus on the body is not merely to “embrace sex positivity,” although I’m pleased if that is the effect for some viewers. I believe that no one should be shamed for a fundamental part of their humanity. The project’s aim is much larger. It seeks to liberate female, feminized and pathologized bodies from being denied citizenship by having the language of those bodies continuing to function as the intractable site of shame. Signifiers of language that locates shame in the female or feminized genitals can be observed in common profanity such as “pussy”, “cunt”, “whore”, “faggot”, and “twat” among others. It can further be seen in epithets that suggest that being on the receptive side of penetration takes away from one’s humanity with words like “fucker,” “cock-sucker,” “slut,” “hooker,” and “tramp”.

Perhaps we can at least agree on many of the effects of this shame on female and feminized bodies. We can see such effects in the near universal self-blame by survivors that often accompanies victimization. Depression, self-destructive behavior, struggles with intimacy, drug and alcohol abuse, and suicide are some of the many consequences of this shame. We see further evidence in the vitriol directed at victims by society at large. On an institutional level, the assumption that survivors of sexual violence are culpable can be seen in their treatment by authorities and the lack of meaningful consequences for the vast majority of sexual predators. 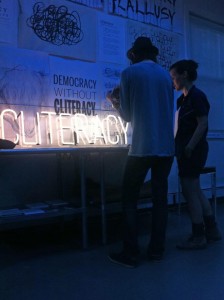 Equally significant, we can see the effectiveness of misogyny located in the body, in the absence of women, trans and queer subjects holding positions of power globally. We see it in language that locates disease in female bodies with terms like “venereal disease.” Though outdated, the term venereal disease as the term for a broad range of sexually transmitted infections, fallaciously insinuates the vagina as the source of STIs. We see this in legal language which almost exclusively treats the male body as the neutral body, arguing for example that all men are created equal, while enacting laws and cultural mores that treat women as far from equal under the law. For example, it is taken for granted, that it is illegal for a woman to be topless in most U.S. cities, even to breastfeed. Regardless of breast size, men can be topless in every state.

CLITERACY works against legal stigmatizations of the female body such as the one illustrated in 2012, when Representative Lisa Brown was banned from the Senate floor for saying the word “vagina” in a debate on abortion legislation. In her defense, Brown stated: “If they are going to legislate my anatomy, I see no reason why I cannot mention it.” Yet the House Speaker insisted that Brown was not being reprimanded because of the word, but rather because of the context, which he said was “inappropriate” and moreover “disrupting decorum” in the debate over abortion.

But it’s not just about civic silencing and violence. Pleasure is an equally important indicator of freedom. Perhaps this is the most radical position within CLITERACY. Nevertheless, the project argues that access to pleasure is a fundamental right of all human beings. To be truly free, one must have sovereignty over the totality of one’s body, and pleasure is a part of this. It is a sad fact that many women have been sexually active their entire adult lives, given birth to children yet have never experienced an orgasm. Though few have thought to study orgasms in women, new research suggests that there are significant disparities in orgasms between men and women when they have sex together (Wade, Lisa: “The Orgasm Gap.” ). One study found that American college age women have one orgasm for every three a man has in heterosexual sex.

Are orgasms, in and of themselves, the point? Of course not. They are rather a useful reflection of the state of freedom women have achieved in 2013.

There is an elephant in the room. And that elephant is that there is pervasive ignorance about the mechanics of female born genitals. It is an ignorance that nurtures oppositional sexism, hierarchy and domination, which further normalizes violence on female and feminized bodies. CLITERACY attempts to create a new space for all people to be respected in and have autonomy over their own bodies.

Sophia Wallace is an American conceptual artist and photographer. Through the use of images, video and mixed media, she explores how otherness is constructed visually on the gendered, sexualized, racialized body. Wallace has presented her work in major exhibitions in the U.S. and abroad, including Kunsthalle Wien Museum, Art Basel Miami, Scope NY, Taschen Gallery and Aperture Gallery among others. She was awarded PDN’s Curator Award, Critic’s Pick by the Griffin Museum, American Photography AP-25 and ArtSlant’s Showcase Award. Wallace holds a BA from Smith College and an MA in Photography from NYU and the International Center of Photography. In 2012, she was a Van Lier Fellow. Recent residencies include the Art Law Residency, Wassaic Residency and the Artist Lab Residency at CENTER. Find her at www.sophiawallace.com

Related ItemsActivismArtbody politicsCulturePoliticsSexuality
← Previous Story COLLEGE FEMINISMS: A Letter To All Women Who Have Been Told To Quieten Down, Speak Softer and Be Less Angry
Next Story → Op-Ed: A Difficult Solidarity with Saudi Women