Every 9 seconds; a phrase learned from watching several Lifetime Television movies when I was younger. Following a Lifetime movie centered on domestic abuse, a commercial would play relaying the statistic that every nine seconds a woman is assaulted or beaten by her partner. Lifetime was effective in informing me about domestic abuse and its manifestation not only in physical treatment of a partner but psychological and emotional treatment. But the network, as well as nearly every media outlet, was also successful in instilling one unfaltering image of domestic violence. The perpetrator was always male and the victim, female. And yet, domestic violence within the LGBTQ community occurs at a rate similar to that of heterosexual domestic violence. In 2012, there were 2,679 LGBTQ domestic violence situations reported to the National Coalition of Anti Violence Programs.

Lenore Walker’s “Cycle of Violence Theory” suggests that domestic violence occurs in a cycle: tension, violence incident, and the honeymoon phase. But keep in mind, abuse tactics vary and are also verbal, emotional, economical, sexual, and psychological. Two forms of psychological abuse that are more exclusive to the homosexual community is the threat of “outing” a partner or flaunting legal rights to a child. Dr. Walker believes a cognitive change is vital to reducing the rate of domestic abuse in society and that change is the discontinuation of sex role stereotyping. In other words, we must no longer associate certain characteristics and behaviors with a person on the basis of their sex. If Lenore Walker’s suggestion were to come to fruition, society would also no longer psychologically confine domestic violence to the heterosexual community.

Director of NO! The Rape Documentary, Aishah Shahidah Simmons, has studied sexual violence in the African-American community and also sees these sex role stereotypes as one of the hindrances to understanding the presence and scope of domestic violence in the LGBTQ community. “I think that the lack of knowledge that there is about queer communities is just a commentary on complete ignorance, as in lack of knowledge about relationships and power and control. I think that we are so trained to see men as perpetrators and violators and women as victims… So I think that in addition to homophobia and heterosexism, it’s complicated and it forces people to have to really look at all the nuances.”

As Simmons said, we must look at the nuances. It’s so easy to generalize when confronted with issues we have not had to personally deal with, but this tendency to generalize is the reason for a number of societal issues. Racism, sexism, and homophobia are based on society’s need to categorize others by easily identifiable characteristics such as their skin tone, their sex, and their sexual orientation. We base our opinions on our sensory perceptions and proceed to apply stereotypes. If you are breathing, you have been socialized; meaning you ascribe to gender norms, hold a certain standard of beauty or try to abide by it, attribute certain behaviors to a person’s race or at some point, have based your worth on what society has indirectly communicated it should be. When you think of the term domestic violence, you likely think of a male physically harming his female partner. You only think of the people the media has told you to care about; a white heterosexual couple. You are probably not envisioning a gay couple, and it’s even less likely that you are envisioning a gay couple of color. But according to the LGBT Intimate Partner Violence Report, people of color are among the demographic most likely to be affected by domestic violence. It’s also important to keep in mind that domestic abuse is not always something that can be seen or heard, as it can take the form of psychological or emotional abuse.

The season one finale of the popular Showtime series, The L Word, sloppily handled a scene portraying domestic violence, but showed no interest in exploring the subject as a serious matter beyond this scene; whereas the YouTube series about African-American lesbians titled Between Women incorporated the issue throughout a season-long storyline. In this plotline, one of the characters, Allison, had previously been assaulted by her partner, Brooke, and tried to remain by her side as she went through counseling. But while Allison remained with Brooke, she had a dream that she was beaten to death by Brooke the day she tried to leave her. Allison’s dream represents a very alarming but possible outcome of a domestic violence situation. In 2012, twenty-one domestic violence situations resulted in homicide.

While I laud Between Women for including same sex domestic violence in the series, each show only has an average of about 450,000 hits and is a web series. The L Word aired on a premium channel and needless to say, attracted a much larger audience, which was partly comprised of heterosexual males, for obvious reasons. LGBT Columnist for The Temple News, Sara Patterson, believes that mainstream LGBT shows neglect to thoroughly address domestic violence because knowledge of the issue may be used as justification to continue to marginalize the LGBT community.

Escapism goes beyond television preferences and is the reason for the continuation of numerous societal issues. No matter what class, race, or gender we belong to, there will always be some subject(s) that cause us to uncomfortably shift in our seats. Inability to relate is not an excuse to dismiss any issue. The likelihood of change occurring increases when those that haven’t been victimized or oppressed decide to speak for those that have been.

While television shows may intend to provide viewers with a haven from reality, the news media is supposed to do exactly the opposite; so why do media outlets continue to fall short in properly conveying that domestic violence is not an issue faced only be heterosexuals? While there are many factors attributing to the ignorance and stigma concerning LGBT domestic violence, the media does play a significant role in public knowledge. Yet, heterosexual domestic violence seems to only be made relevant when it affects celebrities.

When bombarded with incessant coverage of celebrity pregnancies and their wardrobe choices, it becomes difficult to determine whether incidents such as the domestic violence dispute between Rihanna and Chris Brown received attention for sensationalist purposes or the magnitude of the incident alone. The media is responsible for establishing the public agenda and while 509,230 people in 2010 were affected by domestic violence, the year after the pop star became a victim of then boyfriend Chris Brown’s sexual assault, my only remembrance of domestic violence being in the news between those times is when it affected the “We Found Love” singer. In the year prior to this assault, 3,419 people within the LGBT community reported incidents of domestic violence. In no way do I intend to antagonize Rihanna, but this incident serves as an example of the faulty priorities of the media. Rather than using the domestic violence occurrence between a celebrity couple to incite public interest and investigation on domestic violence, they chose to follow the actions of Chris Brown and Rihanna after the incident, such as the rekindling of their romance and his trial. The only lesson I learned from the Rihanna and Chris Brown coverage was that when the media does focus on domestic abuse, it’s for all of the wrong reasons.

We can’t wait around for mainstream media to communally decide LGBT domestic violence is a topic the public should begin concerning themselves with; we have to create ways to draw attention to this issue ourselves. The more people are enlightened on the occurrence of LGBT domestic violence, the more support systems will be created. We are all capable of helping to make the LGBT community feel less marginalized.

It is upon us to realize the society that exists beyond that which the media portrays and that which is in our immediate surroundings. As a nation, we are slowly becoming more accepting of the LGBT community. But acceptance isn’t being comfortable with gay friends only when they are of the opposite sex or finding Modern Family to meet your entertainment standards on a weeknight. It is being assertive in the idea that a person who is gay, a lesbian, bisexual, or transgender is deserving of the same rights that you are.

Aishah Shahidah Simmons, for more information on the director and her documentary, visit http://notherapedocumentary.org/ 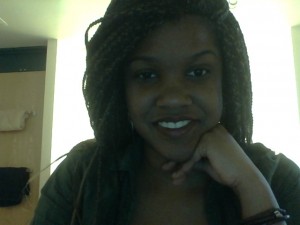 Zahara Hill is a sophomore majoring in journalism at Temple University in Philadelphia, Pennsylvania. She works as an Editorial Assistant at The Pennsylvania Prison Society where she corresponds with inmates and writes articles for their newsletter, Graterfriends. She has also written for Her Campus Temple, Temple University’s branch of an online magazine for college women. Zahara aspires to be a writer for a well-known national publication such as The New York Times or TIME Magazine, where she wants to report on the treatment of women as second-class citizens in theocratic countries with the intention of inciting change. All too conscious of the detrimental impact of gender roles, she is extremely passionate about writing on women’s issues.