Fact of a Flat

Tire’s rim against rubber against

its warped wheel, and nothing

to do but lift the thing

from its stupor. Silver nail head

utility lost in one long exhale.

Separate nuts from bolts. After

the shriveled limb from its joint –

trade for the spare’s wobbly fit.

Get out while the chance is there.

So Many Ways to Snap Out of It

After So Many Ways to Sleep Badly

I know of the nightmare because sheets were tied around each bent joint, saws covered in lube working at my bones and Rock Lobster playing in the background. Left Doctor saying, hurry it’s nearly too late! and Right Doctor  uncorks a bottle of vodka with her teeth, douses the red fountains. I’ve washed my dream catcher in lavender and sage to no effect — it’s too much, too sticky like chewing taffy dropped in the ocean’s surf, the cameras rolling – Look sad and unstoppably determined! A little more! Pageant! Bed sheets full of sand, a bottle, the message: Want to come over and be my slut? I’d spread my legs, but in this dream I can’t feel them. How to become a legend, my dear? Furnish the vanity with a spittoon, write down every quarrelsome wish, chew, spit. Floating already, but I end up burying it and blowing a kiss that wanders off. Is anything else so gentle? Sand in bed gives me red razor bumps, but I’ve never felt so soft and lovely. This is the legend, my dear. It’s work, the grinding, and for a moment I’m disappointed, dig out the spittoon and chew. A wonder to still have this mouth, the sucking and chewing. A process, my dear, the legend is in the sparkling lougie, that tiny world of ground down hurt. Another bottled message asking the same thing. I’ve done it before, start purring. Open mouth oh as in ocean, the waves conducted at lunar whim, swollen, shallow, ragged rush. I’m naked, but someone yells, keep going! So I’m at it again, peeling off my hair, follicle by follicle, then my toes, flicking off each nail, snap skin up from musculature like an old front hall rug and its all nerve endings out. Pose. Nobody says anything. Were they watching anyway? Too late, chew and spit into the wind. I yell, Bitches can you hear me?! They just snap. Pageant!

Gloria Talks Back To Patti Smith

To walk up the stairs, through the door,

I climbed with lactic legs and heaving chest.

Before I became your muse

I was my own, slowly stitching

a disparate body together,

retelling the story of how

the Pine Barrens only grow by

setting fire to their body.

to reach and open upon reflection.

Red needles over the sandy soil.

I told myself this story at

the precipice of choosing,

glory burnt across my heart.

I walked up the stairs. Your jagged howl:

but who is that singing?

Lilith Latini is a queer trans Jersey girl currently lingering in the Blue Ridge Mountains. Her poems have appeared in Troubling the Line: Anthology of Trans and Genderqueer Poetry and Poetics and her recently self-published chapbook, Lip Print. 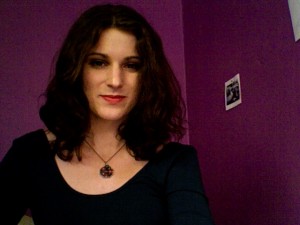