In January of 2008, I found myself threading my way out of the crowded living room of a friend’s Brooklyn apartment, where forty or so people were milling about and socializing, paper cups of beer or wine in hand. But all of that receded into the background, as my face and ears burned from a conversation that I had just walked away from.

About half an hour earlier, I was introduced to a friend of the host and we started talking and quickly learned that we were both graduates of women’s colleges, which were part of the “Seven Sisters” network. She, let’s call her Megan, was white, and since graduating had become a corporate attorney and had worked to climb the steep ladder in her field. I, meanwhile, had taken a winding path from city government through the foundation and nonprofit sectors, rising up the ranks along the way. We compared notes on life at women’s colleges and talked about what imprint our education at these institutions had made on our lives. She was dating a South Asian guy, and as I am South Asian American, we ended up talking about some of the most consumable aspects of South Asian culture – food and Bollywood movies.

But given that it was early in the year of what was sure to be a landmark Presidential election, unsurprisingly, our talk quickly turned to that. The Democratic primaries were mere months away and the frontrunners were Senators Hillary Clinton and Barack Obama. Our conversation went something like this:

“I can’t wait ‘til George W. Bush is no longer our President. It’s been eight long years!” Megan said.

“Amen to that,” I exclaimed as we silently clinked together our paper cups. “Isn’t it amazing to have both a woman and a black candidate in the Presidential primaries? I wasn’t sure it would happen in my lifetime.”

“Absolutely. But coming from Seven Sisters schools, we know the obvious choice is Hillary. She’s a smart woman with a lot more experience,” she said putting particular emphasis on the word “obvious.”

“I haven’t made up my mind. I’m still assessing them both, trying to understand where they stand on key issues. I’m finding that it’s not always clear what their positions are and I feel like that’s deliberate,” I said, trying to refocus our conversation on the candidates’ positions on major issues rather than their gender and race profiles.

“Well, that’s politics for you! But I definitely think it’s important, given our history, for us to have a female President!” she said, restating her previous premise, this time in a more insistent tone, one that communicated that her choice was the obvious and only choice and that it was high time I accepted it and got with the program.

“Well, I’m sure many people think, given our history, that it’s important to have a black President,” I said, hoping that she would at least acknowledge that there were similarly compelling reasons why many people would choose Obama.

“Perhaps, but at this moment in our country, it is definitely more important for us to have a female President,” she declared with finality.

In that instant, I felt a large chasm appear between myself and Megan, who I had identified with on several levels just moments earlier. A sense of déjà vu and mild panic washed over me as I realized that Megan’s tone was the same one I had encountered in conversations with friends and colleagues, who turned out to be evangelical Christians on a mission to save my soul by getting me to play for Team Jesus.

As much as I wanted to admonish her for presuming that she had some unique and exclusive privilege to speak for all feminists, I also wanted to walk away because I suddenly felt tired, despite the buzz of celebration all around me. I realized that for the remainder of the Presidential primaries, I could look forward to having this same conversation-cum-debate, over and over again, trying to parse out if progress for women is more important than progress for people of color. This debate often left women of color, like me, feeling either squeezed by both sides or left out altogether. I resisted, at least initially, the impulse to walk away. Instead, I decided to push her on her point by simply asking her “why?’

In an unapologetic, matter-of-fact manner that betrayed a total lack of awareness of the offensiveness of her previous statement, she gushed about how there were more women in this country than any specific minority group so a female candidate was more representative and therefore would have a greater base of votes and power. But she also sought to reassure me that once a female was elected president, it would open the door, eventually, to other “types” of candidates down the line, so perhaps Obama could viably succeed Hillary in eight years. There was so much I wanted to say but I reminded myself that this woman was a friend of my host. So, I responded as unsarcastically as I could manage, “That’s a unique perspective. It’ll be interesting to see how the primaries play out.”

She continued to talk, furthering her case for Hillary but I had stopped listening. I felt like I just wanted to blink and have the Democratic primaries behind us. At that moment, I don’t think I even cared as much who ended up winning because I was focused on the futility and frustration that pitted one vulnerable group against another, sometimes jokingly referred to as the “Oppression Olympics,” where the grand prize is a medal made of pyrite. As heartening as it was to have both a female and a black Presidential primary candidate, this huge leap forward actually surfaced wounds from several decades ago when divisions sprung up between the Women’s and Black Suffragist Movements. In the debates of those times there was a strain of logic similar to the one articulated by Megan.

“Excuse me while I get a refill,” I blurted, interrupting her in mid-speech. And I turned to make my way through the maze of people, only then noticing that my glass of white wine was still two-thirds full. Although it’s unlikely, I hoped she noticed, too.

More than five years have passed since that conversation. President Obama has not quite measured up to Candidate Obama, in many people’s estimation. Obama and Clinton, previous political adversaries, joined forces when Obama appointed Hillary Clinton as his Secretary of State. And while the crux of the debate that pitted Clinton against Obama based on their gender and race profiles has faded with time, I’ve been struck by how it’s reared its head in strange and unexpected ways. For example, a group of white feminists bemoaned that, as a powerful black female, Michelle Obama stated that her main mission as First Lady was serving as “Mom-in-Chief,” and criticized her for taking on what they saw as a meek issue: childhood obesity and access to fresh and healthy foods. They pointed to Hillary as the model progressive First Lady and chided Michelle for not only not picking up the baton, but rather setting the office of the First Lady back a few steps.

Now, the media is busy speculating whether Hillary will run for President in 2016, giving us the chance to once again envision a female President. If Clinton does throw her hat in the ring, there will be lots of campaigning, as there was in 2008, and I, for one, am excited to see what a truly inclusive “Hillary for President 2016” campaign can look and sound like. But for me, it will ultimately come down to the issues; it always has. 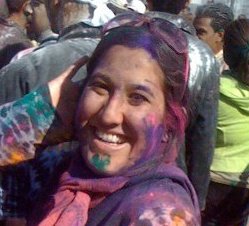 After 15 years developing and leading innovative programs in the social change sector, Kavita Das now writes nonfiction and creative nonfiction and serves as a nonprofit consultant. Her work has been published in Quartz, The Aerogram, The Rumpus, Colorlines, Thought Catalog, DashAmerican, The Sun, and will be featured in an upcoming anthology by Telling Our Stories. Connect with Kavita on Twitter @kavitamix.

Related ItemsBarack ObamaHillary ClintonHillary Clinton in 2016
← Previous Story “Christopher Columbus was awful (but this other guy was not)”: A Flawed Critique of Columbus Day that Omits Indigenous Peoples in Present Day and Virtually Ignores the Enslavement of African Americans
Next Story → A Letter to Marissa Alexander