My father rings our apple trees with his own urine,

says the scent will scare off starving deer which strip

his low limbs bare at night.  His foot is almost healed,

the bones screwed together, re-strung with tendons

from a dead teenager, who was at least alone in his

Camaro as it came apart on 85 near Charlotte.

That could’ve been you, my father says, how you

used to drive, then remembers I’m less his son already,

the process cumulative, accelerating.  He mentions

another trick if piss won’t work, will buy a garbage

bag of hair from a salon and cast it through the field.

And I’m thinking of all the haircuts I never wanted,

trimmed always far above brow line, and imagine him

scattering what fell from every forced summer buzz –

hours worth of shears droning at my scalp, a barber

shuffling the checkered floor, one a pervert with his

hand beneath the nylon cape – and how much different

it might have been for me, the other way around,

had I been born a girl but was really a boy, hair blond

and grown long by summer and the heat too much,

begging a five dollar cut, and to run nearly bald across

the ballpark as long as other boys would let me.  Deer

still range below the field each night, become their own

loose ring of seasons in this drought-made decade,

and even Lake Jocassee’s baring mud except dead center

where no children swim, its turbines slowed and power

dimmed.  My father will still limp from living room

to kitchen, kitchen to front door, stooping the gravel

drive to welcome me beyond his own startle and

amazement, whomever steps from my familiar car,

my mother’s, who cannot look at me so very long.

The Living is Easy

in although I know I don’t belong.  Someone caps another bottle,

the cooler slamming shut.  Someone tells a joke.  “Where do they put

a missing tranny’s photo?  On cartons of half and half.”  And I’m

remembering my life in Richmond – years ago, my mouth still split

lacing color arcs across her studio, palettes struck with brushes her

exhibit a success.  Leaning at my chest she cupped her palms there at

flatness without laughing:  I’ll fuck you tonight if you shave your beard off first.

Whatever she could tell I couldn’t say there by her sink – Barbasol,

cheap razors, our Stolichnaya gone – traffic echoing the gallery below

and steam across the sliding mirror.  My tits, she joked, still look like

mosquito bites.  And drawing her syringe her estradiol the needle jab

quick into her thigh – you might as well learn how to do this now.  Afterward

I followed her up flights onto the roof to see the student tenements,

houses fanning out in all directions, bronze generals astride their horses

lit up from below and past the river distant suburbs, silent lots, estates

of perfect manicure, somewhere the one she’d left, no turning

back allowed until we reached the crumbling edge to feel again

that urge to fall from which I never taught my body to recoil.

My father warns against change, though my chest’s already sore

with swelling, my biceps smooth – I trade some strengths for others.

How will you live this way?  I tell him about the older man I dated

who drove a freezer truck in the suburbs, bought beer, paid for liquor,

so I brought him home, his arms sleeved with tattoos, one a burnt

skull, its sockets black hollows.  And everything expected – insistence

and anger, blood welling in my mouth.  I watched a traffic signal

flicker across the flat wall – the room sliding from memory, sweat

in his shirt.  Then hospital, police report, valium for sleep, the room

walled off by curtain from a hall full of ruin, one man dead by heart

and pain, the on-call repeating his one word consent, a nurse 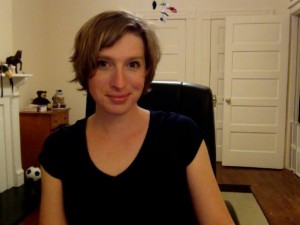 Jordan Rice’s poems have been published or are forthcoming in American Literary Review, Colorado Review, Gulf Coast, Indiana Review, Mid-American Review, Mississippi Review, and Witness, among others, and were included in Troubling the Line: Trans and Genderqueer Poetry and Poetics, The Southern Poetry Anthology Volume V, Best New Poets 2011, A Face to Meet the Faces: An Anthology of Contemporary Persona Poetry, Collecting Life: poets on objects known and imagined, Best of the Web 2009, and Best New Poets 2008.  Her work was also selected for the Indiana Review Poetry Prize, the Richard Peterson Poetry Prize from Crab Orchard Review, the Gulf Coast Poetry Prize, the Milton-Kessler Memorial Prize from Harpur Palate, the Yellowwood Poetry Prize from Yalobusha Review, and the AWP Intro to Journals Awards.  She received an MFA from Virginia Commonwealth University, and a Ph.D. from Western Michigan University.