I feel helpless after watching Fruitvale Station (2013, dir. Ryan Coogler). I feel like this hits too close to home. Literally. The nursery school, First Fruits Learning Center, is right up the street from where I stay, and I remember seeing a film crew in front of it a couple of years back while I waited for my bus in Oakland. I guess that was Fruitvale Station. I wasn’t under any doubt before that the police killing of unarmed transit passenger Oscar Grant was something that touched my life and the lives around me. But now, everytime I see that nursery school, I will think of Fruitvale Station. I watched the movie with my brother, who is a fan of The Wire and was hurt by the end that Michael B. Jordan’s character meets on that series. He said, only half seriously, that Jordan needs to stop playing Black males who get shot to death. I said, “As a Black male who’s a former actor, I think that would be nice work if one could get it.” He nodded his head. There’s too much monetary and visual pleasure to be extracted from watching Black men die and Black women cry. 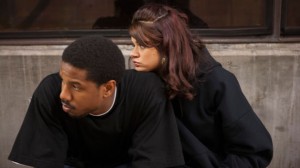 I thought of The Wire too. I loved that series. I watched every single season in a week while sick a few years ago. And I should say, I didn’t love The Wire because I find structural violence entertaining. It’s not. I loved it because its storylines and characters were richly layered, with each serving as a reminder of the constant spiralling and intersubjective effects of social iniquity, negligence, absorption, and partisanship. When watching Fruitvale Station, I recalled how Michael B. Jordan’s character–still a boy child–was forced to take care of his family in a struggling community in Baltimore. Like his character in Fruitvale Station, structural ills left him cleaving for dear life, as he attempted to make ends meet the best way he knew how, given his circumstances. Eerily, both were shot dead.

He’s somebody’s “baby.” To some, he’s black flesh–a signification and realization of black death. But to Octavia Spencer (“Wanda”), his mother in Fruitvale Station, Jordan was and is her “baby.” I have “babies” of my own. Two. I wept for Oscar, Trayvon, them and many others in the movie theater. “Is God listening?” “Did God hear their prayer?” I wondered. I sure as hell hope God hears mine. I pray daily for my boys’ escape from society’s deathwish. Can they live? Better yet, can they live while black? Anyone paying attention knows that being black means learning to dance daily in the face of death. And being a black mother of two black boys means fighting like hell to create an alternative and more life giving destiny.

So, I am sure that I will lose my cool card for admitting the following, but I rarely watched The Wire. While the show centered on a type of urban life in Baltimore, it felt so close to home–to the space where I grew up and most of my family members still live–namely, Camden. What I should have viewed as a fictionalized account was a reminder that in lives of some, structural violences are quite real.

I cried the type of cry that is felt deep in the pit of one’s stomach. I could barely move after watching Fruitvale Station. I was stunned for so many reasons. Violent death has become mundane in my life. Violent encounters with the state have become common just as well. Really, it is hard for me to write about because I am still angry at the cops who have stopped or profiled me since I was a black teen. I literally feel disdain, rage, in my body when cops are anywhere near me because they are representations of the enemy…no, they have (on too many occasions) been my enemy or the force that allowed my father to come back to my house time and time again after he abused my mother. On one hand, they demonstrated hate for what I represented as a black male in the hood and on the other, they have acted as protectors of the patriarchy (and, therefore, enemies of my black mother, aunts, and sisters). Oscar should not be dead. And the state killed him. Yet, the state continues to expand its reach into the lives of so many black and brown folk without reproach. And I am tired…not in the sense of giving in or up…but exhausted by the use of words to do the work that only straight up revolution can bring about.

I am reminded of the first few lines of Audre Lorde’s poem “Power” which read:

The difference between poetry and rhetoric

is being ready to kill

instead of your children.

Except that, I have often felt the need to remix her verse to read: The difference between poetry and rhetoric is being ready to kill, period. But then I remember that it is a perceived urge to kill (on the part of the black and brown) that the police state would want me, a black person, to act upon so that there might be reason to confirm what it already imagines me to be in the first place–a killer. But I refuse to adhere so that the police state might also find reason to exercise its “right” to shoot me–a threat. Somewhere, though, between poetry and rhetoric exists a space where creative potential exists. For the moment, lets name that space life. Right now I need to dwell in that space for a bit so that I can go on do the radical work of living. There might be reason for death, otherwise.

I brought so many “lenses” to this devastating film. I watched it with my 11-year old daughter and my mother, as well as my partner and some colleagues from Gender and Women’s Studies. A white and Chicano/a grouping, and none of us Black; not an atypical racial/ethnic configuration in Tucson, Arizona. After the film, we all just sat in total silence, tears running down our faces, with no words. Because what could we say? What words might do justice to a senseless murder, to the ugly incarnation of state violence?

So many scenes in the film resonated with me as a mother, from Oscar’s pleading with his mom to hug him in prison, to Wanda’s agony upon not being able to touch her dead son’s body. Like many mothers, I live in constant fear of something happening to my children, of not being able to hold them again, of not knowing their fate. But here is where the lived differences begin, because my fears are surely different than the fears of my Black sisters and brothers. Tamura worries her sons will be killed by armed white people, who will not be brought to justice; Darnell has felt the long arm of the law through racial profiling and police complicity in domestic violence; Omar is made “helpless” by a film that chronicles a too-close-to-home murder.

What I’ve been thinking about, in addition to militarized state violence and its racial operations, are the ways that people in my field–sociology–have spent a great deal of time, energy, and ink writing about death and dying. Yet they have spent much less time thinking and writing about the biopolitics of survival: Who gets to live? Who is slated to die? Whose bodies matter? What does it mean to “survive” a system that is engineered to destroy you?  These biopolitics are deeply racialized and racist, and also structured by class and gender.

In my current project on infant mortality, I’m investigating high rates of infant and maternal death among African Americans in the context of chronic threats to survival across the lifecourse. How does one live when one’s existence is shaped by persistent, systemic threats to that very existence? To life itself? Oscar Grant’s story brutally encapsulates this kind of patterned and systemic vulnerability.

I cried multiple times in the film.  Toward the end, I actually sobbed when I watched the pain felt by his mom and partner, when I thought about his daughter. I don’t remember a film where I felt so much anxiety going in about how it would make me feel; I walked into the theater angry and sad, I left devastated and full of rage. These emotions do not simply reflect the systemic injustice with Oscar Grant and the lack of justice in his case; it does not merely encapsulate his place within a larger history of state-sanctioned violence that is directed at black and brown youth. This is clearly part of why my emotions ran deep. 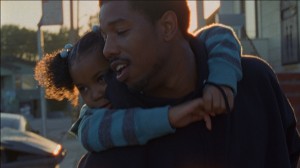 But really, my sadness and anger came from the fact that the people who profile the Oscar Grants of the world, the people who produce policies from stop and frisk to mass incarceration, are not going to see Fruitvale Station. The depth and humanity shared in the film will not penetrate the bubbles of Bill O’Reilly and others who continue to criminalize and demonize youth of color, single moms, and communities of color. I don’t necessarily think that a national screening of Fruitvale Station would change their hearts and minds, but I still wish his story, his life, and the realities of Black Death were known to the vast majority of society. Rage and sadness.

There is nothing in this movie to make us feel better about ourselves as Black people, and certainly nothing redeeming about the white justice system that (supposedly) holds the social order together. It leaves you with your tears and rage at the senselessness of a state that kills its Black residents every 28 hours– women and men, and elders, children, and every age in between. How can such a state be legitimate? The film doesn’t argue that it is. I am glad that I saw the movie Fruitvale Station, and I hope it gets wide release. But it hurts. As people living in the Slave States of America, it is a struggle to make sense of how we, slaves and masters, can live together in anything like a shared civil society or public sphere. What this film shows is that we don’t live together, even when we are side by side. In several moments of the film, Grant is shown interacting with his Latina partner and Asian friend and a white woman he befriends at the market and a train full of all kinds of people on the fateful ride the morning of New Year’s Day 2009. And, if this film is any adequate representation of Grant’s last day, he was living life and enjoying some things and trying to improve others, whatever that meant, and especially in his roles as a friend, partner, son, and father. But the whole time, you know he is going to die in a brutal way that is far more likely to victimize him and his Black family members and friends than any of the other groups of people with whom he associates as a modern resident of the very multicultural San Francisco Bay Area. This is something that director Ryan Coogler, an Oakland native, appears to understand intimately. See this film. Let yourself feel its beauty and its violence. And organize against the antiblack state that is already killing more Black people, again.

The authors are all members of TFW Editorial Collective.