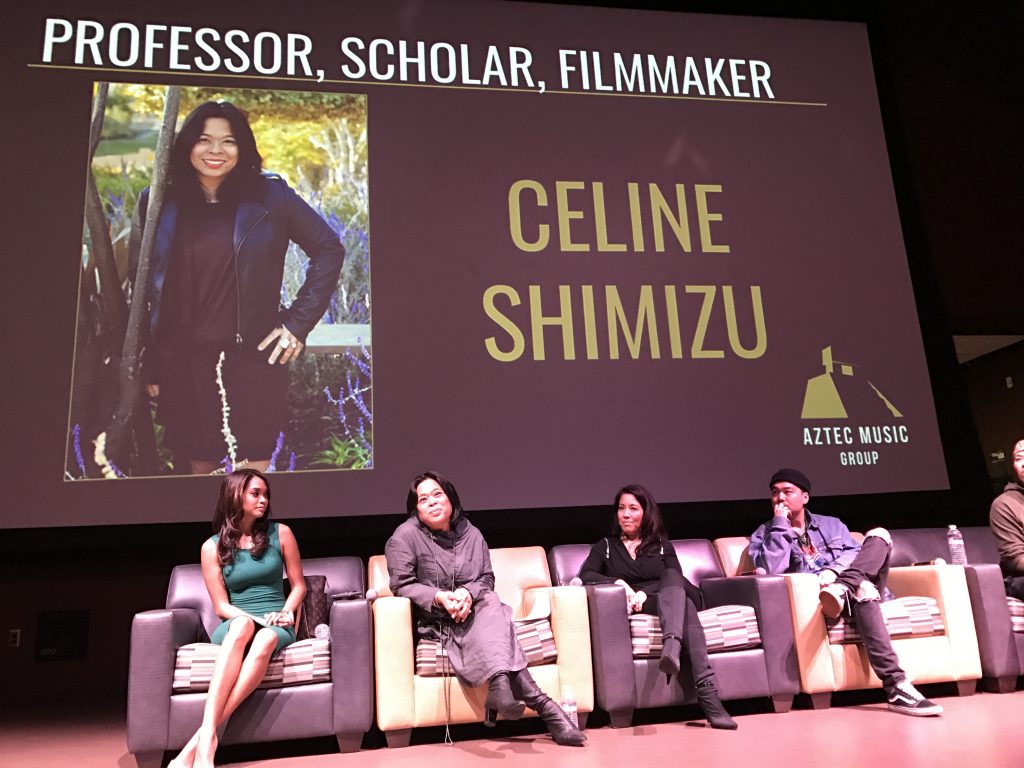 Typically, academics are neither seen as relaxed like rappers nor glamorous like news anchors. So when invited to be on a panel with the purportedly hyper-relaxed beanie set and the blown-dry big hair put together gloss, whose styles are battle-seasoned on the stage and under TV studio lights and fast deadlines, I get to reflect on my style as an academic but also as one who studies not only race and sex but porn. Like these rappers and journalists, I am tried and true too because academia as an industry usually invalidates people like me—women of color are typically objects of knowledge and not its subjects, authors, readers, and creators. Women of color fronting the lecture hall are more rare than one thinks. And women of color filmmakers, essentially what I study as a film scholar, make less than 2% of the films we see in our society. And at every step of the way in getting to my position, I confront this disparity—the physical and psychic restrictions racism, sexism, and classism dictate—yet, the older I get, the bigger my refusal not to address these injustices.

On the panel, when asked how I got started in my career, I share this: as an immigrant/refugee, my silence in the first three days of school in the U.S., led my new teachers to believe me a genius. In not speaking, not moving, I came to deserve double promotion. I skipped a grade. This benefitted me—I went all the way to a Ph.D. My teachers bolstered my confidence and authority. It also sent a message of quiet as a way to perform my race and gender. Along the way, I learn what can happen to quiet brown girls. And it is also a lesson in the criminal genealogy and inheritance of blackness where an African American man strapped and handcuffed in a hospital bed—unable to move—still gets shot because of the strong and irrational perception of threat. My unmoving quiet as an Asian woman is eyeballed as genius incompatible with anger, and the black man who can’t move is still superman incompatible with incapacity. Without doubt, these gendered racializations are intertwined. So in terms of my own inheritance of the model minority, I take heed from Audre Lorde who says, “it is better to speak” in her poem “A Litany for Survival.” I’d rather identify the intersections of power and how I benefit and experience disadvantage, speak my truth, especially as a member of what June Jordan calls, the “wrong demographic.” In every instance of my rise from elite institution to gilded rooms, I see the racism and the sexism: how you can bring your best game, ace the tests by all criteria of evaluation—and they will still see you as a maid. 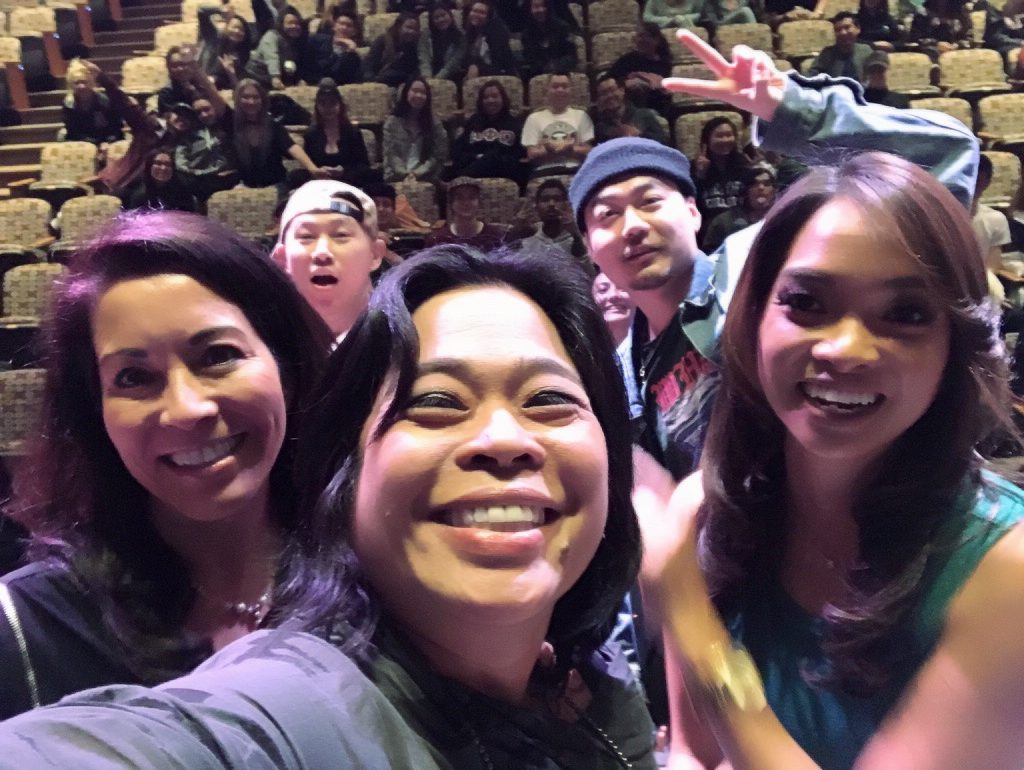 Another panelist builds upon this to say bring your best game to whatever thing you do. I agree, everyone will shut up if you do. And this is what we share as panelists in media and music as Asian Pacific Islander Americans. We must do what we do with our uniqueness. Whether it is to rap about rice before your opponent—as they always do, claim the rappers in describing their battles. Or to bring up the racial dimension of a story versus ignore it, as shared by the journalists. But it does not mean we deserve the grief we get for being magnificent when the expectation is mediocrity or that we transcend our racialization when we innovate. I cannot imagine a moment when we do transcend race. Think about it: you can love someone and say I don’t see your race, which is most likely a lie and an insult to living with racialization. It may be more precise to say race and gender and class enter our most intimate spaces: our minds, hearts, and our bedrooms. This is what I say to the young woman who approaches me quietly after the panel: how can I tell if someone loves me or if I am fetishized? Since we cannot know and since it is hard enough to find love, why not go for it and find out? It may start as a fetish but it can transform too but only when confronted and engaged mutually.  So this assertion of transcending race may be a misinformed way to think about how to confront the persistent racialization that does not leave us.

We can see this in one of the most evident ways in music when there is that accusation of black cultural appropriation in Asians rapping. Yet it is true that rap and hip hop represent not just blackness but youth while also capturing how white artists profit from black cultural forms. There is this physicality of Asian American bodies that seem incongruent or incompatible with the voice of rap that musicians in this genre must battle.

Yet the solution to think through this is to become aware of the lack of historical understanding around this phenomenon of people of different races living together, shaping each other’s lives, as well as the nuances of gender and other social categories of existence intersecting with race. For example, my co-panelist and independent rap star Dumbfoundead, is in conversation not only with African American culture but Latino and Los Angeles culture in his life as someone who grew up in Koreatown, and dropped out of school to spend years battling in Los Angeles, one of the most cosmopolitan cities with Asian, African American and Latino populations. This is in his song “Cochino” featuring the legendary Oakland rapper Too $hort.

Consistent with the title of the song that translates to a kind of masculine dirtiness, Dummy describes being with a Latina and part of their connection is “I’m from where you’re from.” This sameness of home and place of belonging is given further dimension in sex and food as intertwined in lyrics like “I’m eating that panocha with tapatio.” Panocha, as a slang word, originally means brown sugar as in a kind of carmelized food in a bag, but has now transformed to a crude word for vagina, like “pussy.” So Dummy deploys this insider word in Latin@ culture and aggravates the sexualized reference by literally putting spicy salsa in it. He links the sex to language—which makes him “learn,” but he then goes further again to claim that “your lengua make me cum.”

Their racial and ethnic coming together in sex and food extends to engaging each other’s culture and family as well. He raps: “I met her tios…I said I’m Korean/ Still call me a Chino.” We discover that while he may be a rap star, he is not Selena (Quintanilla), and therefore ultimately has no credibility in the family. Too $hort makes this claim about the interlinking of men and women of color when he raps too about being with a Mexicana in East LA and a Puerto Rican in the East Coast. And rants off about Koreans and Europeans in a “United Nations” of women, actually “bitches.” Beyond this language, what is normalized in this song and the video too are cross racial camaraderie wherein each are steeped in the other’s families, cultures, communities, languages, and bodies. And gender dynamics are not so easily pinned down. They may call women bitches but somehow the women have power to amputate, beat and destroy the men at the end of the video, as a punishment for their dirtiness, while also shaking their bodies in pleasurable performance as subjects and objects of desire both.

This rendering of the entrenchment of Koreans, African and Latin@ American peoples runs strongly throughout Dumbfoundead’s work from the song and video “Murals” that represent Latina and Korean long-term pairings to his viral hit, “Safe.” The video for “Safe” is an indictment of the media invisibility of Asian Americans, in a gendered way, wherein a white man replaces the Asian man in an Asian family. So the media is indeed not a utopic space but one that is fraught with gender issues while also capturing an important racial critique in showing what already exists in the world: linkages between people of color and sexism by men of color, even when the director of Dumbfounded’s videos are women too.

A big conclusion that all panelists shared, on this panel about the proliferation of Asian American and Pacific Islanders (AAPIs) in the media, is that we will not be given the platform to tell our own stories. We must take it, says the news anchor Liberty Zabala. But we also cannot say that the democratization we see in the larger constellation of voices online means the democratization of access. Women still have a harder time asserting their authority. At first glance, a kind of machismo and hypermasculinity is still in the expressions of Asian American media makers wherein we can say that the new media moment is one that can amplify inequality and lack of access. And then there is my work as a scholar of race, sex and porn. 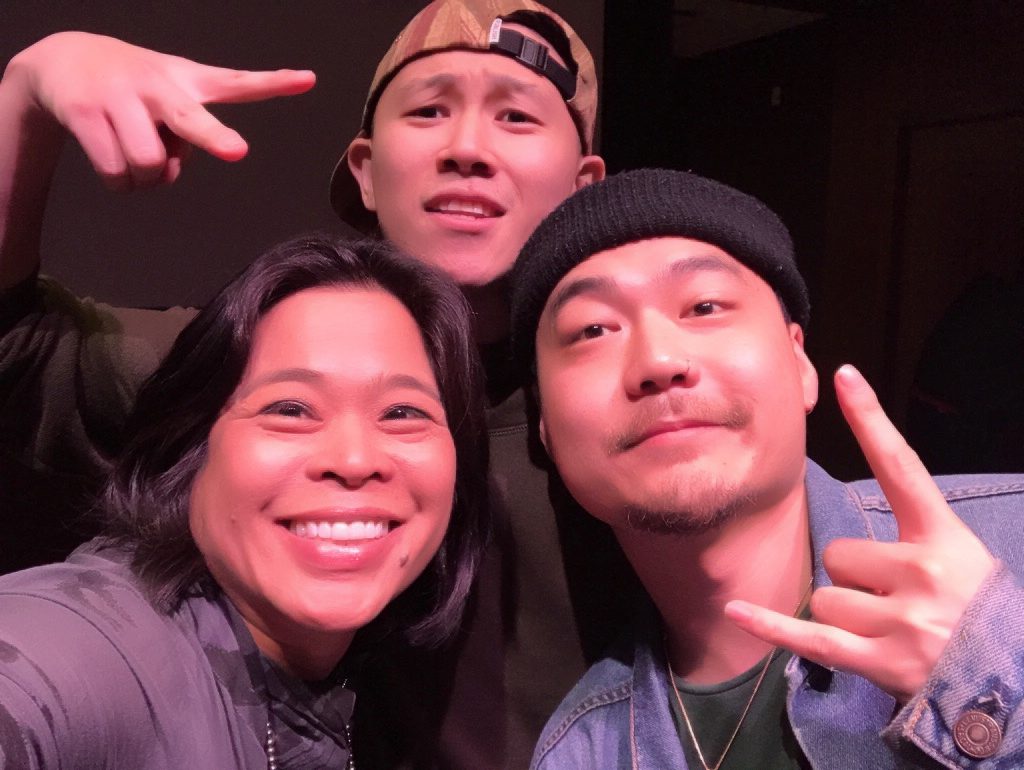 So my work and my identity as Asian American feminist porn scholar present a deep incongruence too. It is a reality, a work, an experience, an enterprise, and a critique that should be seen. Dressed how I want, saying what I want, doing what I want. How do you do this work, sustain yourself, and keep focused, asked the students in Q&A. Well, listen to what bothers you and do something about it.  Pursue what you don’t understand. I am obsessed with power—so I go there. What makes me feel flummoxed is the condemnation of sexuality for Asian women who are so hailed by hypersexuality. And beyond work, it is important to learn how to give and receive love. When someone says you are beautiful, I don’t just say thanks, I say: say more. I also go to my family, a site of love, and nurturing where I work hard not to let the self-hatred bred by colonialism, racism, and sexism enter that space and take it over. Overall, more conversations such as these are much needed: designed across generations, genres, and disciplines in order to provide insight to our many blindspots regarding race, media, and music today.

An award-winning filmmaker and film scholar, Celine Shimizu is a Professor in the School of Cinema at San Francisco State University. For more info, see www.celineshimizu.com and the blog www.femasculator.com.