Don Lemon and the Vilification of Unwed Mothers – The Feminist Wire

Don Lemon and the Vilification of Unwed Mothers

The intersection between racism and sexism is where a brown-skinned male news anchor can, from his privileged position of maleness, propose to combat racial disparities by talking down to African-American women and girls about their reproductive choices.

CNN’s Don Lemon recently agreed with Bill O’Reilly who blamed “the disintegration of the African American family” for the crime rates in African American communities. Lemon claimed that African Americans need to stop wearing saggy pants, using the N-word, littering, and discouraging education. His final and, according to him, “probably the most important” imperative was directed specifically at African-American women and girls. Said Lemon,

Just because you can have a baby, it doesn’t mean you should, especially without planning for one or getting married first.  More than 72% of children in the African-American community are born out of wedlock. That means absent fathers. And the studies show that lack of a male role model is an express train to prison, and the cycle continues.

The graphic that appeared behind Lemon as he spoke read, “72% of African-American babies born to unwed moms,” just in case Lemon’s statement could be read as a gender-neutral criticism. The message is that fathers are essential to a good upbringing, and mothers alone are inadequate. O’Reilly and Lemon’s statements are just drops in the river of rhetoric from a society that has been vilifying mothers without husbands for centuries.

Unwed mothers are not a social disease.  Lemon and others typically cite “studies” that claim children of unwed mothers are destined for poverty, prison, or poor educational outcomes. However, such studies do not show an inherent causal relationship between growing up without a father and ending up in prison or in poverty. For example, Paul Amato’s 2005 article, “The Impact of Family Formation Change on the Cognitive, Social, and Emotional Well-Being of the Next Generation,” argues that children raised by single parents are more likely to lack economic means to purchase educational resources such as books and computers. A 2011 American Sociological Association study proposes that economic hardship is responsible for the fact that unwed mothers seem to experience higher rates of stress-related health problems. The message seems to be that unwed mothers are typically poor, and poor people shouldn’t have children. If unwed mothers experience more stress, perhaps this is because they have to constantly contend with the public message that they do not have the right to exist.

Much of the difficulty of being an unwed mother comes from dealing with discrimination. As an active, engaged parent in my child’s education, I had to fight with my son’s teachers who had low expectations for him and were unwilling to invest in his educational goals because they had subscribed to the fallacy that one should not expect much from children of unwed mothers. During my Master’s program in education, I discovered that this discrimination is institutionalized and that teachers are trained to be on the lookout for children who are “at-risk” for academic failure not by assessing their individual skills, but by prejudging them based on whether or not they have one or more of a specific set of characteristics including being non-white, having immigrant parents, and living in a single-parent home. It does no good to encourage children to stay in school if school is the place where they will learn that they are nothing.

But the problem is not just schools. Discrimination against unwed mothers and their children is pervasive. I once tried to sign up for a discounted “family” membership at a local YMCA but was told that, as a single mother, I had to prove that I was widowed or divorced. When I asked what about single mothers who conceive their children as the result of rape, the representative merely shrugged and mumbled something about policy.

In a college art class to which I had taken my son with the instructor’s permission, a group of women gathered just in front of me and carried on a loud conversation about the pestilence that was unwed teenage mothers, complaining that they were having children out of wedlock for the sole purpose of living off of welfare.

News media, politicians, and public service announcements repeatedly reminded me that as a young mother who worked multiple jobs, went to college, and sacrificed a social life to spend quality time with my son, I was apparently what was wrong with this country. I cringe when I imagine the psychological torture endured by unwed mothers in New York City who have had to pass, on their way to work or school, any of the images that are part of Mayor Bloomberg’s campaign against unwed motherhood. One advertisement shows a perturbed but adorable brown-skinned girl beside the words “Honestly Mom . . . Chances are he won’t stay with you.  What happens to me?” I want to tell the little girl, Your mom will take care of you.  Chances are she’s not an idiot. Chances are she’s aware of the reality that men are often unreliable.  Chances are that’s why she didn’t wait to get married before having children.  Chances are she doesn’t need a man around to give her permission to be a good parent.

And unwed mothers have to deal with the moral judgments of random people they meet. I eventually stopped bringing up the fact that I was a mother, just to avoid the inevitable conversation:

“Oooooh,” followed by a judgment of my character in the form of a snarky comment, a disapproving facial expression, or an uncontrollable urge to talk to someone else, anyone else but me.  One woman patted my hand and said, “We all make mistakes,” and I believe she thought she was being nice. I wanted to tell her that she did not know my story and had no right to decide that my son’s existence, my choice to have him and raise him, were “mistakes.”

The trope of unwed-mothers-as-social-disease is both unsupported with any real evidence and dangerous to the well-being of many mothers and children. Yet it is a popular trope because it serves the rich, white, male power structure. It perpetuates the notion that the poor are poor because of their own moral failings. Therefore, in the absurdity of a capitalist society in which a few have much more than they need and many have far less, the masses are kept in submission with the myth that people are where they deserve to be. It also serves Eurocentric racism (as the fact that Lemon was echoing O’Reilly should indicate) by perpetuating the centuries-old stereotype that African-American women and girls are hypersexual and procreate uncontrollably without thought to consequences.

And it serves the patriarchal and heterosexist power structure because it encourages women to feel that their primary goal in life should be to marry a man. The argument that an adult male in the home is necessary for the financial and moral stability of the family is predicated on archaic notions that men should and do have more economic agency than women and that women are better off in domestic supporting roles that merely complement their husbands’ public existences.

As an undergraduate student, I met several divorced mothers who were pursuing their first college degrees because they initially opted for marriage rather than education. They believed in the delusion that marrying a man was the key to making a stable home for their children. One woman lamented, “I did what I was supposed to do.”  But husbands sometimes develop substance abuse problems, lose their jobs, are incarcerated, or opt to leave, sometimes to start new families with other women or men.  Women who choose marriage to men before motherhood can become unwed mothers with a single-income budget. According to the CDC, more than half of U.S. marriages end in divorce, so to advocate marriage to a man as a golden ticket to a happy home that will produce a well-adjusted child is unrealistic.

If the goal is to nurture healthy children, here are my five pieces of advice:

1. Stop telling the children of unwed mothers that they needn’t bother striving for success because their bleak destinies were fixed the moment their mothers conceived.

3. Understand that the unwed-mother-as-social-disease narrative perpetuates homophobia and sexism.

4. Realize that a child is always a gift, never a symptom of social disease.

5. Recognize that women can be good role models for their children as evidenced by the fact that many children of unwed mothers grow up to be healthy, happy, kind, law-abiding, intelligent, talented young people. . .just like my son. 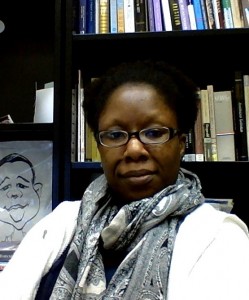 Dr. Rabi’a Hakima has been an instructor of English at the University of Alabama at Birmingham since fall 2008. She earned her Ph.D. from Auburn University in fall 2011. Her primary research interests are feminist theory and women’s writing.