Rape in India: Domestic and Global Politics – The Feminist Wire

On January 23, 2013, the Asian Studies Center and the Center for Gender in Global Context at Michigan State University (MSU) organized a “teach-in” panel discussion on recent developments surrounding the tragic rape and death of a 23-year old woman in Delhi, India. The panel was led by Dr. Karin Zitzewitz (Assistant Professor of Art History and Visual Culture) and moderated by Dr. Sean Pue (Assistant Professor of South Asian Literature), both of whom had been in Delhi during the protests. They were impressed by the energy and wide-ranging agenda of the protesters, as well as by the severity of the Indian state’s response: water cannons on the first day of protests, blocking off the center of Delhi with riot police, and shutting off public transportation.

Upon returning to the United States, they decided to convene a “teach in” on the events. They brought together a broadly interdisciplinary group of people at MSU with relevant professional and research experience to discuss the U.S. domestic and global politics of the Delhi gang rape. The panel included students, research staff, and faculty from across disciplines who together reflected on the incident and its implications. Topics included a timeline of events on and after the December 16th gang rape; how the rape is yet another attack against women; how Delhi as an urban space creates a context that becomes conducive to sexual violence; some findings from the National Family Health Survey dataset in India covering twenty five states that explain how attitudes to gender inequality and related gender violence in India are deep and pervasive; and the similarities of rape and other forms of sexual violence in India with those in the United States. 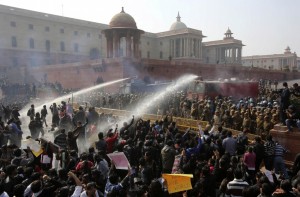 The timing of the panel was crucial. Later that evening (January 24th, morning in India), the Justice Verma Committee, a three-member panel set up to suggest amendments and recommendations regarding the existing sexual violence laws (particularly related to rape), presented its report to the Government of India. Along with offering many suggestions, the report criticized the government, the police, and public apathy towards rape in India. The report has been hailed as a manifesto for gender equality in India, and currently various groups in India are campaigning for immediate implementation of the recommendations.

In the United States, on the other hand, last year’s election campaign reminded us how, in the world’s most powerful democracy, women are still treated as second-class citizens. The campaign provoked discussions about abortion, the “legitimacy” of rape, contraceptives, and women’s bodies. It became a campaign centered on “gender wars” and the “war on women.” And then there is the 1994 Violence Against Women Act, a historic set of measures that was allowed to relapse this year, eighteen years after it was brought into effect.

In this forum convened especially for The Feminist Wire, we offer written versions of our panel presentations in order to bring forward the importance of why the fight for equal rights for women as citizens is far from being over both in the world’s largest democracy, India, and in the world’s most powerful democracy, the United States.

“A Timeline of Events in the Delhi Gang-Rape Case,” by Karin Zitzewitz

“This Is War! Reflections on the Delhi Gang Rape,” by Soma Chaudhuri

“Urban Spaces Are Conducive to Sexual Violence: The Case of Delhi,” by Meski Glegzaibher

“If You Are Now Saying, No, Women Are Equal…,” by Amita Chudgar

“Some Concluding Thoughts on Violence Against Women in the U.S. and India,” by Julie A. Hagstrom

[1] All authors are listed alphabetically and have contributed equally to this piece. Sean Pue can be reached at pue@msu.edu