A Timeline of Events in the Delhi Gang-Rape Case

I begin with a brief timeline of the attack, the protests that followed it, and then offer some suggestions first about how to interpret media coverage of the event and second, about the event’s general implications for feminist debates in India.

The attack occurred on December 16th, 2012. By two days afterwards, the basic events were established in the media. Those events were the following:  that a 23-year old medical student and her male friend were assaulted on a private bus, having been picked up in the respectable South Delhi locality of Munirka after watching a film. While the bus drove around Delhi, five men gang-raped the woman for approximately 90 minutes, beat her, and sexually assaulted her with an iron rod. The beating did irreparable damage to her abdomen. The men beat the woman’s male friend until he was barely conscious. Both were then thrown off the bus, half-naked. They were picked up by police and taken for medical treatment. By December 18th, when reports of the crime were published in the press, the police had arrested two brothers, including the bus driver, and were looking for their four accomplices, one of whom turned out to be a minor. All were drunk at the time of the assault.

On December 19th, relatively small protests were held at the residence of Sheila Dixit, Chief Minister of Delhi, mostly by students and progressive women’s organizations in the capital. At that point, Kavita Krishnan, Secretary of the All-India Progressive Women’s Association, made a statement. She protested the lack of government action and statements by Dixit disowning responsibility. In response to Dixit’s statement that to be on the streets of Delhi after midnight meant that the rape victim was “adventurous,” Krishnan said:

This statement went viral. For many I spoke to in Delhi just after the protests, it was the best evidence of the gap between the tepid reaction of the government and the anger of activists. The police response to these protests was to turn water cannons, or fire hoses, on the protestors.

One of the first political statements was issued on the floor of parliament by conservative politician Sushma Swaraj, who demanded the death penalty for the rapists on the basis that the victim, once raped, would be considered a zindaa laash, or live corpse. (Murder can be punished by hanging in India.) Others eventually called for chemical castration or for designing an anti-rape law that would resemble laws on the books for terrorism, which give extraordinary power to the state to detain suspects. 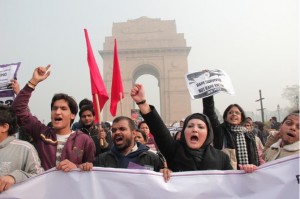 Protests against the Delhi and central governments and, particularly, against widespread police inaction in rape cases escalated on December 22nd and 23rd.  The main site of the demonstrations was India Gate, a major monument (and often a family picnic site) at the end of a long promenade that ends in the Lok Sabha, or seat of Parliament. In Washington’s very similar geography, it corresponds to the Washington Monument/Lincoln Memorial (which is used for similar purposes). Police response to the protests was very harsh, including not only the water cannons but also tear gas and the use of physical violence against protestors who breached barriers and overturned cars. Reportedly, the make-up of the protesters had changed from mostly female college students to male representatives of political parties. A police constable was injured during the protests and died of the effects of cardiac arrest two days later.

The Prime Minister, Manmohan Singh, finally made a statement on December 24th, appealing for calm and vowing stringent measures on behalf of women in the country. The leader of his political party (Congress), Sonia Gandhi, met with protestors earlier. Among other political responses was the statement made by Abhijit Mukherjee, Member of Parliament (and son of the President of India), on television (translated from Bengali):

“What’s basically happening in Delhi is a lot like Egypt or elsewhere, where there’s something called the spring revolution, which has very little connection with ground realities. In India, staging candle-lit marches, going to discotheques – we did all this during our student life too, we were students too – I know very well what kind of character students should have. Those who claim to be students – I can see many beautiful women among them – highly dented-painted (sic) – they’re giving interviews on TV, they’ve brought their children to show them the scenes. I have grave doubts whether they’re students, because women of that age are generally not students.”

The phrase, “highly dented-painted,” an obscure term that actually needed to be explained in the English-language media in India, is here used to dismiss the protesters as out of touch with so-called “ground realities.”

Meanwhile, the victim made statements to the police from her hospital bed, and the media collected details about her family and background. Despite original assumptions that, as a medical student, she was middle class, she was actually from a poor family that had migrated to the city from the countryside of Uttar Pradesh. The daughter, the eldest, sister to two younger brothers, and reportedly the most promising student in the family, had received such a good education because of repeated sacrifices made by her parents. Most importantly, they had sold their ancestral land to pay for her schooling, but the father also worked multiple shifts at his job, loading luggage at the international airport. When the woman’s condition worsened, she was airlifted to a hospital in Singapore, where she died of multiple organ failure on December 29th.

One week later, her father released her name, Jyoti Singh Pandey, to the press, saying:

“We want the world to know her real name.  My daughter didn’t do anything wrong, she died while protecting herself.  I am proud of her. Revealing her name will give courage to other women who have survived these attacks. They will find strength from my daughter.”

There are a number of crucial questions raised by these events.  Let me just articulate two:

First, while it is clear that the public reaction was tied to the sheer brutality of the assault, there was also clearly a class component to the protests and their coverage by the media. Because she was identified as a student, the crime against her, particularly at the hands of working-class men, was cause for disbelief. The details of her actual class position added much complexity to the representation of the situation in the press.

The real story of this girl’s class background and the investment in her education is revealing of the rapidly changing social situation in Delhi. The fact that her family placed such emphasis on her schooling and was willing to delay her marriage—as they specifically mentioned in their interview with the press—may be indicative of larger demographic changes in the city.  Her act of being out as a striving woman between social classes, if you will, points to the new realities for young women in the city.

Second, in the weeks after the attack, the newspapers and cable news channels shifted their editorial approach to news about brutality towards women and, as a result, news of horrific rapes from around India were displayed prominently rather than buried. In particular, another gang rape on a bus occurred in the hills north of Delhi in the days after this attack. This only served to highlight the severity of the problem and the widespread vulnerability of women in public space across India.

This was among the factors that led many feminist commentators to argue vociferously against treating this attack as exceptional in any way, either in terms of New Delhi as the so-called “rape capital,” which implies that other areas of India are safer, or separating rape itself from related forms of subjugation of women, whether that be marital rape, rape as war crime, dowry-related violence, female infanticide, honor killing, and street harassment, which is usually called by the extraordinarily patronizing term “eve-teasing.”

“The new slogans are also about right to public spaces, autonomy, freedom, love – about the right to live life without constant surveillance, policing, protection – and even the shackles of love.  This is a response to pent up fury about many, many issues in the lives of girls and women. And while this particular instance of publically enacted brutality triggered this protest, it is very clear from the groups and individuals associated, the ongoing discussions, some of the profoundly serious responses in newspapers and websites, and the nature of demands made that the protestors (i.e. all of us) are asking for far more than retributive violent justice.” 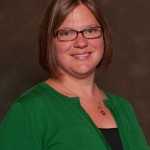 Karin Zitzewitz is Assistant Professor of Art History and Visual Culture at Michigan State University. Her book, The Art of Secularism: The Cultural Politics of Modernist Art in Contemporary India, will be published by Hurst & Co Publishers in 2013. Based on extensive fieldwork in three centers of the Indian art world–Mumbai, Vadodara (Gujarat), and New Delhi–the book concerns the changes wrought by the rise of Hindu nationalism on the profoundly secularist practice of modernist art. She collaborated with Mumbai gallerist Kekoo Gandhy on a memoir, The Perfect Frame: Presenting Modern Indian Art, which was published in 2003. Along with book chapters and reviews, she has published articles in Third Text, Visual Anthropology Review, and has a forthcoming piece in RES. She is curating solo presentations of the work of Naiza H. Khan and Mithu Sen at the Eli and Edythe Broad Art Museum at Michigan State University in 2013.