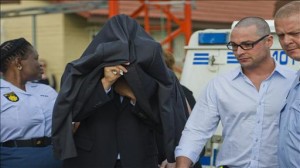 That prosecutors have charged double-amputee track athlete Oscar Pistorius with the murder of his girlfriend Reeva Steenkamp has made headlines throughout the world. Together with fellow South Africans and many others, I have been attempting to make sense of the unfolding tragedy. From the vantage point of a black crip feminist, I am both fascinated and perturbed by the narratives surrounding the fatal shooting of Steenkamp. Through the lens of pop culture, what makes that which has transpired, and has yet to transpire, tragic? How are the tragedies framed in the media? And why? Here, I critically examine these and other questions to demonstrate just some of the ways in which power relations have shaped perceptions of innocence, violence, heroism, context, and death. 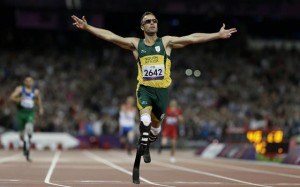 Which begs the question: how has the construction of Oscar Pistorius as the personification of inspiration porn garnered public sympathy in reference to the first degree murder charges levelled against him? The reality that Oscar may have shot and killed his girlfriend seems almost too ludicrous of a probability for many people to fathom because for Oscar to have “overcome” the so-called tragedy of disability means that, surely, he must be in possession of a positive disposition that (literally) enabled him to do so in the first place. Therefore, owing to that positive disposition (embodied through the active disembodiment of disability), he is seen as incapable of premeditating murder, which has manifested itself in a rather problematic presumption of innocence. To be clear, the “innocence” to which I refer functions not necessarily as an endorsement of his character, but rather as a form of ableism born out of a denial of agency to disabled bodies. Indeed, many people don’t conceive of Oscar as an active agent in his own life because, off the track, compulsory able bodiedness outperforms him.

Evidently, and somewhat ironically, Oscar’s defense team and PR strategists are drawing from these ableist tropes to make a case for his innocence (in the judicial sense) as well as to accelerate the restoration of his reputation. In the wake of his court appearance on Friday, his family and management company issued a statement, reminding the public “that Oscar has made history as an Olympic and Paralympic sportsman and has been an inspiration to others the world over.” This crip-spiration narrative was re-propagated by The New York Times, in which one of the coaches who worked with Oscar on the 4×100 meter relay at last summer’s London Olympics was quoted saying: “Oscar was an icon for South Africa [because] he handled his disability with such character and discipline. It is a big shock for everyone.” 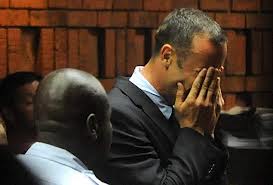 This misguided shock has prompted what I call “psychosocial strategies” by which many folks are trying to salvage Oscar’s constructed image. These psychosocial strategies deflect attention away from Oscar as a crip with agency and direct blame to external factors. One such example is the claim that the alleged implication of Oscar in his girlfriend’s murder is somehow symptomatic of a brutally violent South Africa. The New York Times recently echoed this sentiment, writing: “[Oscar’s] arrest is a stark reminder that violence is an everyday fact of life in South Africa, where fear of armed robberies and carjackings prompt the wealthy to take refuge in heavily guarded gated compounds and arm themselves with handguns.”

This is a dangerously problematic reading of the politics of violence in South Africa because it blatantly ignores the fact that violence functions within the sociopolitical context of a country still struggling to resolve deeply entrenched racialized inequalities. Indeed, the “wealthy” to which the NYT makes reference are predominantly white and their “fear” of (black) perpetrators of violence is bound up in a structural web of white privilege, white guilt, and anti-black racism. For people attempting to salvage Oscar’s constructed image, the narrative of a “violent South Africa” (without context) not only justifies or explains his gun enthusiasm but also absolves him of responsibility in relation to violent conduct. 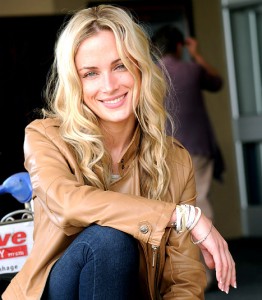 Over the next few days and weeks, many people – including Oscar himself – will attempt to salvage, restore, and absolve. But what cannot be salvaged is the death of Reeva Steenkamp. For me, the real tragedy is the erasure of her life in the public discourse framing her murder. There’s not much wiggle-room in the media to honor her memory without centralizing Oscar. A memorial service for Steenkamp took place today which, sadly, was overshadowed by Pistorius’s bail application hearing.