Young, Gay And Homeless: Fighting For Resources – The Feminist Wire 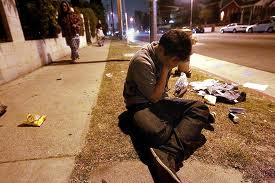 A number of studies of homeless youth in big cities assert that somewhere between 30 and 40 percent of homeless youths identify as lesbian, gay, bisexual or transgender. It is likely due to the fact that many gay youths are more often kicked out of their homes than straight youths, or feel so uncomfortable in their homes that they leave on their own. Studies also show gay individuals are coming out at younger and younger ages, meaning the GLBT movement should not just be concerned with the rights of GLBT adults, but that of adolescents and children, too. Experts in the fields say that the rights of GLBT youth and children involve resources, especially since so many of them end up homeless or on the streets, rather than equality legislation like marriage and adoption rights.