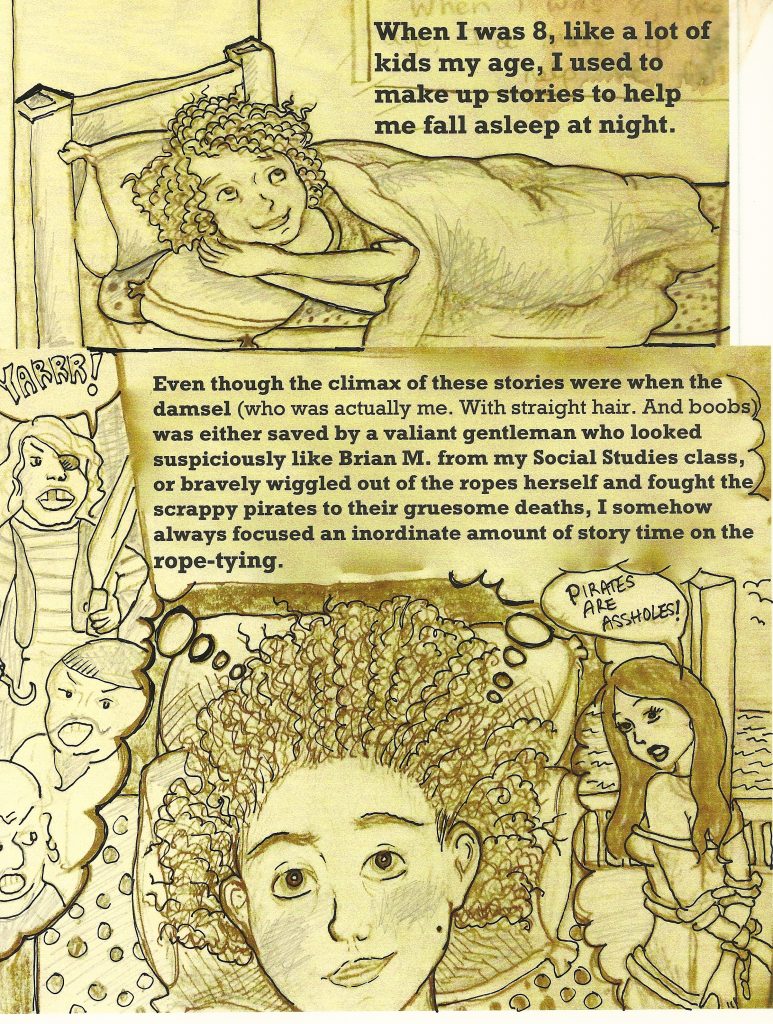 When I was eight years old, I used to make up stories at night to help me fall asleep. They usually involved a helpless damsel getting captured by evil pirates on a ship. The climax of these stories involved the damsel (who was actually me, with boobs, and the straight hair I desperately wanted) either being saved by a valiant young gentleman who looked suspiciously like Brian M. from my social studies class, or wiggling out of the ropes the pirates had tied her up with and fighting the scrappy pirates to their gruesome deaths. For some reason, I always spent an inordinate amount of time focusing on the rope-tying aspect—the pirates surrounding the damsel, manhandling her into vaguely suggestive positions, and tying her to a wooden stake.

I was deeply ashamed and confused about the whole thing though. When I was thirteen, during a late night bonding session at camp I asked my much cooler friend Sophia if she had ever dared touch herself. “I did it once but only once” I lied, worried I’d come off as a freak. She looked at me and casually went “I do it all the fucking time.” After her admission, pretty much every single girl in our cabin came forward to reveal that they, too, were avid masturbators. It was a beautiful bonding moment, a bunch of thirteen year old girls realizing we all had something supposedly shameful in common: jacking it.

By the time I was fifteen, I had transferred to a small-town catholic school and the focus of conversation was all about sluts. Who’s a slut, what that slut did, she kissed five guys, she had sex with him in the kitchen while the dog watched, she has no respect for herself, hot dog down a hallway, whore-muffin….etc. It seemed the girls I sat with at lunch could talk of nothing else and the boys were just as bad.

I didn’t get it. To me it was a glaring double standard that baffled and enraged me. I would ask girls I knew WHY it was slutty to sleep around while female but the same wasn’t true of males. The answers would range from “because women are more emotional” or the dreaded “respecting yourself.” There’s also a great one about how a key that can open any door is a great key but a lock that can be opened by any key is a shitty lock. Let’s all take a second to let how stupid that is to sink in. Seriously, take a minute to marvel at that one.

The “respect yourself” one I found particularly infuriating.

I enjoyed sex and indulging in it, it felt good. So how was I disrespecting myself by giving myself what I wanted? Why were men so disgusted by the things they did themselves?

Why would I allow another gender to impose criteria on me they didn’t even use themselves when judging their own respectability as a way to discredit mine?

I wasn’t very nice to boys in high school. I would use them and justify it with my “expert reasoning” that men couldn’t separate sex from love. This is an unproductive and vicious activity I like to call “spite feminism.” I wound up hurting a lot of people who didn’t deserve it and I’m not proud of it.

By the time college rolled around I started to feel a little….unsatisfied. One day, a little voice in my head suggested I get nostalgic with my self-love.

One night I hesitantly decided to visit my old friends. They were more than happy to see me. “We missed you!” exclaimed the leader of the crew, a ripped tank-top clad pirate with a chiseled jaw and cliché eyepatch. “YARRRR back!” growled the peg legged long-haired hunk in stripes.

And then something TERRIBLE happened. The lead pirate spat a nasty name at me. The word I hated most. The word that represented the antithesis of my feminist beliefs and solidified the double standard I despised. The word the girls in my high school tossed around and used to ostracize other girls like it was their job:

All of a sudden, every repressed, filthy thought I’d ever had came to the surface. I wanted some incredibly degrading things. I wanted a lack of control and to be stripped of my dignity.

The more comfortable I became with objectifying myself and being degraded in my imagination for my own pleasure, the more out of body and surreal my experiences became.

Looking at sexualized images of men is nice and can be quite titillating, but because my arousal is so based on the straight male gaze, those images don’t do it as much for me. In fact, I believe society is accustomed to men being the consumers of sexual images of women that sexualized images of men are presumed to be for gay men, not for heterosexual women. I think this is because people are quicker to assume that the ability to be an aggressive consumer and seeker of sex are exclusively male traits, rather than let themselves entertain the idea of women as assertive, sexually autonomous beings.

I don’t think I’m special or different for liking a bit of BDSM and degradation in bed. In fact, I think a lot of aspects of my sexuality are somewhat the norm for many straight women, due to our culture. My disappointment with this realization wasn’t met with anxiety about being a freak or a deviant; rather it was met with anger. After all my fury at men, my sexuality actually mirrored the pervasive “porny” sexuality men supposedly possessed. What bothered me was that I got off on misogyny. I had done my best not to soak up the societal message of women as inferior or submissive. However part of my brain still absorbed and processed this message loud and clear, deciding to act it out during arousal; what I considered the ultimate taboo for a feminist. The presumed shame associated with female sexuality that I so badly wanted to de-stigmatize was the same shame I got off on in bed. The word “slut” is still an incredibly loaded word for me. It’s both representative of everything I hate about the way women are treated for having sex and the first thing I want to be called when I, myself, am having sex.

I no longer feel like a bad feminist after masturbating. I’m comforted by the knowledge that liking what you like sexually and not being afraid to voice it is itself a feminist act. I’ve made friends with the pirates and the jockbros in my fantasies. I have finally achieved the ability to separate my kink from my world-view while still realizing how they intersect. It’s okay to want to be submissive in bed no matter how much Andrea Dwarkin you’ve read. I encourage girls and women everywhere to like what they like and explore their fantasies without judgement from themselves or others. It’s what the pirates would have wanted. 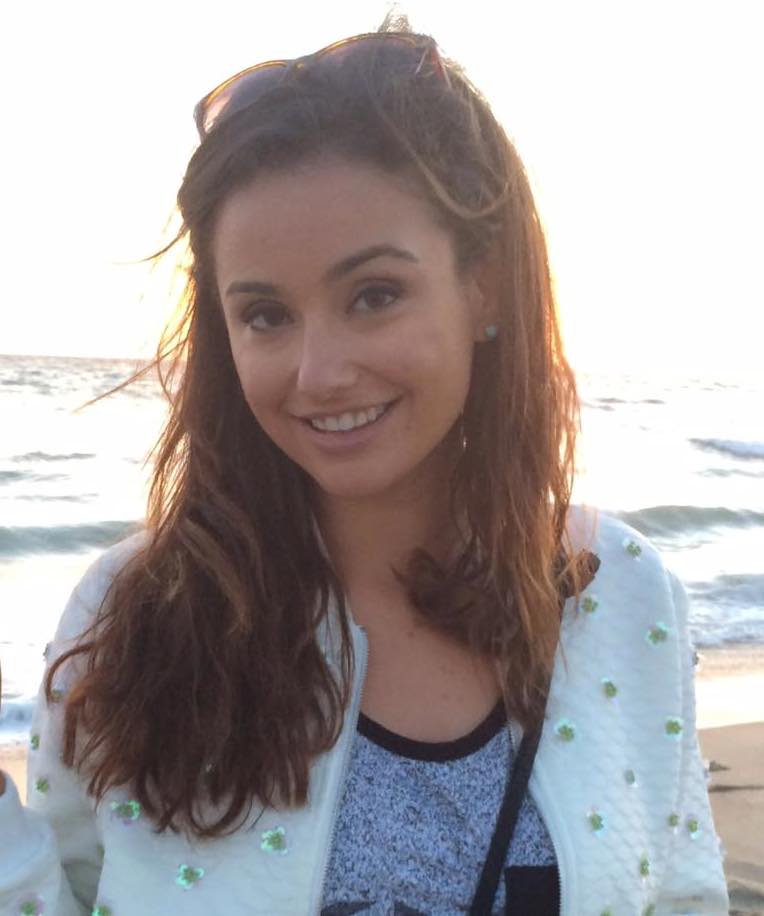 Sasha Fisher is a former actor turned graphic novelist and painter. She has always been fascinated by the virgin/whore dichotomy and how this relates to gender and power within sex. Shame Based Fun is part of a much longer graphic novel that was turned into a one woman show in Hollywood a few years ago. Sasha currently lives with an elderly, incontinent pug who wears very chic leopard print diapers.