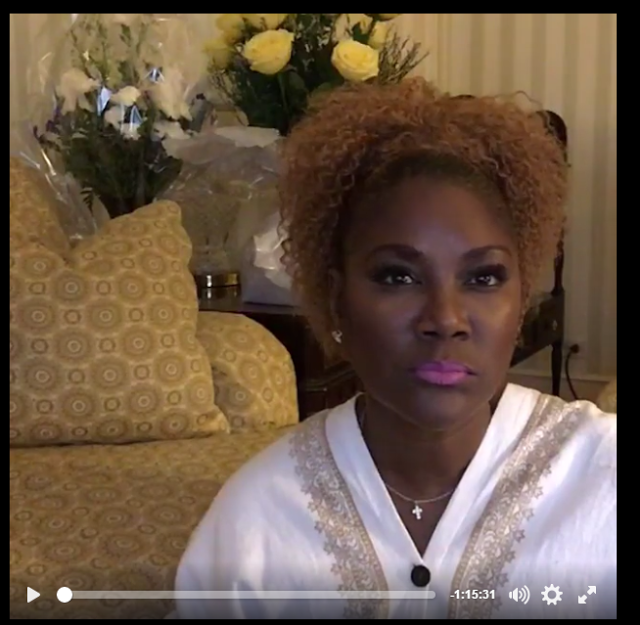 Last Monday a good friend sent Juanita Bynum’s “No More Sheets Part 2” via inbox with the caption, “She’s baaaaack.” I clicked the hour long video, which unpacked Bynum’s thoughts on what women should/should not wear in church. It was crass. Moreover, it was unimaginative, particularly in the ways it shamed Black women for the clothing they choose to put on their bodies. So, my initial watch was an exercise in what I will call “Problematic Post Bingo”:

Bynum: I can look at sluts on the streets everyday, but I’m not gone have a timeline of women that’s talking about ‘I love God’ and I gotta keep looking at you like that…I didn’t sign up for a hoe to be my daughter.

Perry: Slut shaming & hoe language for B and I.

Bynum:(Even) The White house has a dress code… the police department… the fire department…. The doctors… the lawyers…

Perry: Connecting the bodies of Black women to institutional and economic convenience for N.

Bynum: I should not be able to see… (examples throughout the video include) the crack of your cleavage…the cup of your butt… the print of your vagina… that onion (behind)… no stockings…sweating all down your legs.”

Perry: The hypersexualization, complicated disgust, and simultaneous fetishization of Black women’s bodies via the Jezebel stereotype for G (Collins; 1990).

Bynum: Do you think a real man(d) of God wants you? Because if that’s what it took to get him… you ain’t gone keep him…”

Perry: Catering our gender expression and bodily autonomy for a primarily male gaze (including the gaze of men and the gaze of a God that is imagined to be male) for O.

In the very last minutes, Bynum offered a closing thought:

Imma say this and I’m leaving…Well, you know what…You might say…’That ain’t what I wear to church.’ That ain’t what you should wear period. And that’s why we got a bunch of schizophrenic women in the house of God… oh that’s what the problem is. [bold and italics mine]

The implication of that quote is particularly insidious. It is positioned in the last moments of the video as if an afterthought. However, the suggestion that Black women choosing to wear “revealing” clothes are schizophrenic, one, imagines Black women’s sexual autonomy, gender expression, and resistance to body shaming as a disability, two, situates mental illness alongside inherent sinfulness, and three, intimates disposability of bodies (and the persons) that fall outside of mythical norms of dress and/or bodily ability (Lorde, 1984). I won’t argue whether this was Bynum’s intent or not. That simply isn’t the point. The point is, how rhetoric around sexual choice, fluidity, and autonomy is so often situated alongside of disability, and particularly so for Black church women. This produces a context where our desires, sexual autonomy, and gender expression – down to the very clothes that we wear – are decried and pathologized. Yikes.

This rhetoric needs further exploring. What appears to be an “afterthought” or “sidebar” conversation, and thus trivial, is actually pretty significant. Ableist constructs (alongside white supremacy, misogyny, and other “powers that be”) pressure Black women to fit into mythical, docile, and normative bodies. And if we never identify this rhetoric, or if our ears aren’t tuned to hear it, we won’t understand how it keeps us bound. Additionally, if we don’t divest from ableist rhetoric, which alienates those (of us) who have chronic illnesses, we will continue to pathologize choice and desire. Many of us have likely seen and heard this sort of messaging before, and unfortunately across many pulpits (tangible or constructed). This notion of “sickness as sin” is often invoked to temper the sexual autonomy of those society imagines to have deviant bodies — broadly, bodies that fall outside the constructed norms of whiteness, ableism, heterosexism, etc., (Terry & Urla, 1995).

Another example is Pastor Kim Burrell’s viral video, which antagonized members of the LGBTQ community and fetishized the sex lives of the congregants (“taking another man’s penis to your face,” “shaking your face in another woman’s breasts,” etc.), among many other things. To be clear, Burrell was not operating with different points than Bynum – it’s important to note that explicitly. Burrell  situates sexuality next to illness/disability when she posits:

Mr. I Am Delivert with all these different types of spirits… on Jimmy Kimmel… you see what the enemy is looking for?… The minute somebody comes out with a deaf and dumb spirit… a mute spirit… one that can’t even talk… and that has a perverted spirit says that ‘I am delivert’ and makes it all the way to Jimmy Kimmel…

This is bigger than Bynum and Burrell.

This type of pathologizing happens all too frequently. I am a Black, chronically ill woman who grew up in the Black Church. I spent many formative years at my home church. I fell in love in a Black Church. I did my best to navigate what it meant to truly live within a space that both included me (at some points) and marginalized me (at others). However, in my lived experience — when I no longer bought into the theology of God as cosmic candy-snatcher and sex regulator, when I could identify and resist repressive double standards, when I began advocating for real conversations around how dangerous the male gaze is, when I dared to view my sexual desire as good, right, and holy, and when I posited that I had a choice about what I wore… and that choice often included wearing my wonderful cleavage out  — one prominent argument lobbied against me was that I was “crazy” and in possession of a “reprobate mind.” My “craziness” or mental instability was evidenced by my refusal to comply with white supremacist, patriarchal norms.

And I have spent too much time in community with women in the Black Church to feel this was an isolated event. To this end, our intersectional analyses are incomplete as long as we fail to critically engage how ableist rhetoric is weaponized toward sexual repression (Crenshaw, 1993). For if, as Frantz Fanon posits, black flesh is seen as inherently sinful and dangerous, then it may not be a stretch to say that ableist rhetoric, which finds roots in white supremacy and capitalism, imagines the bodies of Black women as pathologically sinful and dangerous (Fanon, 1967). This assertion betrays itself every time a minister invokes illness to implement a sexual “standard.” Likewise, arguing that our sexual choice, desire, and bodily autonomy are due to mental illness suggests that we serve an ableist and sexually repressive God. This God, apparently, must “fix” and “heal” us of schizophrenia because “the cup of our butt…the print of our vagina…cleavage” can be seen.

Just as we inhabit race, gender, and sexuality, we also inhabit our ability. Consequently, a multi-level pathway to the sexual liberation of Black women in the church must be considered at all times. Accordingly, in building a “sexual discourse of resistance,” we must ceaselessly resist ableist notions and criterion on what makes up a “good body,” a “safe body,” and a “sound mind.” We must be clear that invoking mental health diagnoses across the pulpit or in private conversation, in service to sexual repression, is theological malpractice. As Black women – with or without chronic illnesses – we must see ourselves (including our Blackness, our bodies, our minds, our sexual desires) as good, as real, as valid, and as primarily ours. We must divest from the notion that the bodies of Black women are only “holy” when they are subservient, covered, or bound to white, ableist, patriarchal, norms. And we must, as often as we can, refuse to allow our bodies to be subjected to other people’s convenient fantasies.

To shroud ourselves in shapeless apparel, as Bynum suggests, is a futile exercise – for this world already sees our very Blackness, womanness, and ability as problems to be “fixed.” The pursuit of pressing in harder, covering more, and performing our gender in ways that make others more comfortable, while detaching our personhood from our body, is a losing game.

We are not going anywhere.

And we have the right to be “aroused by faith,” aroused by a lover, and/or aroused by the goodness of our own bodies…at the same time. 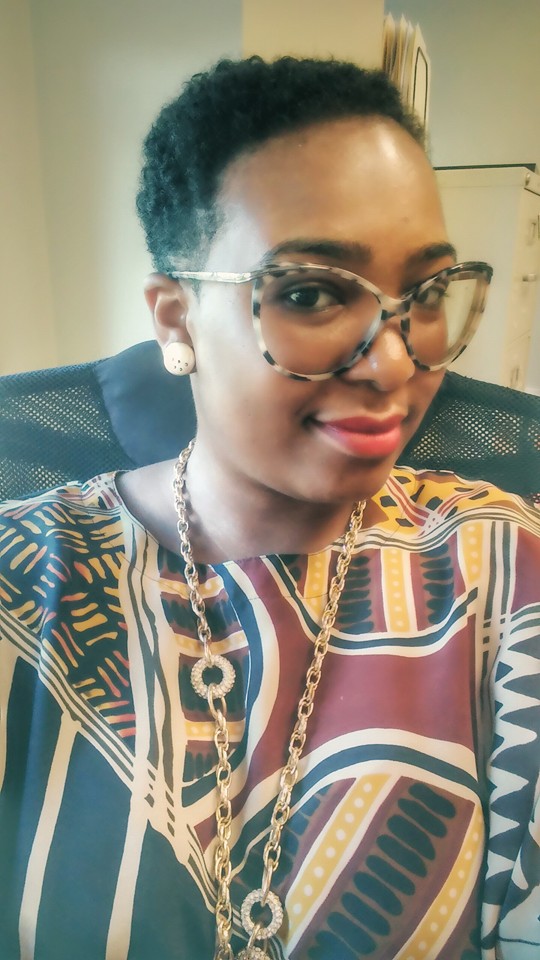 Jade Perry is a student affairs professional, working towards multicultural student success. Recently, she began working within the contexts of religiously affiliated institutions. She is an alumnus of The Pennsylvania State University, receiving a B.A. in Integrative Arts and an M. Ed in College Student Affairs. She is also a writer, contributing to various online platforms on culture and spirituality. Her mission includes offering information, ideas, and counter-cultural narratives that empower readers to thrive while challenging systems toward greater inclusion. Her informal mission includes facilitating laughter as a form of resilience. Follow her on Jadetperry.com or on Twitter @Jade_T_P.

Related ItemsableismBynumdeviant bodiesfeaturedfeminismJezebelKim BurrellNo More SheetspathologyschizophreniaSexslut shaming
← Previous Story #BlackSkinWhiteSin: Shielding Our Girls From Misogynoir…Even When It Comes From the Church
Next Story → #BlackSkinWhiteSin: What’s Next: a Bibliography, a Journal and You