EMERGING FEMINISMS, The Monstrous in Us: A review of Kaitlyn Hunter’s Over Sized Load – The Feminist Wire

Home / Academia / EMERGING FEMINISMS, The Monstrous in Us: A review of Kaitlyn Hunter’s Over Sized Load

EMERGING FEMINISMS, The Monstrous in Us: A review of Kaitlyn Hunter’s Over Sized Load 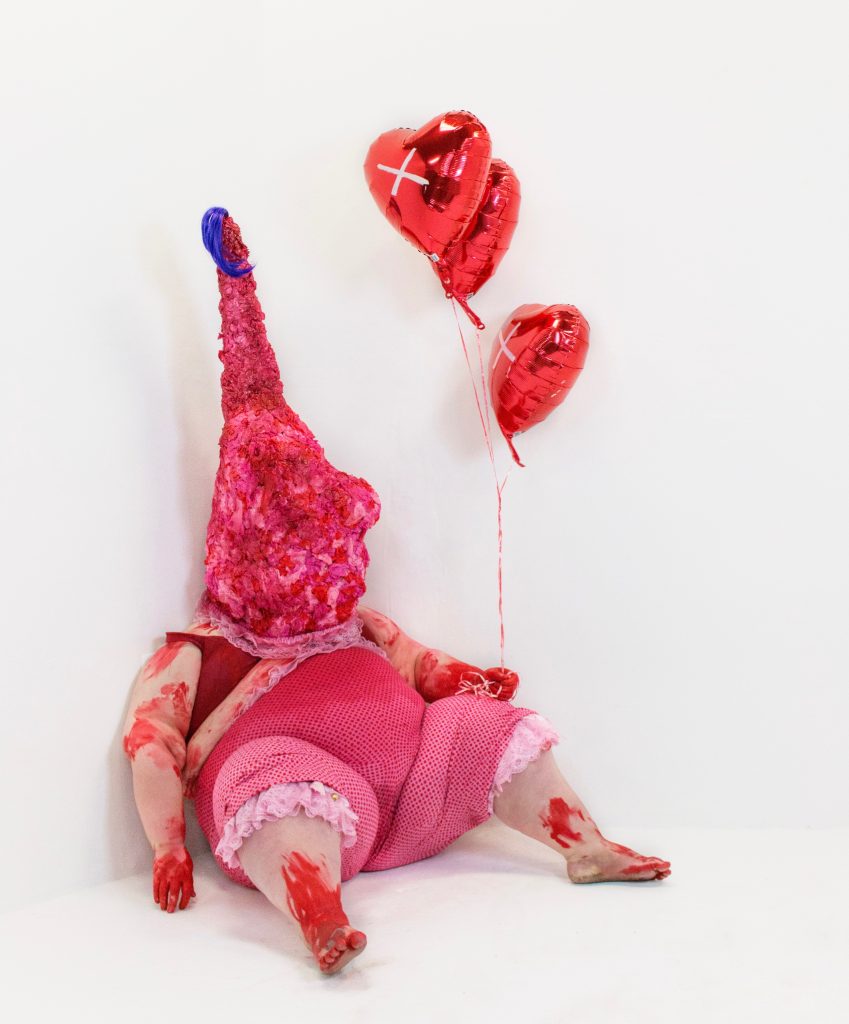 “Not Everyone Gets to Be Pretty,” performative sculpture by Kaitlyn Hunter.  Photo by Lindsay Jordan, 2015, courtesy of the artist.

“Not Everyone Gets to Be Pretty,” a photograph of the artist donning bloody, streaky red paint and a bulbous, red-and-pink hat, one that a model wore during the closing reception, coddled up in a dark corner, exemplifies Kaitlyn Hunter’s challenge to the “ugly” status quo. But moreover, her multi-media experience show suggests, it’s so much more interesting and fun, to be monstrous.

Pink fliers flank the walls outside of the Paul Mesaros Gallery at West Virginia University, with capitalized text: “OVER SIZED LOAD” prepare visitors for the frenzy they are about to enter, but also act as a royal backdrop, a la Hollywood red carpet, perhaps for Selfies and the like, extending the excitement and statement beyond the gallery walls.

Indeed, Kaitlyn Hunter’s MFA exhibition, Over Sized Load, weighs with excitement, prominence, and statement, but not without provocation. Hunter brings refreshing poignancy and positivity to the monstrous, or perhaps, monster-ess. 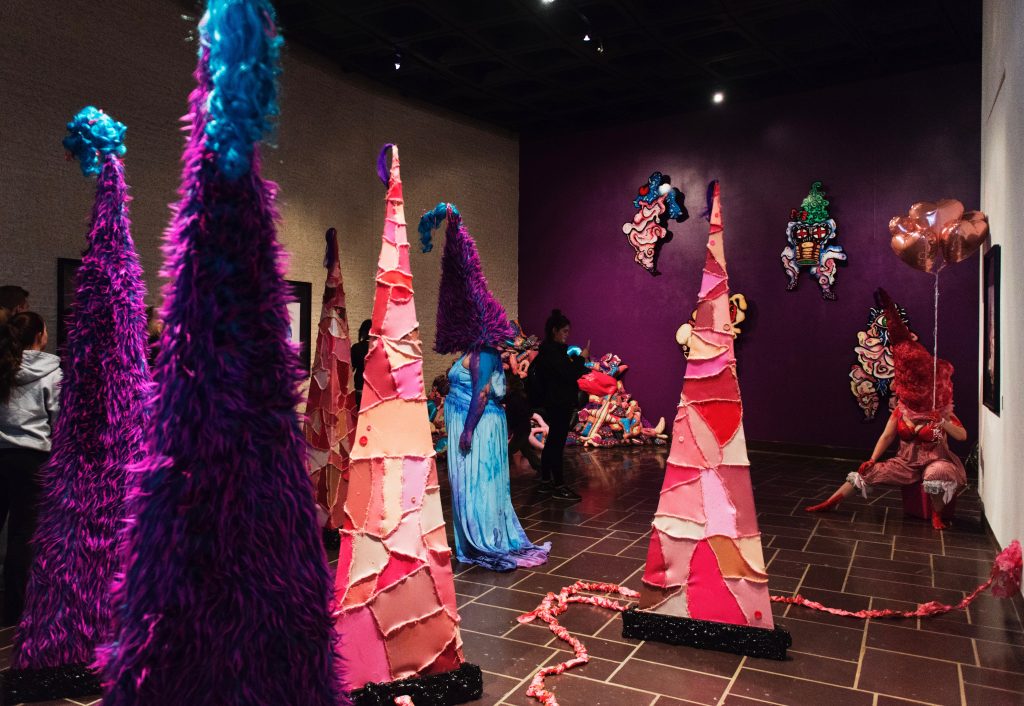 The entryway is prim and light, a pink bow-topped “O” along with the femininely-hued fabricated plush pillowed letters welcome visitors in, complemented by a neon pink bean bag, red balloon hearts, and vinyl multi-colored letters donning her name. The playful Pop-ness is too echoed around the corner with the five approximately eight-feet tall narrow hand-made pyramids of fur, rubber, carpet foam, and metal in bright blues, pinks, and purples, topped with blue and purple pony-tailed wigs, reminiscent of Dr. Seuss imagery and landscape. One shorter, approximately three-foot pyramid leads the pack. These “All the Sweet Nothings” sculptures bounce and vibrate as viewers walk around them, a fun yet jarring experience, perhaps pointing to the ridiculousness of life and those around us, everyone’s perspectives, voices, competing with our own. 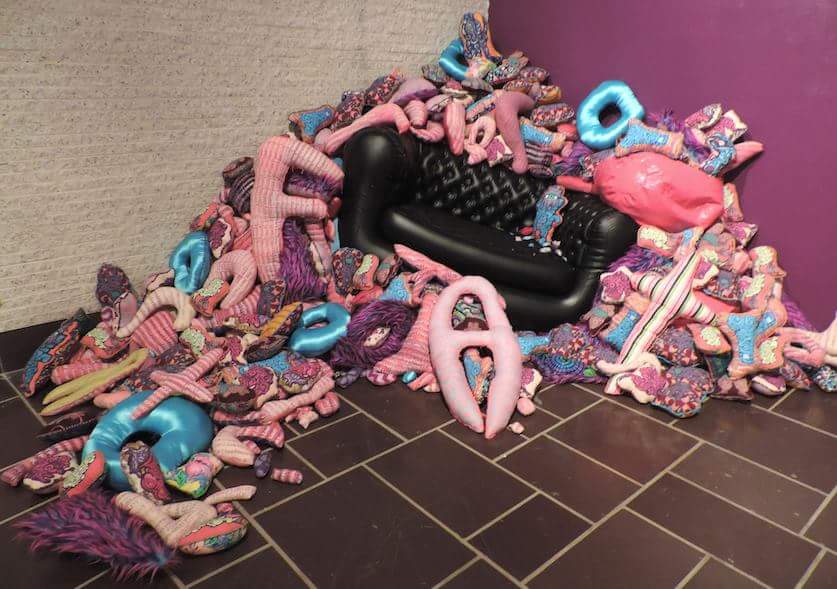 Exuding the bombarding of life’s preponderances is the back corner’s “Couch Potatoes,” a black couch surrounded by silk screen, fabric, fur, and fluff pillows in the pinks, blues, and purples, in biomorphic and alphabet shapes. Sitting on the couch seat is one of Hunter’s drawings silkscreened and made into a pillow, surrounded by tiny multi-colored sewn potatoes.

So, who or what here is the couch potato, the drowning biomorphic forms surrounding, or the tiny, harmless yet notably bizarre-one-eyed being on the couch?

Though, perhaps diverted with all of the playfulness and surrealness, reality awakes in the more austere yet still satirical vibe of five photographs showing Hunter donning (living?) her hand-made costumes. Her dual message is presented as much on the fabric as it is used in the sculptures.

Four of the five images of the artist were taken by Lindsay Jordan, in empty white atmospheres, distractions aside now, all eyes on the artist, but the artist’s eyes remain covered. The directness balances the play with a serious tone bringing her message down-to-earth. The artist forces us to “look” at her not away, as society and the media encourages us to do with “bigger” bodies. 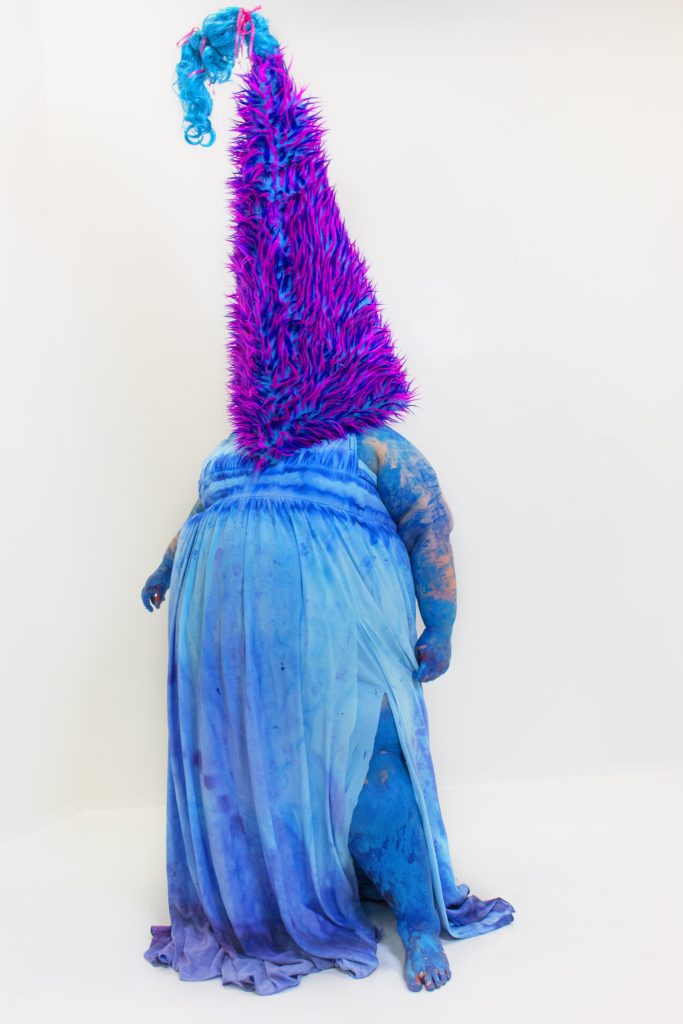 Kaitlyn Hunter: “I’ll Show You A Gorgon,” performative sculpture. Photo by Lindsay Jordan, 2015, courtesy of the artist.  This is one of the five photos that was part of the entire installation exhibit Over Sized Load.

“I’ll Show You A Gorgon” shows the artist in a striking erect pose akin to classic Greek sculpture figures, but hers is luxuriantly voluminous. The title refers to the Greek mythological nonhuman, considered dreadful, female character. Hunter’s costume of a rich purple and blue fur hat with bright blue shiny long dress and matching smurf-blue painted skin exudes pride, power, and provocation. Still, eyes concealed, we do not get to know her all. 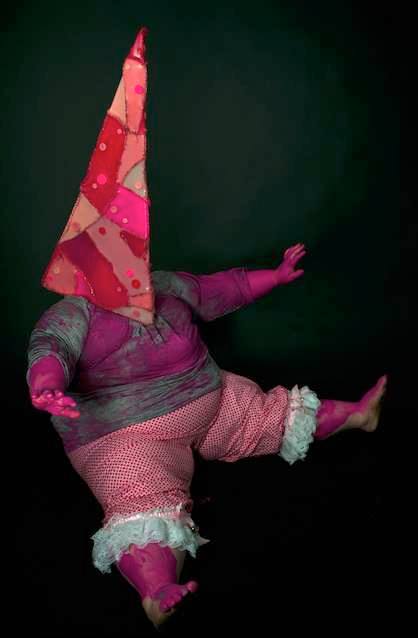 Kaitlyn Hunter: “Maximum Capacity,” performative sculpture.  Photo by Brittany Mick, 2015, courtesy of the artist. This is one of the five photos that was part of the entire installation exhibit Over Sized Load.

A similar message is in Brittany Mick’s photograph “Maximum Capacity,” which captures the lone image of the artist in costume with a black atmosphere. In a children’s styled pink outfit with pink painted skin, the artist’s head is covered with the triangular rubber pink collaged hat. Her arms and legs outstretched, sitting in what appears to be a corner, she echoes the title, at limit, unbalanced, and searching in this body shaming society. Too, the black allows for a reflection of the viewer—an intimacy and acknowledgement for both of our roles. The monster at the end of this [book] (viewing this exhibit I couldn’t help but think of Jon Stone’s Grover book about the fear of monsters), we are reminded, is you, and that’s okay—because you’re lovable and furry (as Grover), but moreover interesting, complex, colorful, royal, and full of life. 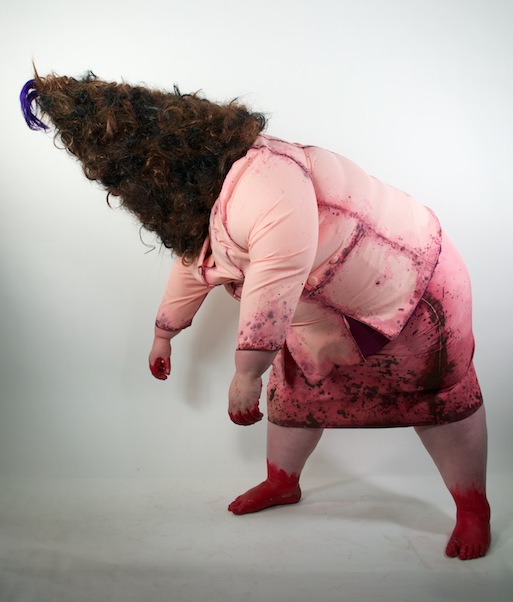 Kaitlyn Hunter: performative sculpture.  Photo by Lindsay Jordan, 2015, courtesy of the artist. This is one of the five photos that was part of the entire installation exhibit Over Sized Load. 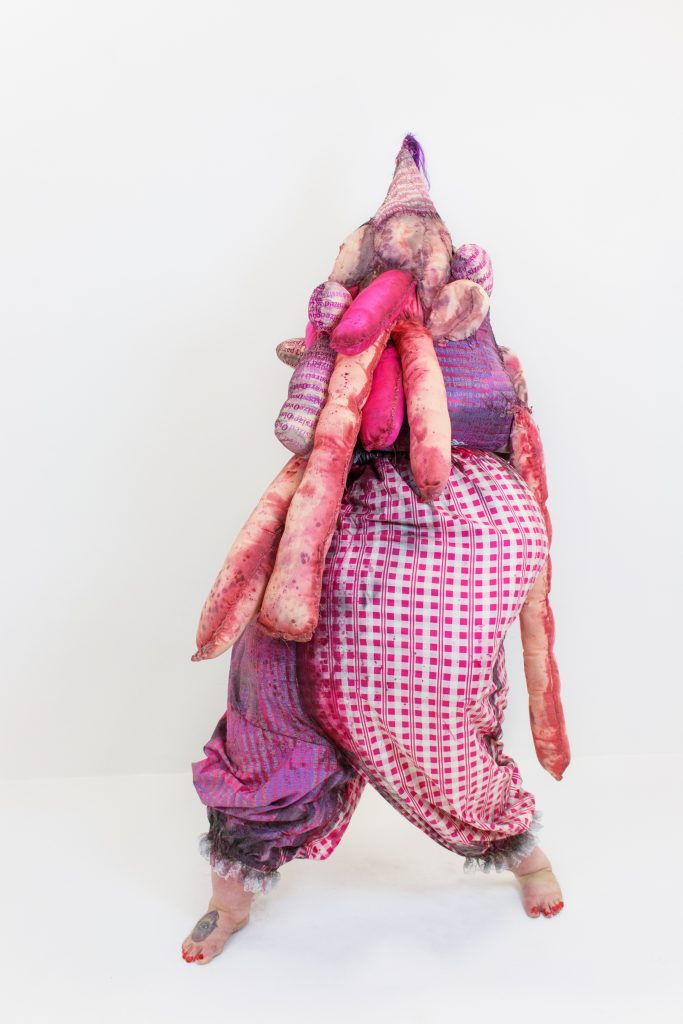 Kaitlyn Hunter: performative sculpture.  Photo by Lindsay Jordan, 2015, courtesy of the artist. This is one of the five photos that was part of the entire installation exhibit Over Sized Load.

During the closing reception, four modeled Hunter’s costumes (featured in the photographs referred to above), hauntingly with skin painted to boot. Unable to converse or even catch eye contact with viewers throughout, they moved their hands around, coddling their supposed monstrosity. Imperceptible eerie music played throughout like a contemporary carnival female humming as she gets ready for a show and bringing even more of Hunter’s direct and jovial approach to the entire experience. 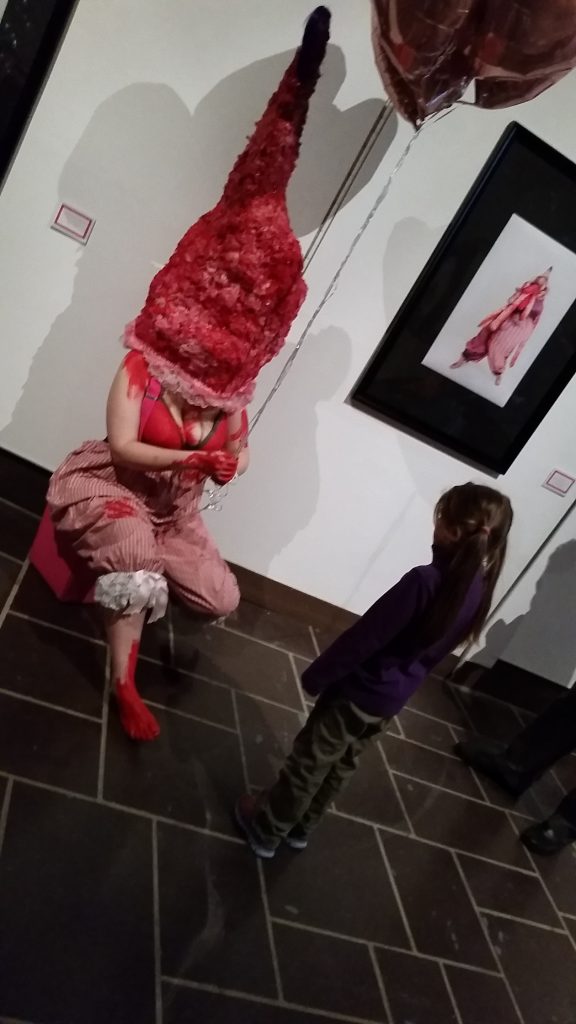 Entire experience it was—as Hunter jovially welcomed gallery-goers into the space clad in her, encouraging visitors (as her arms were inside unable to move) to take and wear her printed purple and blue masks. 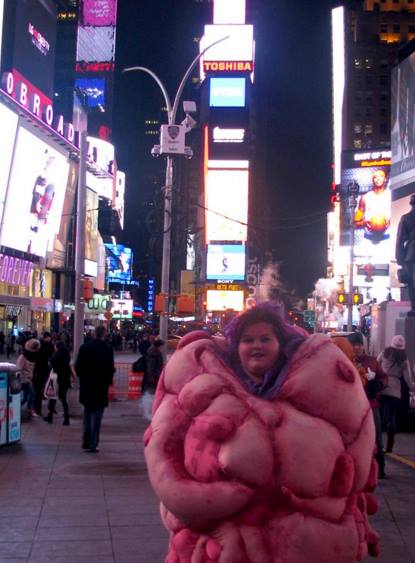 On the back of each mask was a quote by poet David Jones:

“You cannot create a monster and then condemn it.

When I look into
the mirror
I do not see myself,
but all of you
who made me.”

The prints exhibit Hunter’s luscious curvilinear line-work and playful, globular forms. Seeing the visitors walk through the space, brought another level of interactivity, creepiness, and mischievousness. After leaving this artful sensuous space, a warm kinship is garnered with fellow gallery-goers, and back into the grayness of the lobby, it’s…back to the real world.

Hunter’s dualities perhaps echo of finality for this major step as the Maine native graduates from West Virginia University, ready to take on—or put on–whatever is next. Her dexterity of reach will prove grand, I’m sure, as she made this an event to remember, giving out pins and stickers promoting her work, denying us to forget the message.

Hunter’s inspirations of Nick Cave, John Isaac, and Lou Bontacuse are evident in her technical craft, and multifarious and skillful execution. But Hunter, who won Sculpture Magazine’s 2014 Student Award, is coming to the scene with a powerful, timely, and thankfully emerging feminist statement about identity, gender, and the stubborn but continual balance between the ridiculousness and seriousness of society, patriarchy, body shaming, and life. Hunter’s work offers significant feminist insight that challenges such violence circulating all around us in the media and everyday society.

Will her eyes appear? Will there be games? I can’t wait to see what she does next.

Kaitlyn Hunter is currently continuing her craft in her studio in Door Yard Collective in Portland, Maine. Two of her performative sculpture photographs were on display in Surroundings at the Laura Mesaros Gallery, which closed August 18, 2016. Her website is currently under construction. 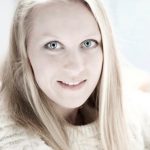 Sally Deskins is an artist and writer focusing on the perspectives of women in art. She is currently a candidate in the graduate program in art history at West Virginia University, where she was awarded the Carl Del Signore Award for her thesis research on the curating of Judy Chicago’s The Dinner Party. Her writing has been published in Bitch Magazine, n.paradoxa, TRIVIA: Voices of Feminism, Quail Bell Magazine, and Pittsburgh Articulate, among others. She curates the online journal, Les Femmes Folles, supporting women in art.