EMERGING FEMINISMS, Boys Will Be Boys – The Feminist Wire

EMERGING FEMINISMS, Boys Will Be Boys

Tell boys to start young
Look up our skirts when we’re not paying attention
And when they’re older and ask us to do it for them
They can spit in our faces when we deny them affection
Inform them of their divine right to satisfaction at all costs
Their right to pleasure, to completion, to cum
And when we don’t bow down, they can show us who’s boss
The world is not a place for us to feel safe
But merely a stage where lights shine on every place
And the curtain never closes because the admission is always paid

Tell grown men to give up, it’s not their job
They’ll be gone soon in any case
No use in trying to make a change this late in the game
Instead, let them be the judges and the juries
Give them the gavels and the robes
Put them in charge of sentencing the ones they used to be
They see themselves in these crimes
“Boys will be boys” trumps “an eye for an eye”
And we need to be reminded of who we are
Just a vessel for them to ride and some flesh for them to scar 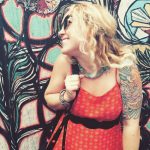 Chelsey Engel is a communications specialist for the United Steelworkers in Pittsburgh, Pa. As a writer, activist, and union member, she tries every day to use her work, and her words, as a means to stimulate change and positive action. You can find her writing on HuffPost Queer Voices as well as on Twitter via @msjusticetweets.

Related ItemsAcademiaActivismbody politicsboysCultureEducationEmerging FeminismsFamilyfeaturedfeminismGenderHealthheterosexismHistoryPatriarchyPoetrysexismsexual violenceViolenceviolence against womenWritingYouth
← Previous Story EMERGING FEMINISMS, 3 poems by Jordan Durham
Next Story → The Work of Waking the Sleeping in a Broken World: We Are Together