Back when we belonged

but didn’t know it,

we took away from

the front door, when

of raw milk, our ears hurt

through the thin seam

of our mothers’ mouths,

tales that could char

tongues to a black soot.

Our mothers who were

too scared to swim or curse

or drive, bent us with their worry:

half a world away, brides

windows for their dowries—

in the bleached sky.

Their words bit away at us

with their tea-stained teeth.

Even in our innocent,

by an unlit match,

our minds, a pot boiling over

with the salt and steam

of all we couldn’t imagine.

Mantra for a New Bride

rusting on your hands.

Forget you lined the part

in your hair red, the color

of brides. Forget your

you were never a goddess.

Forget they tried to light

you on fire. Forget

how to drive. Forget

you had a baby

of your skin. Forget

the rasp and resin

of your prayers rinsed

of the garden. Forget

to cover your face

of your name rising

The fall I was fourteen was all about flavor—

fingertips with color. Everything had a use:

leaf and root, hands and rolling pins. I learned

how to pickle and pluck, how to feed a family

that waited for me in some distant future

I couldn’t imagine. I trained myself to snap

and sing with coriander and clove, modeled

myself after women who clucked around

were thick with years of pushing dough

into place. As they orchestrated move after move—

with spice, I thought of what lay ahead of me:

all the chili powder and mint, all the steaming

bowls of summer humming with honeysuckle,

calling me from stove and pot, from the persistent 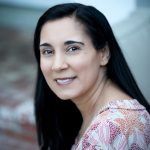 Vandana Khanna was born in New Delhi, India and attended the University of Virginia and Indiana University, where she earned her MFA. Her first collection, Train to Agra, won the Crab Orchard Review First Book Prize and her second collection, Afternoon Masala, was the co-winner of the 2014 Miller Williams Arkansas Poetry Prize. Other awards include the Elinor Benedict Poetry Prize from Passage North and the Diode Editions Chapbook Competition. Her work has appeared in The Missouri Review, the New England Review and Prairie Schooner as well as the anthologies Asian American Poetry: The Next Generation and Indivisible: An Anthology of Contemporary South Asian American Poetry.