South of the freeway fireworks spit

out the whole of July.

My friend says, no one cares if we burn

Past 30th we spark and catch fire

We brittle as palm leaves; we dry as

Here on 10th, we prop up cannons on

Here on 10th, dogs howl or cower as

cars with their jolting limbs crashing into

each other in the center

the center of my world,

my core of joy. Sometimes

it is too much and I have to shield

my vision, where I pain

easily. This is the concrete, asphalt and

chain-link Brother and I grew from.

When Brother tattooed this street

into his arm Mother thought:

now he would never leave. This was partial

truth. This street, these numbers

had dug their way into his ruddy skin

As a boy before cell phones chirped, buzzed or

pinged he’d call to his friends

down the street with a high pitched animal whistle.

This is the way 10th sings

city, sings of lives undiagnosed of witness and

hurt. Even the dogs learn this tune.

and I ask myself:

I try to enjoy Youngest Nephew’s

face as Uncle wows him by lighting

marking 10th with smoke and light.

Tonight I only see faces bright

with smiles and think nothing of

a few notes about public grief

1) don’t get angry, instead forgive, put up photos, take down photos, give away his/her clothes. no save everything.

2) don’t numb your pain with drink, smoke or sex.

3) don’t cry at work three years later because you hear a song that reminds you of him/her.

4) don’t slap away the fingers of a co-worker who tries to touch a locket of his/her ashes hanging around your neck. if you have to cry, do it politely or in a manly way or unobtrusively in a shower with the water running or in an individual locked bathroom stall. remember to nod your head yes when a stranger/ family member tells you he/she is in a better place now. nod your head to inane comments about “god’s plan.”

5) don’t scream or protest or grow small and silent. don’t get mad when your city can’t afford a sketch artist, or won’t indict or keeps on pushing back the trial, rescheduling and rescheduling, so you wait and you wait and wait, going back to court every six months for six years to have a chance to testify; a chance to say his/her name the same way you say love. if you come to the courthouse, try to look respectable. comb your hair back, wear minimal makeup, wear a dress but not too tight or bright. wear a collared shirt and slacks. shave.

7) don’t cry too much in public/courthouses because people will think you just want attention or there is something wrong with you. better get some help or medication. but if you never cry in public/courthouses that is just weird. better get some help or more medication. sit patiently, not looking too brown, too black or too poor. always remember don’t anger. don’t anger when police are quick to kill with hands or guns, whatever works. don’t anger when you realize that whoever killed your loved one will never be prosecuted. move on. let him/ her “rest” but don’t joke about death because death is no laughing matter. don’t talk too much about your memories of him/her because you are bringing everyone down.

8) one final note, if the death involves some kind of injustice don’t talk about that either. if you do you will sound too black or too brown–too angry. 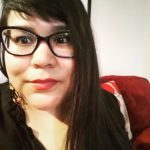 Bio: Casandra Lopez is a Chicana, Cahuilla, Tongva and Luiseño writer and educator who has received fellowships from CantoMundo and Jackstraw.  She has been selected for residencies with the Santa Fe Art Institute, School of Advanced Research and Hedgebrook. Her poetry chapbook Where Bullet Breaks was published by the Sequoyah National Research Center and her hybrid chapbook, After Bullet is forthcoming from Yellow Chair Press.  She is the managing editor of As Us: A Space For Writers Of The World.