Our friends are talking about our babies, but we haven’t got to the loving part yet.

They are looking at our skin, yours: burnt bread-colored because your parents are Japanese and Spanish and Jewish. Mine, penny-brown, because my Mami and Daddy are Deep South and Dominican-dark. Our friends show us happy teeth. They imagine our fictional babies, and call them omni-racial; they talk about how we could count the colors divided between us. My morena browns and coal-blacks, your Euro-whites, gypsy tans and Japanese olives. They talk about how our genes will mix and blush, that we’ll produce a new kind of good that comes out smiling and gap-toothed and blended.

They are saying we could create some post-racial rainbow because that’s what we need now, two nice people like you, who represent what has been neglected. Your children could make the world new and better. We don’t say anything. We laugh but don’t smile. We’ve never seen teeth shine with that kind of bright. When we were growing up, folks of all colors pointed at us and said, “Tell us where you’re from,” or “You are this thing” and “I hate you” and they gave us labels and we decided, after time, those folks didn’t know a thing. We have never seen these hopeful faces, aimed at us, before.

Really, you and I are brown fictions. We are fistfuls of colors that bear upon and burden us, but our parents shouldered the pain of all those colors, when they grew up, when they got to loving. We are young and only speak our parents’ language, sometimes. We don’t know how cultures should behave. We don’t think about the eye-length or nose-shapes of our babies. We don’t think about what we represent together or how to fix the post-racial lie, or how we can stop the pain pulsing in our bristling cultures because we are still deciding if we should love, and how.

You, me, and our friends are at your Oto-san’s bar on Steeple Street, the bar he bought with his Turkish friend Ricky. I am on vacation from school in Baton Rouge, and you live here in New London, always. We have been in love for three months, and that’s not enough yet.

Our friends are tittering and drinking vodka on the red plush couches in the front of this little joint. You have to set up the sound system for the DJs who are coming in. I follow you.

In the backroom, our mouths kick out half-phrases of hope. We tug at the edges of love-words, pluck out impossible futures from bar-smoke. What if you lived here and I lived there, or you were from this family and I was from that. When can we make this happen, should we, why do you like what you like, why do you say things the way you do, do we match, you can be mean and I can be mean. You are lovely, I am too. We are broken, and have been broken, should we break each other again with love…

Meanwhile, the music minds us. Silk-strewn jazz, unwinds underneath pops of thin instrument. A woman cries a song about a man who will never leave his dead city. We are talking about the little things tucked in the sound that remind us of our parents. I find a fat blue funk, rippling under the bass. I call the Thing soul-black or sabor-rich, because the histories in my skin perk up when they hear a Mami or Mama-drum. You are saying something about how you wouldn’t call sound culture, because when it dribbles thin out of the speakers it has no history nor color. You said you learned that when you saw your cousin spin “Superfreak” in too-bright Todai clubs, or when your students moonwalked in Majorca, or when you translated lyrics for your primo in Madrid who could out-rap Outkast. You said: everybody is eventually going to look like one thing and who cares what that looks like.

I’m saying nah and about to say something about Harlem history or bachata hips and the power of difference but your mouth hushes me. When we go back to see our friends, they see our hands clutched. They whistle. You order a second round, and we drink whisky and coke fast. Our friends grin, their grins are very loud.

There are other things we are thinking about. We find them more important. They are more important than our babies, or even where we live now. We wonder: what happens when the lightning in our teeth gets lonely. What happens when I can’t see the smooth lines of your body or your voice gets too sharp-tipped, cold-edged. You wonder what happens when I stop acting soft, when I become a full woman with new-feeling, weary flesh. The sort of woman who might go anywhere, become anyone. We wonder if we can make it past the month. The month after. Past the next year. As they talk, we realize our clasped-together hands are negotiating future. We think that this part, the negotiation, is its own kind of future.

Lydia is half-black and half-white, but she came out looking darker than a blueberry. She has wide, white eyes and brown-blonde, wooly hair rolled into a bun. Lydia grew up around white people, but now that she’s moved to the city, she has found all sorts of friends, of all colors.

One of her old classmates, Ben, knows about Black Stuff. He sees her at an artist’s party in the city, while she’s talking to other smiling white folks. Ben waits for her friends to finish talking, waits for a way in. When someone makes a joke about gun violence, Ben starts talking about Race in General. Ben says people don’t talk enough about Race. He says Race is a thing that should be on everyone’s tongues, everyone should always be thinking and talking about Race. Ben knows about Race. He knows Black People very well, he says. Ben is from Detroit, and black people like him a great deal. Ben says that most of his friends in college were black and they gave him a black card. He pinches his fingers and waves around an invisible card. The group at the artist’s party smiles in approval.

Ben talks about old school rap, and how much he hates pop rap, and his favorite football players, and that Idris Elba should be the next James Bond. He starts naming black women who are beautiful and says the darkest ones are the prettiest, not the mixed ones, and that the media is promoting white beauty and black women should wear their hair in kinky styles. He is grinning and the group at the party is grinning with him and nodding.

Ben notices Lydia isn’t participating in the conversation. He asks her if she likes several Classic Rap albums, and she doesn’t know what he is talking about. He notices Lydia doesn’t talk like his college friends in Houston. He asks Lydia where she grew up and she tells him. He knows that area, and knows Lydia’s father has money. Ben jokes that Lydia doesn’t know about the Struggle. Not like the Struggle his friends talked about.

Lydia tries to smile. Ben likes that she is trying. He is encouraged. Ben shoves Lydia. He’s playing, he says: “I’m playing.” Does she know what he’s talking about, he wonders? He quotes CB4 and Boyz in the Hood and Poetic Justice. He tells Lydia she would look bad with some sew-in braids. She’d look like the Struggle that way. He tells her that bad means good in the black community, means fine. Hot. Sexy. Lydia could be bad, if she wanted to, he says.

“You should definitely speak up,” he tells her. “We should hear your opinions, your voice. I’m the one doing all the talking.” He lays his snow-pale hand on her bare, black shoulder.

He is about to say something else, when he notices the thing that Lydia already knew. He sees the color on her shoulder and he sees that his hand is covering that color. Ben pulls his hand back. 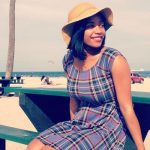 BIO: Jennifer Maritza McCauley is a Ph.D. candidate in creative writing at the University of Missouri. She is also an editorial intern at The Missouri Review, an associate editor at Origins Literary Journal and a reviews editor at Fjords Review. She has been published in various places in print and online, most recently Puerto del Sol, New Delta Review, Gravel and Literary Orphans.