You slide the bracelet over your hand, expecting it to fall straight down your forearm.

“Hey,” you say to your friend, who laughs at your delight, “It actually fits!”

The accomplishment of something so ordinary may seem unremarkable. But you can’t count the number of times you’ve surrendered bracelets to the dusty depths of a drawer because they fell right down your knuckles or slid all the way up to your shoulder. “One size fits all” doesn’t apply to you, because sometimes, under the fluorescent yellow lights of stores, you’ll slip hoop earrings over your elbows just to amuse your friends.

Growing up, you’ve always been thin. Skinny to the point of being sharp angles, all elbows and knees and bracelets of ribs, with protuberant nubs of bones that people mistook for mosquito bites. You didn’t hit seventy pounds until seventh grade. Even now, you’ve never broken a hundred.

Doctors would say that you weren’t normal. They demanded blood tests, as if being thin were some genetic disorder. As if it weren’t possible for people to be naturally thin.

“This won’t hurt,” they said, expecting a ten-year-old to believe their lie.

You cried when they stabbed the cold needle into your vein, the sharp prick of the syringe making your pain receptors scream.

When nothing abnormal marred the test results, they didn’t apologize. Instead, they told your mother that you should drink milkshakes and eat ice cream daily just to gain weight.

Since then, people have called you anorexic, a stick, a scarecrow, a waif of a girl. Never to your face, of course—those words only drifted by on tendrils of whispered conversation. But you wondered at their hypocrisy. Didn’t society tout “slenderness” as the ideal size for women? If you were “skinny” and needed to gain weight, and “fat” people had to lose it, then where did the middle ground lie?

The question haunted you for years, gnawing at your conscience, chipping away at your self-confidence, especially when you hit puberty and everybody but you started growing curves.

As a teenager, you’d flip idly through beauty magazines and walk casually past fashion advertisements, not realizing that societal expectations of beauty have infiltrated your quotidian life. Sometimes you’d stare at the models, wanting curves, until your friends told you between hitching sobs or furious swearing that they’d become victims of cat-calling and wolf-whistling. Why? Because they had breasts and hips, attributes that patriarchy stresses as the most important aspects of a woman.

You know that’s an insult to feminine intelligence, a misogynistic implication that a woman cannot have both beauty and brains, that she must be either smart or pretty but never both. Still, you wonder whether it’s worse to be called fat or skinny, obese, or anorexic, because now you see the signs of body-shaming everywhere: in the media, on the Internet, and worst of all, from other girls and women.

Knowing this, you sometimes sneak surreptitious glances at “fat” people, wondering how they cope with society’s poisonous words, because it’s obvious that fat-shaming is so much more prevalent than skinny-shaming. Nobody ever tells you to accept your figure—that your body is what keeps you alive—and as long as it’s healthy, it shouldn’t matter what you look like.

Instead, society belittles “thin” women by having them fit in size zeroes, as if saying that you don’t exist at all. Society humiliates “fat” women by calling them plus sizes, as if saying that they’re too big to hide from criticism. And the most painful truth of this never-ending war, you realize, is the fact that victims are fighting victims, “fat” girls and women curved by puberty and “skinny” girls and women flattened with childhood tearing each other down instead of building each other up.

This realization brings you back to the question that has needled you all through your adolescence: where does the middle ground lie?

The answer is simple: neutrality doesn’t exist in war. Body shaming turns girls into casualties, leaves them scarred and tearstained with painful histories that destroy them from the inside out—because according to society, unless you’re the striking image of a model’s long, slender hourglass figure with ample curves, then you’re not pretty.

But, you argue, that’s one of the greatest lies society perpetuates. They never tell you that those perfectly contoured models who dominate the fashion industry are photo-shopped, unattainable images, Barbie dolls that would snap in two at the waist if they actually existed.

What’s worse is that there’s another battle woven into the fabric of this war. Possessing the perfect combination of curves and slenderness isn’t enough—you’re also supposed to conform to white beauty standards, right down to the size of your nose, the width of your lips, and the color of your eyes and skin. You know some girls grow up taming their hair with heat, fighting natural texture, untangling their curls into straightened perfection. And you’ve been told, time and time again, that the fairer your skin, the prettier you are, because apparently porcelain skin is one of the markers of a “pretty princess.”

You wonder whether anyone ever tells children that, by painting them with the blood and rouge of beauty expectations, you’re turning girls into porcelain dolls.

And when porcelain breaks, it shatters.

Today, you still have trouble finding bracelets that fit your wrist. Your curves exist, but they’re so gentle, they can only be seen when your clothes hug your figure. The thing about “skinny” though, is that it’s strong. It endures, and it doesn’t have to stay white. Plus, you decide, if your beauty depends on what others think of your physical appearance, then you don’t want to be pretty at all. 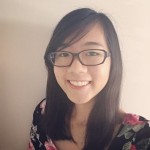 Sarena Tien, a hopeful trilingualist who spent a year abroad in Nice, France, is currently working toward a BA at Randolph-Macon College. Her poetry, essays, and articles have been published in S/tick and As/Us: Women of the World, as well as on TransitionsAbroad.com. When she’s not reading or writing, she can often be found folding far too many origami stars.