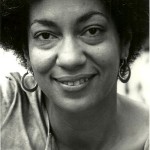 In 1984, just before I began journalism school at Columbia University, fate delivered me to the then-Brooklyn home of June Jordan. Thanks to a mutual friend, June had graciously offered me overnight lodging in her guest room. The next day, I’d say at about 11 a.m., June and I were alone at her house. Our mutual friend had left on an errand (as I recall). June motioned me to the living room where she put  a record (I’m pretty sure it was), not a CD, on her stereo. She was wearing a maroon turtleneck and overalls.

As the record began, I heard this kind of tinkling music, then a rhythmic beat and a woman’s voice (kind of high-pitched). I’d never heard the singer before. But could tell that she had what I’d call an infectious kind of groove going on. June danced around the room. Then she looked me dead in the eye and said: “This white girl is going to be a star.” The song? BORDERLINE. The singer? MADONNA.

For real! I could not make this up (smile!) Can’t say that I ever became a big fan of Madonna. Though do think she threw down with VOGUE. This is all to say that June was on the pulse of popular culture. No news there.  But still … it was an intriguing moment and memory for me. Especially after Madonna did, indeed, become a huge star. 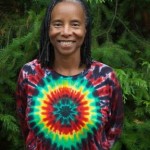 Evelyn C. White is the author of Every Goodbye Ain’t Gone: A Photo Narrative of Black Heritage on Salt Spring Island (Dancing Crow Press, 2009).  She is also the author of the acclaimed biography Alice Walker: A Life (WW Norton, 2004) and Chain Chain Change: For Black Women in Abusive Relationships (Seal Press, 1994). She is the editor of The Black Women’s Health Book: Speaking For Ourselves (Seal Press, 1994), and a co-author of the photography book The African Americans (Viking Penguin, 1993).

Ms. White is a 1985 graduate of the Columbia University Graduate School of Journalism where she was honored for her Master’s thesis on “The Racial Development of Blind Black Children.” She earned a 1991 Master’s degree in public administration from Harvard University and is a 1976 graduate of Wellesley College. She lives in Halifax, Nova Scotia and is passionate about okra. Recent work includes an essay about her journey as the official biographer of Alice Walker and a tribute to the late jazz singer Ernestine Anderson (1928-2016)