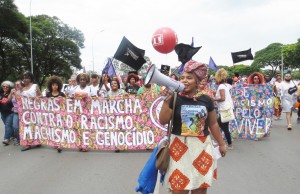 The Movement for Black Lives, or as it’s more commonly known, #BlackLivesMatter (BLM) in the United States, has grown beyond a call to action in response to police brutality and the extrajudicial killings of Black people—Trayvon Martin, Michael Brown, Eric Garner and too many others—to a movement that challenges multiple layers of racial inequality. BLM has also sparked a global conversation about racism, for example in a Europe dealing with increasing xenophobia and racial intolerance in the midst of a refugee crisis. A continent away, in South Africa, the student-led #FeesMustFall protests shed light on hikes in university fees that would exclude mostly black students from accessing their right to education, triggering solidarity actions by students in the UK and USA who have been grappling with similar issues.

Within this global conversation about institutionalized racism, Black women have put forward an urgent critique of the media, researchers and advocates’ tendency to focus on Black men’s experiences of racism. “That ‘black lives matter’ so quickly gets mentally translated into ‘black men matter’ is less a product of racism than one of sexism,” writes Kendra Pierre-Louis, “Issues that affect men are social issues; issues that affect women are ‘women’s’ issues.” 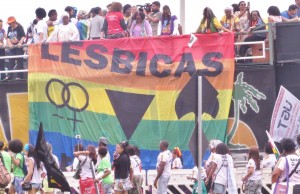 Campaigns like #SayHerName are challenging this male-centric narrative, ensuring that names like Sandra Bland, Yvette Jones and Rekia Boyd are not erased from the full picture of racial injustice in the USA. More recently the conviction of serial rapist Daniel Holtzclaw, a former Oklahoma City Police Officer who assaulted 13 Black women while on duty, has lent an even more urgent lens on how gender, race and sexuality work together to inform police abuse of Black women. In South Africa, alongside #FeesMustFall, #PatriarchyMustFall has also raised the question of what it means to have intersectional movements that understand how black women face multiple levels of oppression..

In keeping with this global reclamation of space and discourse by Black women within movements against racism and discrimination, over ten thousand women converged on Brazil’s capital to protest racial inequality and violence on November 18. Marcha das Mulheres Negras (the March of Black Women) was a “historic moment”, according to feminist, Raquel de Souza because, “this march was the first time that black women from all over Brazil have gathered together at this level, at the national scale. To march led by women [is important] because, you know, in the black movements in Brazil, [many of the visible] leaders are black men. So for women to come together like this is a powerful statement.” 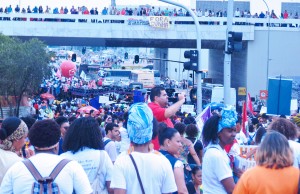 For Black women in Brazil the statistics tell a story of just how much they are on the frontlines of racial inequality and injustice. Black women earn the least of all population groups. In 2013, the average salary for black Brazilian women was R$803.68 (US$327) per month, more than R$200 less than black men and more than a thousand reals less than the average for white Brazilians. According to the 2015 Violence Map: Homicide of Women (Latin American Social Science Institute in coordination with UN Women Brazil and the World Health Organisation), the number of black or mixed race women facing violence grew by a staggering 54% between 2003 and 2013, rising from 1,864 to 2,875 in the space of a decade. Violence against white women in the same period decreased 18%. Between 2001 and 2011, every 2 out of 3 victims of femicide was black. “Black women are exposed to direct violence in which they are fatally victimized, impacting the children and the people close to them…” said Nadine Gusman of UN Women Brazil, “It is urgent to create public awareness around racism and by promote institutional responses to support Black women.”

Marcha das Mulheres Negras proved to be a profound act of defiance, breaking the silence on racism and sexism, and allowing Black women to be visible in a way they have not been before. Planned over more than two years, this action was a critical moment for the movement against racial inequality in Brazil and for Black women organisers who have worked to make their issues visible at the national level. Thousands of demonstrators took over Brasilia’s streets, bringing the city centre to a stand-still and capturing the nation’s attention. This revolutionary action even pushed President Dilma Rousseff to “reaffirm [her] commitment to the struggle of black women” in a meeting with key leaders and representatives of Black women’s organisations around the country. An important statement in the wake of Brazil’s move to impose harsher penalties on perpetrators of femicide earlier this year. 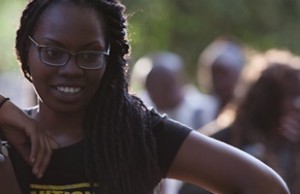